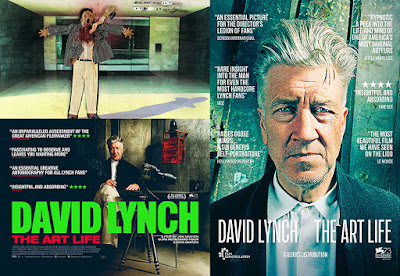 There’s a moment in Jon Nguyen and Rick Barnes’ new documentary film David Lynch - The Art Life where Lynch is in the middle of recollecting a story about the day his family moved to Virginia and he stops telling the story because it’s too intense a memory for him to want to go on. Presumably something bad happened involving the father of one of his friends but we never get even a clue as to what the famous director was about to say and, after a few minutes of talking us through and setting the scene of the ‘incident’, he just leaves us hanging. At no point in the movie does he bother to go on with his story and it’s this lack of disclosure about something which may or may not have had any bearing on him as an artist, which I’ve become accustomed to in this man’s work over the years.

I became an admirer of the director when one of the TV channels over here, it may well have been Channel 4, gave the movie Eraserhead its debut broadcast (must have been late 1970s or early 1980s). I watched it on an off air recording the next morning and really wasn’t sure about it but knew I had to show my dad this unusual film before the day was over. My second viewing really got to me and it became one of my favourites, even as my dad vowed never to watch the movie ever again. Although I like a lot of the David Lynch movies I’ve seen over the years and, also, loved two of his TV shows (Twin Peaks and On The Air) when they were shown in the UK, for me it’s Eraserhead which will always mean the most to me. It’s a great little movie and it’s worth looking at on a big screen, if you’ve never seen it in the cinema.

David Lynch - The Art Life is basically 88 minutes of the artist/director talking about his early life while we are shown shots of Lynch as he is now and working on various art projects which are juxtaposed with archival footage and photographs illustrating the subject on which he is speaking... which amounts to a long monologue about his early life from birth and leading up to the shooting of his first feature length movie, the aforementioned Eraserhead (which is where this movie finishes). Mostly, then, the documentary is free from movie references (other than the artists desire to go to a prestigious film school at a certain point) and mostly talks about the man’s dedication, throughout his life, to fine art.

And it’s an extremely hypnotic and quite fascinating study of the man.

The film has an interesting atmosphere because, quite apart form the pin sharp cinematography and the way the camera moves around various, quite beautiful black and white photos of places and situations in the artist’s life, it soon becomes apparent that... although Lynch is the only person seen in this movie apart from his latest daughter (who seems to be named after one of the characters in Wild At Heart) in some scenes (and not including the archival footage where people like his first wife are also seen), the camera is never resting on him whenever he is speaking. All the stories are recorded and, presumably, dropped onto the final cut, without the talking head kind of point of view shots one might normally expect in this kind of film and this crutch of seeing what you’re hearing being taken away at a visual level seems almost like another form of a lack of full disclosure, which I tend to associate with the director's work so... good call guys.

Now I don’t know much about Lynch himself... other than a few anecdotes I’ve heard him tell over the years and from having seen some great movies he’s directed but, as the man talks, while we are shown shots of him manipulating textural, gungy stuff on one of his works of art or painting on the surface of croissants to stick onto another piece, I noticed that the laid back kind of rambling, “no rush to get where I’m going” style of storytelling the director is engaged in was something I’d heard before. It hit me after a while and I suddenly made the connection to the soundtrack of David Lynch’s feature film prequel to his hit TV show, Twin Peaks - Fire Walk With Me. On the album (and in the film, obviously) there are a couple of tracks by a ‘group’ called Thought Gang and one song, A Real Indication, features exactly the same kind of speech patterns/sentence structures, in rhythm to the jazzy, slightly twisted melody, that Lynch is using in his sentences in this documentary. Now, I’d always suspected Thought Gang was really just Lynch and his much used composer Angelo Badlamenti and so I checked it out earlier today and, sure enough, it is Lynch and Badlamenti. I’d always liked that song and so maybe that’s why the vocal accompaniment to the visuals on David Lynch - The Art Life felt so, somehow comforting, to me perhaps.

Now, it has to be said, not much big stuff happens in the movie but even so, I was swept away with it right from the opening credits and the film whizzed by so fast that, although almost an hour and a half had gone by, I thought I’d only watched about a half an hour and really could have done with this movie being three times as long as it is. For a documentary where nothing much goes on, it has a fairly blistering pace, in some ways. The score by various people, too, is actually very suited to the material and adds a layer of Lynchian atmosphere to certain parts of the movie. It’s a shame that this music doesn’t seem to have had any kind of commercial release because it’s definitely a score I would have liked to have snapped up on CD at some point for a stand alone listen but, alas, that doesn’t look like it’s on the cards.

Nevertheless, David Lynch - The Art Life is a pretty cool movie and, because it tends to steer clear of the artist’s work as a director and focus almost, but not quite, exclusively on other things, it’s also a good thing that you can watch if you’re not familiar with the director’s movies. It’s certainly a movie I would recommend to anyone who is interested in hearing people talk about themselves and it’s definitely, I suspect, something that I could watch a few more times and not get bored. It does tend to leave you wanting more, truth be told but, in all honesty, that’s really not a bad thing and films that can whet your appetite are always hitting the mark, as far as I’m concerned. This film is a wonderful time capsule about one of the most interesting and memorable artists working in cinema (and in the art world) in the late 20th and early 21st centuries and, as such, deserves to be seen. So go see it.
Posted by NUTS4R2 at 13:21