Doctor Who -The Doctor Falls 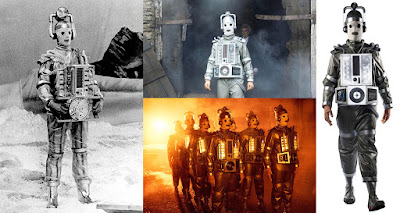 Stuck In The Puddle With You

Well this one was both spectacular and quite disappointing, to be honest.

As a series finale it’s a bit of a dud because all of those little mysterious questions that the writer asked us to invest in at the start of the series were just thrown away, left unanswered. As this show started and the virtual village which was a part of the starship from last week was attacked by cybermen, I was pretty sure the little girl was going to grow up to be either Bill or Bill’s mother. Alas we never found out and, since The Doctor is obviously now going to conveniently forget about the constant danger to Nardole and the fleeing colony altogether, it seems unlikely that any kind of closure on Bill and her mother is ever going to come to us. Which is absolute rubbish.

So, okay… the good stuff.

Well, The Master as played by John Simm and Missy as played by Michelle Gomez had some nice scenes together. And the fact that they ended up killing each other… with The Master presumably escaping to regenerate into Missy and with Missy supposedly finally dead… well, it looks like Moffat wasn’t that interested in leaving his successor much in the way of one of The Doctor’s main arch villains to play with. Or maybe it’s an easy fix… a writer writes.

We also have some truly nice work by Pearl Mackie in this one as we get to see her character as she sees herself… as Bill Potts… and also as the very first cyberman, which she really is now. There’s no going back for her from this but to have Mackie play much of the scenes as Bill allowed us some terrific emotional moments opposite Peter Capaldi’s always brilliant performance as The Doctor. And that great moment where she catches her shadow on the wall and it’s the shadow of the headpiece of a cyberman was terrific. Truly nice touch by Moffat and co.

And so there was all of that. But...
Okay, so the episode was really not answering any questions pitched earlier in the series, as I mentioned before but, beyond that, there were some really niggly  things too… in addition to completely forgetting about basic Timelord biology, that is.

So, okay, the Mondasian cybermen really are an upgrade too far by the BBC. The more I look at these things, the more I realise that they really are just a caricature of the original 1966 versions. The proportions all look wrong. These are too refined and not nearly as clumsy and clunky as those brilliant originals, it’s sad to say.

And then we have the upgraded cybermen somehow fighting alongside them and they’re just the same versions of them we last saw on the show. Oh really? None of the other gazillions of cybermen versions over the years? Just the last lot because, what the hell, they had all those costumes left over from last time, right? So, yeah, on the cybermen front I was generally disappointed all around. Not quite sure why composer Murray Gold waited for those versions to appear before he started weaving his cyberman theme into the texture of the score, either.

That being said, there was a genuine surprise near the end of the show that I didn’t see coming… and that’s always a good thing as far as I’m concerned. That being the reappearance of Bill’s alien water spirit, puddle lover from the first episode of this series, The Pilot (reviewed here) who  rescues Bill from her cyber existence to be her water lover from the stars. So that was… unexpected, at least.

And then we have the last scene where Capaldi’s Doctor, keeping his own regeneration at bay, comes face to face with David Bradley playing the William Hartnell first incarnation of the character. Yeah, was pretty sure he’d have to be turning up somewhere in this episode and here he was. Not sure how I quite felt about that, though, because I thought he looked somewhat less like Hartnell than he did when he played him last in An Adventure In Space And Time (reviewed here). Presumably this part of the story will be picked up later in the year in the 2017 Christmas special. Which, to be entirely honest, I’m really not looking forward to all that much.

And that really is all I’ve got to say about this one. A short review but, then again, I did feel kinda short changed on all the story threads here. I need a bit of a rest from the current incarnation of the show, truth be told, so I am happy for the big gap. I will miss Pearl Mackie, though, because I think she did some very strong stuff here and I will definitely miss Capaldi when he’s gone. Especially since his previous series on the show was just so good.
Posted by NUTS4R2 at 23:36