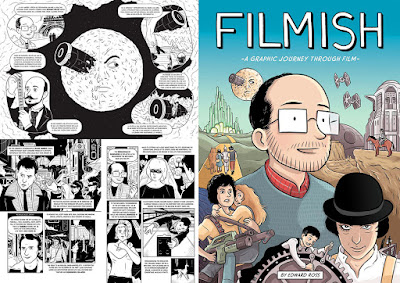 Let me just say right from the start that, although I have some pernickety criticisms of this tome, stemming from my personal passion and familiarity with some of the concepts expressed here, this is actually a great book and it’s certainly not intended to be a negative review. I hope it doesn’t come across as that but I thought I should clear that up right from the start.

One of my biggest worries before delving into Filmish, which is a comic strip in graphic novel form on certain aspects of the art of cinema, was that it would be too close to one of the dream projects I’ve been wanting to produce for years… that being a potted history of the cinema and the language of cinema through the medium of the comic book. As it happens, I needn’t have worried because, while there are some overlaps with what I have been wanting to do, the approach offered by the author here is a very personalised one and he doesn’t go about it in quite the same way that I would have (phew… there’s still room for my project in the world someday, maybe).

The book is presented in seven chapters and utilises a a crisp, clean and quite simplistic black and white line drawing style. It’s interesting because, although the majority of cinematic samples the writer uses to illustrate the points he wants to make are pretty popular, the style of the illustrations pare down the people depicted in a way that doesn’t always make their likeness that recognisable. That being said, it may be a likeness rights issue for all I know and, because the shots the writer has reproduced are just so lodged in the public consciousness, I'm sure most of the references would not be lost on people.

In the first chapter, The Eye, the author looks at the leap from the dawn of film from when early cinema was about recording and displaying the truth at 24 frames per second to when filmmakers like Melies began to astonish people by showing, in the most extreme ways, that film can be used to take people well beyond the harsh realities of living to be transported to an alternate reality. This is what film as art is all about, I would say.

The chapter then looks at the problems of the legendary ‘male gaze’ and then uses that to lead on to the way the point of view of an individual is not necessarily to be trusted. So, of course, Kurosawa’s adaptation of Rashomon gets a look in at some point. There’s also a nice, unnamed panel which accompanies the criticism of the male gaze which is an interesting side swipe at Michael Bay, if you recognise the shot as being Megan Fox looking at the car engine in Transformers… and it’s the smaller, unspecified visual commentaries such as this which add another nice little level to the author’s narrative.

Chapter 2, The Body, looks at the way the human body, in all its variants, has come under scrutiny as the language of cinema, such as the close up and the zoom, advances to capture it. This brings us right up to date with motion capture performance used as the basis of CGI characters where actors can physically inhabit a role in which they couldn’t practically perform before this technology became available.

There’s also the issue of race and the perception of it by various audiences tackled here, not to mention the way in which Hollywood and other countries use the cliché of the racial stereotype to push various agendas.

Similarly, the author takes a look at disability as a short hand for plot points and the way some films use it to define or highlight the difference of villains, in some cases. Among the examples given are the scarred face of Donald Pleasance’s Blofeld variant in You Only Live Twice, the dwarf revealed at the end of Nicholas Roeg’s version of Don’t Look Now (which is a questionable example for the point being made, I think) and the one eyed assassin played by Daryl Hannah in Quentin Tarantino’s Kill Bill. However, one only has to think of the hands of Dr. No, the teeth of Jaws in two Bond films and the bladed legs of the villainess in Kingsman - The Secret Service, to realise just how prevalent this phenomenon has been, and still is, in modern cinema.

And, of course, no look at The Body in cinema would be complete without a look at the ‘body horror’ genre from such directors as David Cronenberg and that’s exactly what we get here.

The third chapter, entitled Sets And Architecture looks primarily at the way these two elements send out important messages to enhance the tone of a movie… such as the hellish depiction of New York in Scorcese’s Taxi Driver or the classic, grimy decay of Los Angeles, November 2019 in the greatest movie ever made (so that’d be Blade Runner, then).

One of the interesting things which comes up in this chapter and which I’d never really thought about before, was how the main protagonists in the Star Wars movies - the Luke Skywalkwers, Anakin Skywalkers, Jinn Ersos and Reys of this world - are basically depicted as growing up in a rural backwater as opposed to the cutting edge technological environment of the bad guys (although I’m not sure that would stand up for characters like Darth Vader or even Lando Calrissian).

Of course, it also mentions the artificially distorted sets of German Expressionist cinema to create a particular statement although, bearing in mind the fact that the chapter is talking specifically about sets and architecture, I found it strange that one of the examples the writer chose to depict here is my blog namesake, the original Nosferatu (if I can get away with calling a movie adaptation of Dracula which couldn’t get the rights to Bram Stoker’s story and then just went ahead and used it anyway… original). After all, the architecture itself is not really distorted in this film due to it being, if memory serves, one of the few German Expressionist films (quite possibly the only one), to use outside locations for its shoot instead of creating them on a set like in The Cabinet Of Doctor Caligari (which is, obviously, also cited heavily here). I also can’t quite forgive the writer for confusing thrillers like Psycho and Se7en with horror movies. They so aren’t horror movies, people.

The fourth chapter is entitled Time and here the author talks about the way time can be 'captured' and transformed… although he appears to cling to a rigid belief in time as something more than just a way of looking at a perceived, man made measurement of linear consumption. Mind you, he does talk about the reliance of the mechanical process of film to establish that measurement and the inevitable way in which the audience perception of such can be altered through techniques such as editing and the way a linear chronology can be happily thrown out the window so… there’s that

In addition, he throws in a quick look at how the content of certain films can alter the way the story is perceived... such as in movies which use time travel as a central plot device, for example.

Chapter 5, Voice And Language, starts off with a look out how the human voice can be altered to enhance the feeling of what a character is all about. By way of examples he mentions Heath Ledger’s truly astonishing performance of The Joker in The Dark Knight and Linda Blair’s famous portrayal of Regan in The Exorcist (voiced by Mercedes McAmbridge if memory serves).


He also goes on to tackle the case of when the entire character is literally just a voice, such as the neutral, measured tones of the HAL 9000 computer in Kubrick’s 2001 - A Space Odyssey. Interestingly, the written language follows on from the audio of the original here in that the lettering used on the illustrations of HAL 9000 is in a much more neutral and formal typeface than the rest of the book… which is nice.

Next for this chapter is a look at how the voice can take on a life of its own and be the main driver of the film. He uses Coppola’s excellent The Conversation here but he also uses one of the lesser know but pretty cool horror movies of recent years, by way of demonstration. That being the language as lethal killing virus ‘zombie’ movie Pontypool (reviewed by me here).

In Chapter 6, Power And Ideology, Ross starts off by going straight for the throat and highlighting John Carpenter's look at the way messages of control are hidden in They Live. He then goes on to cover stuff like soviet propaganda (using all the usual suspects such as Eisentein’s Battleship Potemkin), Chinese nationalism as portrayed covertly in films like Hero and the western as a patriarchal ‘antidote’ to burgeoning feminism.

Included is the almost inevitable section on Reaganist cinema which also makes the point that female characters who don't want to fit into the traditional male stereotype of what they should be are depicted, therefore, as deranged killers such as the antagonist in Fatal Attraction. Another trend which Hollywood doesn’t seem quite ‘done with’ yet.

Another thing covered here are the financial incentives offered by the Pentagon, in exchange for censorship, which  can reward the film maker but with the added string of always showing the military in a good light. Which is nice and informative until the writer makes the big mistake, in my book, of referring to a much loved 1981 movie by the false (no matter how much Lucasfilm want us to adopt this unnecessary retrofitted nomenclature) title of Indiana Jones And The Raiders Of The Lost Ark. I’m sorry but that’s just wrong.

The final chapter on Technology And Technophobia makes the point that, for an industry that’s increasingly reliable on technology pushing the boundaries of what we are able to imagine, a majority of cinema exists by demonising technical progress with killer robots and such like. Even films like the beautiful Japanese ghost story Ringu seem intent to use our technologies against us (in that case, the watching and copying of a VHS tape are used to spread a virulent ‘supernatural terror’ amongst its victims).

It then goes on to explore the pervasive negative portrayal of biological technology too, such as films about organic creation gone wrong like Splice and, well... Jurassic Park. As a counter to this, of sorts, it also briefly talks about films which lionise the concept of consumer friendly technology, especially around the time of the home computer boom of the early 1980s. So there’s that too.

All in all, the clean lines and selective topics scattered throughout Filmish make the book an interesting proposition. I would say that, in some ways, the book is more for the novice in film rather than someone who has at least as much love and passion for film as the author. However, for people who have previously been less inclined to study film as a medium of artistic power, there are a lot of good ‘starting point’ ideas brought up and, thankfully, the writer includes an index of references used throughout to get you looking in the right directions. A good little tome to kick start an interest in the art of cinema and a solid recommendation from me.
Posted by NUTS4R2 at 19:20