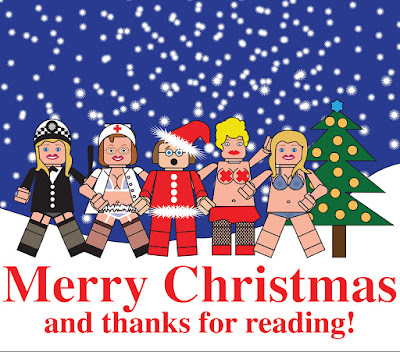 Merry Christmas to
all of my readers...

It’s been an interesting year and, once again, thanks to everybody who looked at this blog, even if it was only once... it’s always very much appreciated.

I think I’ve proven to myself that there’s absolutely no way I’m going to accurately predict what reviews are coming up in 2018, other than the usual end of year fixtures. Once again, I didn’t even get a fraction of the posts that I wanted to get done up here but, this year in particular, there’s a pretty good reason for this...

I’ll touch on this again in my inevitable End of Year Best Movies listing but I will mention here that, probably the main reason I’ve not got all the films watched and reviewed that I wanted to this year was because my cinema attendance was probably a fair bit greater than usual. Which puzzles me because I’m told that this has been the worst single year for cinema attendance since the 1980s. Well, that may be so but I can confidently say that, as far as I’m concerned, this has been one of the best years for interesting and rich film experiences in cinemas for quite some time. Also, it seems that the Americans have been making some extraordinary product this year too. So, I dunno... maybe when there are really varied and interesting films at cinemas... movies like Wonder Woman, A Ghost Story, Miss Sloane, Brigsby Bear and La La Land... then the kinds of people who do attend cinemas are maybe not necessarily actual fans of fine films. That is to say, maybe they’re there for the buckets of popcorn and an unwavering devotion to the, somewhat stagnant, blockbuster style ‘event movies’ where everything is edited together very abruptly and lots of things explode.

Not that I’m saying these aren't valid expressions of film as art... of course they are (and I love them too)... but maybe the kinds of collective audiences who make up these screenings are so fixated on this kind of, ‘almost exactly the same as any other’ dose of cleverly put together spectacle that they’re missing out on some of the more original and moving product out there. If that’s the case, we are in for a terrible time at the cinemas over the next few years as companies jostle to make an abundance of superhero movies (which are almost the only things which are making any money at the moment) at the cost of everything else. That would be a shame but, on the other hand, if they continue to go down that line then I’m pretty sure the already over saturated market will be delivering some truly worrying box office returns to the companies after a while... and then they’ll start panicking and maybe begin taking a few risks on different styles of cinematic art again... perhaps.

We shall have to wait and see.

Meanwhile, it will be business as usual at the NUTS4R2 blog. Things which I definitely know will be happening are the review of today's Doctor Who Christmas Special within the next day or so... plus the Best Movies of 2017 and, at some point in the next month, the Best Score CDs of 2017. And, of course, my Annual Cryptic Movie Quiz is up and running right here so, if you find yourself at a loose end over the next week, maybe give that a go.

Either way, though, have a very Merry Christmas and I hope this yuletide holiday brings you a brief respite from the strange horrors of the world right now. Have a great time.
Posted by NUTS4R2 at 08:43