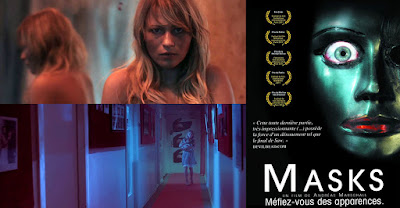 I’m not sure what one could classify Andreas Marschall’s Masks as (should one want to do such a thing). I’d like to say it’s a horror film but, at the end of the day, there’s no content in this to suggest that it’s any such thing... although I’m sure the odd viewer might find some of the murder scenes somewhat horrific. However, one person’s horrible is another person's jacket potato so, you know, slightly horrific does not a horror film make. I’d be more tempted to say it’s a giallo although, while certain genre tropes like the fetishisation of the weapon of choice for the killer are certainly in evidence here, I felt it didn’t quite really make the count on being a part of the wide variety of gialli which have come before it in cinematic history, either.

I guess then I’d have to call this one a drama/thriller but, to be fair, Andreas Marschall certainly uses the tropes and visual/audio syntax of these aforementioned genres and homages both the Italian giallo and the Italian horror film throughout the running time here... in particular the popular works of Mario Bava and Dario Argento. In the end credits, there is even a written dedication to both these directors and one other, the wonderful Sergio Martino but, to be honest, while it’s very easy to see either Bava or Argento’s influence in pretty much each and every frame of this movie, I couldn’t personally see anything specifically of Martino in the DNA of this film. So maybe this was just too subtle for me on the first watch.

Let’s be a little clearer, though, because it definitely uses the visual style of a certain famous Italian horror movie as its guiding principle and I’ll break it down a little more for you to call this what it really is. That is to say... I’ve never seen a movie which so much wants to be Dario Argento’s Suspiria than this one. And I don’t mean that in a derogatory way... far from it. I might, if the film lacked any of the kinds of visual panache or intricate sophistication of that particular tour-de-force but this one, Masks, really does it all so well. Fans of the Argento classic should really take a look at this one.

It has its own story, of course, but the resemblances in even the structure and basic plot points, while being quite different, have huge similarities and it would be impossible to imagine this film being birthed in any other way than for the director to be writing in all the elements that he loved of both Suspiria and it’s first sequel, Inferno, at the script stage. For example, there’s no ‘ballet school’ in Germany where the main protagonist goes to study... instead we have an infamous ‘acting school’ somewhere in an 'off the beaten track' location in Berlin... where the heroine goes to study.

The film opens with a look at the ‘method’ of the school's founding teacher, Matteusz Gdula, where a girl is tortured as incentive to improve her performance and make her craft more convincing. We then go into a title sequence where some footage is posterised to a great degree and turned red. It’s the absolute dead spit of one of the famous trailers for the 1971 Mario Bava movie A Bay Of Blood (aka Twitch Of The Death Nerve) in tone and I’ve seen a fair few title sequences from around that time done in this manner over the years too (mostly Spaghetti Westerns, to be fair). The similarity between the A Bay Of Blood trailer and this (albeit A Bay Of Blood kept changing the colour wash while this one stays in red) is quite astonishing and, given the director’s dedication at the end, I can’t see that there was any way in which this was a coincidence.

We then cut to contemporary Berlin (of 2011) where a not so great actress, Stella played by Susen Ermich, is failing her audition to get into a drama school. Then one of the judges breaks this to her he tells her of a certain ‘other’ school where he thinks she might do better. From that point on, if not sooner, the films plays out like a compressed and stylistic cross breed of Suspiria and Inferno with a little nudity thrown in, on occasion, for good measure.

For example, when her boyfriend drops Stella off at the 'kooky old school' they nearly run over a woman who is hurrying away from the school in a distraught manner. A little later in the film (and certainly not as early as Argento’s own pay off to his version of a similar scene in Suspiria), the girl goes back to the apartment of her friend. Since I remembered the opening ten minutes of Argento’s classic horror movie, I knew right away that the two girls wouldn’t be surviving the film for more than another few minutes... which, of course, was quickly proven correct. This is quite unfortunate in a way because it makes the film very predictable if you’re familiar with Argento’s body of work.

Another specific example would be the guy working the lighting when Stella has her audition for this specific school. He shines it in her eyes and, although not quite as subtle as the reflected light sequence which stuns Jessica Harper’s character in Suspiria, the effect and atmosphere are exactly the same. And the film goes on like this, using both familiar visual and audio tropes (the film has a somewhat Goblinesque score by composers Sebastian Levermann and Nils Weise which comes on a bonus CD with this deluxe, limited German edition of the movie) to create a patchwork quilt giallo/horror movie which, ultimately, doesn’t get to really be of either genre but, no matter... because the way it’s put together here is amazingly competent and riffs on all those great moments cineastes will remember.

So, yeah, you get the voyeuristic, smooth camera movement stacked together with shots of a black rimmed eyeball, the half drugged girl who is trying to investigate what is going on through the hazy miasma created by the pills she has been given, long corridors with fluid camerawork, large blocks of primary colour lighting and shots which are almost POV of the murder weapon chucked in and mixed around in the most stylish manner.

For instance, there’s an incredibly beautifully designed shot near the start of the picture where Stella climbs the stair well and we can see her, plus another character in the background on a different level and the screen is split by the various vertically diagonal sections created by the bannisters. It’s a remarkable shot, thrown away fairly early in the picture but a promise of things to come and very much a calling card to make you aware that you are watching a film put together by a director of some considerable talent.

There are also some not so great things about the movie too, though.

Asides from the ‘familiarity breeds predictability’ issue, for instance, there’s a scene when Stella sees a photograph of the girl who was fleeing the school and we get a flashback of that moment to really drum the point home as to who it is... except that it’s maybe less than three minutes since that scene actually happened so, seriously, who needs a flashback at this stage? Also, I hate to say it but by the end I was getting a little tired of the whole thing. I think the last half an hour of this movie, which is the point where it should be reaching a crescendo, could have been severely shortened in the edit. I was beginning to find the denouement just a little dull and sleep inducing, truth be told.

However, at the end of the day, this doesn’t detract from the fact that if you are either an Italian giallo or Italian horror enthusiast (or possibly a thrilling and hedonistic combination of the two) then Masks is a lovely little homage to some of the, admittedly, mostly popular films and directors in both those genres. Definitely a movie to track down if those areas are your thing and certainly an interesting film to run as the second feature on a double bill with Argento’s Suspiria, if you are in the mood. Not quite a giallo, not quite a horror but still pretty entertaining and with enough traits of those streams of cinema to hold the interest for most of the running time.
Posted by NUTS4R2 at 19:25