Everything I Know about Filmmaking I Learned Watching Seven Samurai 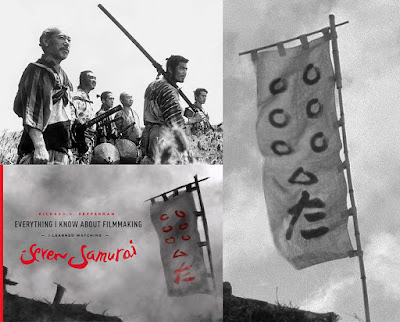 This book is a nice idea and the author, Richard D. Pepperman, comes more than recommended, in the blurb on the inside cover, as being one of the world’s leading authorities on the craft of motion picture making. That being said, while Kurosawa, my absolute favourite director, is certainly leading by example in all of his extremely masterful and influential films, I can’t quite get my head around the idea that everything you need to know is something that can be observed by watching a single motion picture. Still, it’s a good hook of a title and it certainly dragged me in. Frankly, anything with Kurosawa’s name on it is going to drag me in.

Everything I Know about Filmmaking I Learned Watching Seven Samurai is not quite what I expected in terms of size or content, as it happens. I should really start looking at those dimension specifications they give on Amazon when they ‘shop window’ these things because, far from being a coffee table tome, the book is actually almost as small as a standard paperback... just landscape instead of portrait.

I suspect the unexpected sizing comes from the idea that, if I were a film student, I’d be able to carry it around in a coat pocket and in his introduction to the book, Mr. Pepperman seems to imply that the book is meant more as some kind of scholarly aid as opposed to a general entertainment for the masses. Not sure I’d agree with that completely but the author has gone so far as to suggest that the book is accompanied by a screening of the movie as you read and, furthermore, has taken the timings and mini chapters of the Criterion Edition DVD as his point of reference to explain where he is in the film as he goes. Which seems kinda unusual, co-opting the great Criterion Collection into the structure of his book. Especially for readers like myself, who live in countries where the Criterion edition of the movie is not readily available.

As it happens, I have two different editions of the Criterion version of Seven Samurai, including their original, first DVD release with spine number 2 on it (spine 1 was a delayed release) and I am assuming the chapter stops in this book relate to their later re-release of the film (or possibly both). That being said, I opted to not take the writers advice on watching as I read because, frankly, I know the movie pretty well by now and there are a large number of screen shots from the film accompanying the text. In fact, as Mr. Pepperman describes each scene, I could pretty much remember the way the dialogue was spoken, the attitudes/expressions of the characters and what sounds and music was on the soundtrack as I read along, so I don’t think it’s completely something you have to do while you read, truth be told.

The book approaches the film with little bursts of text a paragraph or two long, often accompanied by a screen picture, followed by a ‘Lesson Learnt’ paragraph or two. I have to say that, many of the lessons in here weren’t really things I learned and I wondered at just how much of this was new to me as I was reading, a lot of which seemed more common sense and something which you pick up as you watch the work anyway. Of course, there’s always the issue that one person’s interpretation of a film-maker’s intent, especially when you are just putting one film under a microscope, can be something where more is being read into things than were intended but, at least with Kurosawa, I think it’s fair to say that he was pretty much aware of all the marvellous things he was doing and which Pepperman has rightly picked up on. Kurosawa is not a director who I would associate with the term serendipity, for example.

And it’s really not a bad book. Simply written it conveys many concepts and techniques that Kurosawa used in this movie.

For instance, deliberately leaving a character who is clandestinely observing a scene between two other characters in soft focus and having him come more into focus (but never in sharp focus) as he approaches the objects of his scrutiny. Or the practice of sometimes starting a scene transition off without an establishing shot and focussing on a specific character, only to cut to what he is suddenly reacting to as the main focus of an establishing shot.

With other ‘lessons learned’ occasionally having very rich pay offs like how a fade into a scene followed by a fade out can be used to smooth over a transition from night to day. Or the use of the sound of galloping hooves in the final battle scenes even when the camera is off in a different part of the village to maintain the audio focus of the peril of the sequence. These, along with other rich gems like the brevity of showing just the consequences of an action, rather than the action itself, are all something which students can learn from and, I suspect, is something that much of modern Hollywood could learn even more from.

As I read some of the writer’s observations, I couldn’t help but think of how one particular Hollywood motion picture seems to be a rich beneficiary of the kind of knowledge found in this book and how some of these techniques highlight how brilliant a certain director and the way her film was put together, adhered closely in some instances to the lessons that Kurosawa and others have gifted the cinematic art with. I was thinking, of course, of Patty Jenkins and one of the true masterpieces of modern American cinema which she bestowed upon the general public last year with her Wonder Woman movie (reviewed here)...

The use of slowing down certain actions such as Kurosawa does in a couple of moments in this movie is something which modern cinema has been doing effectively for a while (I don’t particularly like The Matrix films but I bet Kurosawa was well loved by the directors) and it’s arguably used in a different manner but I thought Jenkin’s use of this during certain small sequences of Wonder Woman were definitely an example of this kind of theatricality done right. I usually hate this kind of thing as its used these days but it didn’t jar and was, instead, used to highlight in a way which is, arguably, more in keeping with Kurosawa’s aesthetic. Similarly, the idea that Kurosawa, with Seven Samurai, wanted to make an action film which wouldn’t sacrifice or minimise the portrayal of the human characters at its heart is something I very much feel is one of the more potent and successful aspects of Jenkin’s cinematic feast.

One thing I did question about the book... and it’s something I need to check... is the fact that Kurosawa is ‘cutting shots mid action’. Now I knew he used to do this but Pepperman talks about this practice as being a “traditional and prescribed directive of the era”. Really? I thought that was kind of frowned upon in the mid 1950s. Indeed, I thought that when editor Peter Hunt brought that kind of ‘against the rules’ dynamic to Dr. No and the James Bond films which came after, he was being perceived as a little bit rebellious and breaking the rules. Perhaps, though, it was a way of doing things in Japanese cinema, at the time, which simply wasn’t in general practice in Western cinema? I don’t know, I’m going to have to explore that one further but it certainly raised the question in my mind.

Everything I Know about Filmmaking I Learned Watching Seven Samurai is fairly short and it’s a pretty quick read for a movie of such length. I’ve no doubt both students of film and those audience members who are less familiar with Seven Samurai will get a heck of a lot more out of it than people who have been watching it, off and on, for a few decades but even so, this book is an invaluable aid and certainly entertaining... especially if you are picturing the expressions and tones of voice of the actors as they deliver the lines in your mind’s eye. Not a bad book to find on any cineastes shelves but, and this goes without saying, not a substitute for sitting in a room and watching the work repeatedly yourself... the film’s riches are not as inscrutable as the reputation often associated with the nationality of the director.
Posted by NUTS4R2 at 21:42