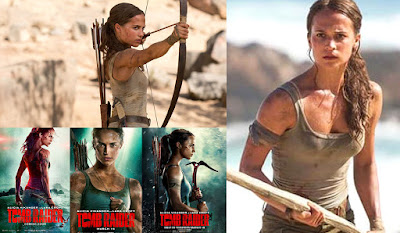 Remember when Robert DeNiro ate himself into all that extra weight so he could play Jake La Motta? Or that time when Christian Bale slimmed his weight down to almost nothing to play the central protagonist in The Machinist? This is what an actor does to get himself closer to the look and feel of the character he or she is playing. This is why I just don’t like Daniel Craig as James Bond. In the books, Bond has short black hair. Not smudgy blondy browny stuff (admittedly he has a facial scar too which they should have had right from the start of the movies). Anyway, this is why I can’t take the character of James Bond as seriously as the new films seem to want me to. Like Roger Moore’s version of the character... it’s just not James Bond unless they get the physical details right too.

Now do you remember when Angelina Jolie played Lara Croft for the first two Tomb Raider movies? She wore false breast enhancers because, presumably, she knew how integral the character’s huge bust size was to getting her characterisation right. I have those statistics written down in a celebratory magazine about the original computer game character somewhere. I can’t remember the exact size but the point is that they were important enough at the time that the game publishers knew exactly what the measurements were... possibly because her bosoms helped her keep her balance on crossing dinosaur filled chasms on precariously balanced logs, I should think. So, as much as I love Alicia Vikander as an actress... and I really do, she’s great... I really can’t take her that seriously as an on screen version of Lara Croft if she’s not trying to bring the physical attributes of the character into cinemas with her.

That being said... it’s totally not Alicia Vikander’s fault because, apparently, the various games which have continued the series long after I stopped playing them (I’d finished with the third or fourth game in the series, I think) have been completely contradictory with the various back stories and origins of the character as the series progressed and, yes, even to the point where they reduced her bust size... which is just crazy. I think they should have just been confident enough with the character to do the right thing by her and leave her exactly the same as she always has been and it’s quite sad that they should make these changes.

So, although I am quite offended that they have chosen to change all these things and reduce the character to a point where she completely loses integrity... yeah, I can’t lay the blame for that at the door of the new writers, director or star. Not their fault, I think.

As it happens, the new Tomb Raider film plays hard and fast with the legend of Lara Croft again anyway and she’s actually trying to make her pennies last in this because she doesn’t, by choice, have control over her potential inheritance. People seem to have forgotten... and so does the internet search engines, by the looks of it... that Lara Croft was originally born on something like January 10th 1968 (one day after my own birthday) and not February the 14th, which is what it was changed to a few years later to make a nice tie in with Valentine’s Day. The new movie is set contemporary to its release, which means the central character should be 50 years old now. So... clean slate and a reboot of sorts, it seems. Forget everything you thought you knew about Lara for this one because... they’re just making things up as they go for the movie.

It’s not a bad movie, though, despite having some fairly negative reviews...

Vikander is, as you would expect, excellent in the lead role (as she is in just about any role she takes on, as far as I’m concerned) and she pretty much carries the film. She is ably assisted by Dominic Cooper as her father (another character who has had a name change over the years), Walton Goggins as the villain Mathias Vogel and Daniel Wu as her new sidekick Lu Ren. And, yeah, it’s a straight up action adventure in the style of the original proposition of the first games I used to play... a kind of updated Raiders Of The Lost Ark with a female Indiana Jones figure front and centre. Or back and centre really because the third person gaming style engine on the originals meant you saw a heck of a lot more of Lara’s wiggly backside than you did of anything else, if memory serves.

And... contrary to some reports I’ve heard... it’s no better or worse than the previous Tomb Raider films and, since I quite liked the previous movies, that’s fine by me. It’s a straight, archaeology in action kind of deal and, although there are no new modern twists in the tale, which I suspect is the reason it’s getting something of a lukewarm reception, it is pretty well made and it doesn’t get too dull. Even though... and this is a shame... the story has been stripped of any supernatural elements and, perhaps, resembles more an episode of Scooby Doo in that it leads the audience in with the strong promise of a terrifying, death dealing super being and instead gives us a different and less incredible reveal than we were, perhaps, hoping for.

Still, it’s a fun film and I thought it hit a lot of the right notes.

Visually it’s very interesting because there’s a richness to the images and textures throughout. By that I mean that the director has gone out of his way to give the film a certain amount of depth to it. Not in terms of the 3D version I saw... the 3D is rather unnecessary here... but in the way that he uses various layers on screen to show the audience more going on in the background than they might get usually. It’s essentially the same trick that director Roger Corman used to use on stuff like his famous Edgar Allan Poe inspired films for AIP back in the 1960s... he always used to leave a door open into another room/part of the set to add depth and interest to the frame composition. Director Uthaug seems to be using the same kind of method here and it works fairly well. There’s never, visually at least, a dull moment.

That being said, my favourite part of the movie was the first twenty or so minutes, set in London, where the basic character of Lara is set up in somewhat contradictory form to what we have known from the character in the past. This includes a dodgy appearance by Nick Frost and a truly cool bicycle chase sequence that, alas, seems to top anything else that comes later in the movie. That being said, the director has at least tried to put in a lot of trade mark, physical ‘character situations’ from the game and you will see Lara stumble and fall and generally be placed in the way of various death traps during the course of her adventure. So that’s kind of nice.

Tom Holkenborg (aka Junkie XL) continues to show great proficiency as a film score composer and I’m pleased to see that this one, at least, has a CD release. It’s appropriate to the piece and has many nice moments which really help hold the movie together. My understanding is that he gave up the Justice League gig (reviewed here) to work on this one so I’m guessing he was a player of the old Tomb Raider games back in the day.

Ad there’s not much else to say about this one, I think. Other than stick around for a few seconds into the final credits to see another iconic piece of Miss Croft’s imagery added into the mix. A well put together action movie which has nothing really special going for it but which certainly succeeds in pretty much everything it’s trying to do. Maybe give Tomb Raider a go if you are a fan of the games or the Angelina Jolie movies.
Posted by NUTS4R2 at 19:09