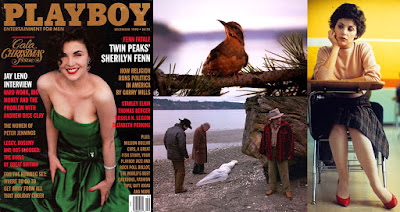 Well... it’s been a long time since I settled back down to watch episodes of Twin Peaks, I can tell you.

It’s hard to believe it’s been 28 years since I last watched these things. I remember it fairly vividly because it coincided with when I was studying for my degree in Graphic Design and all the other ‘kids’ were talking about it too. In fact, one of the things that sticks in my mind was that, when some episodes were broadcast, I’d have a few of my old school friends over to watch that week’s episode live, as it happened (yeah, that’s how we had to watch TV in those days kiddies... one week at a time) and my mother would bake us a cherry pie specifically so we could be chomping down and knocking it back with some coffee as we were all hypnotised by the latest exploits of Special Agent Dale Cooper and the residents of that small, surreal town.

I guess you can all figure out why I’m rewatching these now, though, right?

Lynch has now embarked on a third series which, maybe, picks up on things many years after the point where the second series came to an abrupt, cliff-hanger of an ending... albeit he’s doing it without some of my favourite characters in the latest incarnation. Now, I’m not blessed with having whatever digital channel have the exclusive rights to the new series, so I really have no access as yet ( please note, I wrote the first draft of this review last year, before my next sentence came to pass). However, I figured there must be a Blu Ray release of these new ones coming up sometime within the next year so I thought, since it’s been so long since I watched these things, that maybe it was about time I rewatched both the first two series plus the prequel movie, Twin Peaks - Fire Walk With Me, so my memory is refreshed for when I finally am able to see the new ones. I was going to watch my old Dutch gold box set of DVDs, which was out way before it got released in that format in either America or England and which, for many reasons, I never actually got around to watching when I ordered it decades ago. However, while I was hunting for bargains in Fopp Records I came across a real bargain with the new Blu Ray set being even cheaper than it is on Amazon. All 29 episodes, plus the pilot, plus the international version of the pilot with the closed ending, plus the movie prequel and gazillions of missing scenes was going for just £20... so I thought I’d pick it up and really revisit this great TV show again, in style.

David Lynch was a really huge name at the time this came out and we were all chomping at the bit to see the first episode. We were all expecting something a little surreal... which it certainly is, especially in the second series... and we’d also been warned, via the good old Radio Times television guides from that year, that the show would be a soap opera of sorts. What we weren’t expecting was the wide eyed 1950s innocent style of soap opera dialogue mixed with some really interesting visual designs and a strong sense of being caught up in the dark belly of small town USA. Although, I kinda guess we should have seen it coming after Blue Velvet.

Everything is fairly laid back and the majority of the first episode introduces us, fairly slowly, to most of the supporting characters as we share with them the discovery of Laura Palmer’s corpse, wrapped in plastic and murdered in somewhat unusual circumstances. The last third of the first episode introduces Kyle MacLachlan’s Special Agent Dale Cooper of the FBI, as he officially joins Sheriff Harry S. Truman (played by Michael Ontkean) to solve the mystery.

I hadn’t realised it at the time it was being shown but, each episode is meant to represent one day (and night) in the life of Twin Peaks so the series runs in something approaching edited highlights of ‘real time’... therefore, hot on the heels of Agent Cooper checking into The Great Northern Hotel at the end of that pilot episode, we join him hanging upside down like a bat in his room the next morning at the start of the second episode and things start to move along very quickly after that.

Twin Peaks is one of those shows you can’t really describe to someone... you just have to let them watch it and be slowly seduced by its dreamy charms. However, there were some interestingly eccentric characters and set pieces along the way in the first, very short series of just eight episodes (including the pilot) which everybody remembers, some of which became almost cliché when they were revisited more often in the show’s second year.

Like the dancing, thumb clicking dwarf played by Michael J. Anderson, inhabiting a dream world that’s possibly not only existing in the dreams of Agent Cooper and in which he and any other characters, perform and talk their dialogue backwards before the film is reversed to make more sense (more sense being a very relative phrase in the small town of Twin Peaks, of course). Lynch’s regular musical collaborator, Angelo Badlamenti, provides a wonderfully jazzy score which really comes into its own in sequences like this and Lynch’s other frequent flyer, vocalist Julee Cruise (who I was fortunate enough to meet once, very briefly) is also on hand in the series every now and again, both in vocal presence and as a singer in the show itself, to really help Lynch create a memorable and arrestingly haunting musical landscape for the town.

Another interesting character would be Catherine E. Coulson as The Log Lady. A lady who carries her log with her as a constant companion and who is willing to translate the log’s unheard response when  asked pertinent questions about the death of Laura Palmer.

And who can forget Sherilyn Fenn as Audrey, the bad school girl with a crush on Agent Cooper. Those dreamy dances and dangerously out of control shenanigans delight as she gets herself in and out of trouble and frightens away the Norwegians who were to have signed a deal with her father... a parent played by Richard Beymer, who is trying to burn down the lumber mill to grab the land... or is the soap opera plot of that one even more convoluted than we can possibly imagine? There’s a wonderful scene in the 7th episode of the series where Audrey auditions for the local whore house by taking a cherry stalk in her mouth and then tying a knot in it just by using her tongue, demonstrating to her future employer the skilled muscles available in her mouth to potential clients. That scene was talked about for months by people after it aired over here. I remember, it was quite quick that she had gotten so popular that she posed naked for an issue of Playboy magazine. That marked the one and only time I ever went out and bought an issue of Playboy (for the articles, honest guv). I still have it.

I could spend ages going through the whole cast of this terrific show but I’ll leave them there and maybe just comment that with Russ Tamblyn’s crazy psychiatrist character Doctor Jacobi... it’s nice to have two gang members from West Side Story present in the same show (Beymer being the other, of course).

Oh... and there was Bob. Bob, who would get even more terrifying in the second series, for sure.

At the end of the first season a load of threads are taken to an extreme set of cliff hangers. I remember everyone tuning in for the last episode of series one expecting some kind of resolution and instead getting faced with loads of plot lines leaving us dangling... such as Audrey finding out that the client she is about to service in her new sex worker role is none other than her father. And, even worse, the gun shot that fells Agent Cooper at the very end of the last episode and which wouldn’t be resolved.... very, very slowly, if I recall correctly... until the following season’s opening.

People wanted more of this and, at that particular time, the network which would go on to cancel it at the end of Series Two were only too happy to let Lynch and Frost give it to us... although it wasn’t entirely on the creators' terms, if I recall correctly.

If you haven’t ever seen Twin Peaks, get yourself hooked up to it because it's quite wonderful (and quite powerfully heart stopping in certain moments of Series Two, if I’m remembering correctly). Essential television viewing which stands above a lot of TV history and which will transport you to another state of mind, especially if you bring a slice of cherry pie to watch it with you. Now I’m going to catch up on the second season so, you know... I’ll report back here eventually. Perhaps when the brand of gum I like has come back into style.