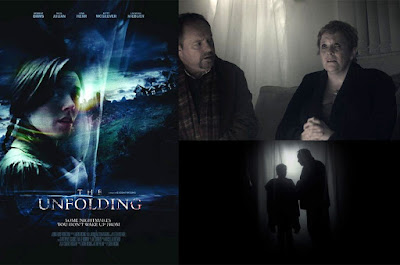 Warning: I need to discuss something specific about the end and that means their are spoilers in here... sorry.

The Unfolding is a British film entry into what technically comes under the ‘found footage’ genre of horror movie and which was directed on an extremely low budget over a number of years. It looks and feels a little cheap, to be fair but... mostly it gets around perceived production values because of the nature of the format of the material you are watching... I’ll get to that particular ingredient of the movie in a minute. It’s actually quite a nice little movie and, considering the budget and the time put into bringing this idea to life... well... it’s really worth a watch if you are into the ‘haunted house’ genre.

The film starts off with the car journey, involving two of our five main protagonists, to a house in Dartmoor and we see everything from the point of view of one of the characters holding the camera (they take it in turns) and, of course, the footage is all nicely edited together. They make stops on their trip to take a look at certain aspects of the rainy, windy and misty scenery (including a ghostly hound which shimmers in and out of existence through the mist on some far away rock - shades of The Hound of The Baskervilles, perhaps?). Meanwhile, the car radio tells us of unrest in the world and the news is a constant thing being referred to on radio and TV sources throughout the film... that the world is on the very brink of global thermonuclear war.

Meanwhile, our two lead characters, Tam (Lachlan Nieboer) and his girlfriend Rose (Lisa Kerr) are heading to meet some friends in said haunted house. Tam is researching paranormal activity for his university work but the first signs that the couple are going to get more than they bargained for is when they arrive very late (because of all that sightseeing) and their friends are all leaving. Said friends urge Tam and Rose not to stay but they are out of their fairly quickly and one of them gives Tam the key so ‘our heroes’ can let themselves in. Once there, various cameras are set up so that any paranormal activity can be recorded as and when it happens.

It doesn’t take long for the spooky shenanigans to take hold and, as the film runs it’s fairly predictable but nicely executed course, more characters are introduced into the text, starting with Tam’s best mate Harvey, played by Nick Julian. After some fairly unsettling events such as cutlery embedded in the kitchen walls, rooms trashed unheard and the usual scary noises that such films use to create unease and tension in the viewer, Tam calls in his tutor Professor Chessman, played by Robert Daws, for expert advice and to help keep them on a straight path. It’s clear to the gentleman in question that the events at the house are probably the most explicit and clear he’s ever seen so he leaves the three overnight to go and get his ‘medium’ friend. All the while, of course, the script never lets up about the possibility of impending nuclear apocalypse and this leads to a nice line when, as the Professor leaves the three youngsters in what has fast become the ‘house of hell’, he turns around and says something along the lines of... “considering what’s going on out there, this is probably the safest place for you”... which is kind of unsettling.

Indeed, when Harvey wants to leave it’s because he has a conversation (off screen) with his long dead brother who says he wants to help him but he can’t and that, in a little while, it won’t matter anyway. So, yeah, the filmmakers aren’t really hiding where this is all heading but, you know, I posted the spoiler warning anyway on the off chance some people won’t figure out the ending within the first five minutes of the start of the movie.

When the Professor returns the next day, he has his 'medium' friend, Muriel, played by Kitty McGeever and she finds all sorts of stuff out. The house is a magnet for various spirits that need laying to rest and the current worldwide threat seems to be causing the house to act as a kind of magnified focal point to all the activity. After she helps one spirit on its way she comes across another spirit of an abusive murderer who makes no secret of the fact that he doesn’t want to pass to his resting place and, in fact, wants to kill them all. And that’s when things start to really escalate for a finale which is, in all fairness, a bit of a hectic, somewhat rushed and confusing denouement to what has been a nicely done lead in.

Okay... so the atmosphere on this movie is cracking. It takes its time, adds a few cheap but effective jump scares of the kind you normally get in movies such as these and, altogether, it’s a pretty good effort. I’ve read some comments online that the acting is not up to scratch but it seemed pretty good and naturalistic to me. Frankly, if you are doing a movie within the ‘found footage’ genre then you really need good actors who can carry this sort of deadpan, reactive form of acting off and the cast have it here in spades. My one big bone of contention is the ending, however.

Yeah, the ending is a problem here, not just because it’s pretty obvious all the way through that it’s leading up to the destruction of the world via nuclear missiles... it’s also because of the implications of that ending on the actual format of the movie itself. All the way through the film has been brought to us from various POV camerawork held by various of the characters or documented sources such as surveillance cameras... and it’s all been nicely edited together (let’s not involve ourselves with the fact that you wouldn’t necessarily keep the camera going while you’re trying to run for your life, etc.). So, yeah, we are asked to suspend our disbelief and involve ourselves in the illusion that this footage has been chosen from... and assembled... to give us an accurate glimpse into ‘what went on’. Also... and this is kind of bizarre... the footage has been scored, quite effectively as it happens,  by composer Leslie Rothwell. So, hang on, a presumably fictional character is supposed to have sifted through multi-sourced footage, edited it together, added a creepy score... even though the world has just ended and the footage would most likely have been destroyed in the bomb blasts anyway. And, furthermore, who would be the proposed audience for such an assembly... everyone just died.

So yeah, the ridiculous follow through on the ending is a huge problem with The Unfolding and it kind of lets things down quite a bit. That being said, getting to that end point is pretty good and, though it's not nearly as polished as most found footage horror movies I’ve seen (if such a term isn’t a direct contradiction to the nature of the medium), it’s probably worth giving this one a look if you’re a fan of this particular strand of horror. The tension created by the juxtaposition of a series of supernatural happenings and a cataclysmic, military solution to the world’s events made me think a little of the Professor Quatermass adventures or an old episode of Sapphire And Steel, to be honest. Nowhere near the best of these kinds of movies but definitely not the worst (I promise) so it does have some stuff going for it and, with a £4.85 price tag on Amazon, it might be worth buying in for one of those cosy evenings at home towards the end of the year, as the winter draws in a little colder.
Posted by NUTS4R2 at 19:05