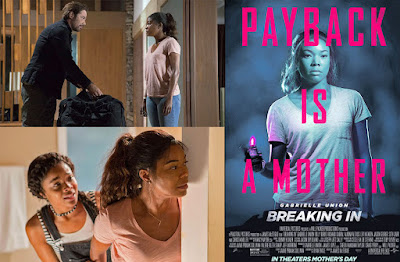 Well this is a shame. Breaking In had a lot of potential to be another great entry into the ‘fired up woman gets feral and tears through the bad guys’ style of thriller but, alas, it fails to live up to that promise for a number of reasons... despite some nice performances from all the key members of the cast.

The story set up is very simple.

After the death of her father, Shaun Russell, played with a lot of style and screen presence by Gabrielle Union, has to return to her ‘once family home’ for the weekend with her two children to settle up some ‘random Hollywood estate agent business’. Except, her father was some kind of criminal mastermind and the house, built like a fortress in terms of security, is on several acres of land. However, what she doesn’t bank on is a gang of four, fairly ruthless criminals who have broken in to try and find the safe which they know contains four million dollars of her fathers money. After some initial violence which leads Shaun outside, the thugs in question take control of the house, along with her kids and it then becomes about her breaking into the house to try and rescue her sprogs before the criminals can kill them and gain access to the loot.

And you’d think that was an okay set up for an entertaining action thriller and, well alright, it is. However, this thing has a fair few problems and I guess I’ll highlight those now.

Okay, so the first thing is... everyone in the script seems to be a walking cliché. Just take the criminals, for instance... we have the guy just doing his job, we have the psychotic one who wants to kills everybody, we have the obvious weak link who wants to just get out without anyone getting hurt and lastly, we have the leader of the pack, who is quite sophisticated and trying to hold everything together so the job can go as smoothly as possible. This last character is called Eddie and he’s played extremely well by Billy Burke. It’s a huge shame he and Gabrielle Union didn’t have a better script to work with here because they both do some good stuff in this and you feel like they just needed a much better role to shine in rather than what they both get landed with in this thing.

The other big problem is that the writers and director telegraph everything so obviously... again, sometimes to the point of cliché. For instance, we have the character who we know from a telephone call is going to be visiting the house later on the evening (two characters who do that, in fact). We have bits of glass that get broken with the director making sure we know there’s lots of glass there which can be used as a makeshift weapon or, you know, a cell phone will be left in an awkward position where you know somebody is going to try and retrieve it before long. There’s a lot of this kind of stuff going on and it just seems like the director is deliberately pushing all the buttons in turn to make the expected conclusion to a scene work with no regard for the intelligence of the audience... which is a great shame. I mean... there’s even a 1970s style, percussive heartbeat used in at least one scene while the film-makers attempt to ratchet up the tension. Seriously?

Oh, and for the record, I know James Bond did it in Thunderball (reviewed here) but I’m not sure hiding behind a dead body is going to shield you from the guns of your enemies. Also, if you’re going to cut someone’s throat, I suspect it’s going to be much more bloodier than a few drops of blood spilled onto your sleeve seen after the fact... and absolutely nowhere else. I don’t think that’s going to cut it these days... especially when you have a 15 rated film which doesn’t seem to have much more ‘adult content’ than you would expect to see in a 12. This is all very strange.

I guess what I’m trying to say there is that, after a very strong opening scene which actually did make me jump,  this is not really treating the material in an edgy or gutsy way for a modern audience. It might have gone down really well in the 1950s but... yeah, not now. The new French movie Revenge (reviewed here), for instance, has a much more potent ‘wild woman on the loose’ dynamic to it than this thing. This one just seems to be a little bit of a sanitised let down, to be honest.

So there you go... all in all, Breaking In is not going to be winning any awards and I felt sorry for the main leads since they were doing some really nice stuff in this. This is a fairly short review and for that I apologise. There has got to be a good movie dealing with breaking into your own place and protecting the children out there but, unfortunately, this is not it. I won’t be seeing this one again.
Posted by NUTS4R2 at 19:19