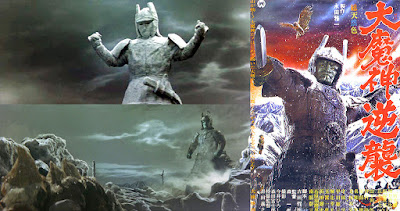 Well, here we have the third and final entry in the series of Daimajin movies which were released three months apart in Japan in 1966, with this final one at cinemas in December of that year. However, as far as the titles go on the US releases... it’s a mess. This one never got released in the cinema in the US but the English title was originally called Wrath Of Daimajin (and is listed as such on the IMDB) but that was the Japanese translation of the second film. The Japanese translation of the third film was Return of Daimajin... except that title is what the US market called the second film so... I’m going to go with Mill Creek’s release title for this one, Daimajin Strikes Again.

The opening title card is a thing of beauty with loads of birds being released behind the cool Japanese font followed by sparkly, glittery things which I am assuming is supposed to be gunpowder... I’ll get to why a little later. However, the sequence immediately following the title card makes absolutely no sense with the rest of the movie and I can only assume it was included by the film’s producers because they felt there wasn’t enough of Daimajin in the movie (something which I would argue is the case for all three films, actually).

In this opening, Daimajin in already up and about from the start and we see bits of him such as his arm or maybe a leg (no full body shots or face until the last little bit of the film) as he wanders around causing avalanches, floods and various other ‘natural disasters’ such as earthquakes and we see various people huddling in terror and proclaiming that “God must be furious!” as their dwellings are wrecked and they are made homeless. This is followed by a voice over narrative moment saying that these stories take place in a time when people thought their mountain Gods caused such natural disasters. This is curious for three reasons... 1. We have just seen that Daimajin, their mountain God, did indeed cause these disasters... 2. This behaviour is completely at odds with the avenging spirit we know him to be from the previous two movies (and this one, as it turns out) and... 3. This sequence and its consequences play absolutely no part in the subsequent film. It’s a complete non-sequitur and this makes me assume it was placed here to start the film off with a bit of spectacle since, in all honesty, there’s not much action in this movie, which seems to be aimed squarely at a young, family audience (which makes the final, bloody denouement all the more curious, to be honest).

So then we get into the main story, such as it is, with a dying man returning to his village from the mountains. He tells a story of all the men folk being attacked and abducted by a bunch of evil samurais to be used as slave labour in Hell Valley. The remaining villagers want to go and rescue their people but the only way through to Hell Valley is across the God’s home, Majin Mountain and, if it snows, then anyone stuck up there is not expected to survive.

Meanwhile, while the adults are procrastinating, a trio of young children leave the village and decide to go up Majin Mountain to Hell Valley and rescue their fathers from the evil samurai. Now, the fathers in Hell Valley seem to be involved in carrying dry sulphur from the region and are said to be aiding their captors to build ‘a construction’ which will help them invade and conquer any surrounding villages. However, it’s really not very clear at all, throughout the entire movie, just what the heck it is they are supposed to be constructing but, since there are lots of explosions when things get knocked over in the final sequence of this movie, I can only assume it’s something to do with gunpowder manufacture but... it’s not made clear in the movie to be honest. At least not in the subtitling.

Much of the rest of the movie is taken up with some great shots of the trio of kids climbing up and around the mountain and some gorgeous compositions and atmospheres are created with the three kids in the foregrounds pitched against the angles made by the natural landscape behind them. It reminded me a little of the astronaut walk seen the year after in the original Planet Of The Apes, in some parts. After a while, a fourth kid who wanted to come also joins them and we get more of the same. At one point, where the kids have to sneak past an old lady who says they can’t go up the mountain, we are reminded that folk in this film think that Daimajin is a “scary, wild mountain God”. When the kids come to the giant stone God, the atmosphere gets dark and windy for a little while and we are then told that Daimajin’s ‘avatar’ is a hawk, with which he listens in and watches the progress of the kids throughout the movie.

Then we get three of the evil samurai who go onto the mountain to try and find the villager who escaped at the start of the movie and they then start to go after the kids... who seem to outsmart them at every turn. For a while there, it all gets a bit ‘Home Alone on a mountain’ to be honest. However, things get hairy for the kids after one of them hurts his leg and so they construct a raft (somehow) and try and float it down to Hell Valley... but of course it cracks up on rocks and, with all the finality that Japanese movies of the time seemed to never lack, the kid with the dodgy leg dies and floats off down the river.

Then one of the kids has a dream about being lost in the snow with Daimajin’s hawk avatar tracking him. Sure enough, it starts snowing on their second night on the mountain and they get into all kinds of trouble. Then the three samurai find them and are about to shoot them all when the hawk avatar kills the three samurai by clawing up their faces but... not before the hawk is shot. After it dies, one of the kids buries its bleeding body, says a prayer to Daimajin and jumps into the thick, snowy ice as a self sacrifice to the mountain God’s spirit. At this point, the titular giant statue starts bleeding down its visage and then does that thing with its hands in front of its face as a travelling matt, which it always does to reveal its usual, “angry as f*ck, I’m so pi**ed off I’m going to kill all the villains in ways so not fit for the general family audience movie this is supposed to be” face.

And then we’re in the final 10 - 15 minutes of the movie as Daimajin goes on his angry rampage, first turning golden and rescuing the kid who just sacrificed himself, not to mention resurrecting his hawk, before stomping around in the evil samurai’s valley and killing all the villains as they are about to throw the peaceful villagers into a lake of sulphur. And it gets pretty violent. Explosions of sparkly bits light up as he knocks over buildings (for some reason so... gunpowder, I guess?) and he steps on one guy so hard that blood comes out of his mouth. He then takes the main villain in his hand, grabs his giant stone sword and runs the guy through with it against a rock... before pulling the sword out so the victim can fall into his own sulphur lake. And that’s pretty much where the movie ends, as the grateful villagers prey to him and he returns to his stony face form before a nice effect has him dissipating in the wind as snow. It’s a nice end to a pretty enjoyable trilogy and, like the previous two (each by a different director), I thoroughly enjoyed this one. Just a shame no more Daimajin movies were made after this although I believe a TV show was released in 2010. Who knows, maybe we’ll get to see a subtitled release of that over here someday. In the meantime, Mill Creeks stunning US zoned Blu Ray of the trilogy is the absolutely best way to go if you want to catch these great movies. Highly recommended.