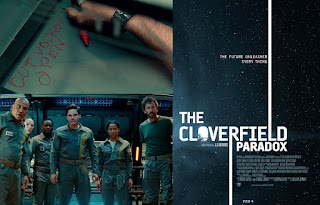 Warning: Yeah... this one’s going to go right into
spoiler territory very quickly. You have been warned.

Okay, so... originally entitled God Particle, The Cloverfield Paradox is another ‘Clovered up’ movie which fits around the previous two Cloverfield pieces to give us a tale which actually, in some ways, goes a good deal of the way to explaining the cause of the events in them... and probably any others that come after it too. Although, with the information gleaned from this one, there probably doesn't need to be any further movies made in the cycle, to be honest as, well... this one seems to wrap it all up.

The film stars Gugu Mbatha-Raw (so brilliant in Miss Sloane, reviewed here) as Hamilton, a physicist who specialises in all that large Hadron Collider stuff you hear about from CERN. The film starts off in the not too far future with her making the decision to leave her husband on Earth, for what they hope will only be 6 months, in order to conduct experiments in smashing particles together on a space station orbiting the planet, where that is perceived as being less dangerous for everyone else. This is hastily undertaken with the object of creating a new energy source as various countries are in ‘oil wars’ with each other to take ownership of this rapidly diminishing resource.

So, yeah, from there we jump via the opening credits, ushering in Bear McCreary’s cool new score and with a similar typographic design to 10 Cloverfield Lane, to two years later when Hamilton and her fellow astronauts, played by a cast which includes such luminaries as Daniel Brühl, Chris O'Dowd and Ziyi Zhang, are still up in space trying to end the world’s escalating problems. And then, of course, everyone's worst nightmare is realised when the thing that they've has been trying to get right for the previous couple of years actually works. Particles collide and the Cloverfield space station is victim to what a pop culture scientist scaremonger on Earth has been referring to as The Cloverfield Paradox... not that there actually seems to be much of a paradox in this move but, you know, you can’t have everything.

From here on out the film starts getting both interesting and plain B-movie cream crackers, depending on whether you find yourself buying into the suspense of the situation or laughing uncontrollably at some of the 'bug nuts craziness' on show here. Or possibly, you know, a mixture of the two... which is how I reacted.

Okay so, for example, a scene where a hitherto unknown character just materialises inside the walls and wiring of the space station and has to be cut free of the all the various wires and pipes that are penetrating her body is pretty cool. Especially when we find out that she knows the crew but they don’t know her.

On the other hand, a wall metamorphosing itself and trying to pull Chris O’Dowd into it and then slicing off his arm perfectly, with absolutely no pain, no blood and no need for cauterising... that was pretty unique and just the silly side of funny, I have to confess. Especially when the crew later capture the arm wandering around on its own, put it in a box, realise it’s trying to communicate with them and then throw it a pen so it can write them a note. Yes, this happens, I’m not making it up... you aren’t in a 1930s Hollywood B-movie here... this is bang up-to-date movie making on display, not The Beast With Five Fingers, apparently. What’s even better is that it writes that they should cut open one of their fellow crew members. That’s okay because, when all the worms from the lab went missing, they took over the body of one of the team somehow and then exploded out from him in a little homage, in some ways, to the original ALIEN movie. So... hmm, yeah. Luckily for them, their essential missing giro which helped run their particle collider happens to have somehow materialised inside this guy’s body too... so, good for them.

Yeah, okay the film is quite ludicrous and you will probably point and ridicule it at some point in your viewing experience but it’s never boring and it did keep me guessing/entertained for a while. There are a fair few problems with it though...

One of these is with the fact that none of these shenanigans where the crew are getting attacked by their own ship in various ways make a lick of sense, even when you throw the Large Hadron Collider into the equation. How did Chris O’ Dowd’s arm know what to write, for instance. This is probably my biggest obstacle within the film, to be honest.

The other big problem is that this is set in the Earth’s future, whereas it’s implied that the previous movies weren’t in that time shift at all. That being said, though, it is kinda implied that the particle experimentation also effects time as well as various multiversal dimensions and so it’s conceivable (and highly probable, I suspect) that this event set up a similar set of various parallel worlds, one of which is our Earth as it was in the past, allowing ‘things’ that go slither in the night to touch down on our increasingly unstable planet... one of which is presumably our world as it was in the time of the first two movies.

So yeah, in those terms at least, the film finally answers the questions, albeit in no real detail (but who needs that?) as to where the monsters from Cloverfield (reviewed here) and 10 Cloverfield Lane (reviewed here) came from (or rather, how they came to be here in the first place). Which is good enough from me.

Amid all this cheesiness, though, we have some genuinely nice performances, some interesting shot set ups, nicely choreographed sequences and it’s all held together quite well by McCreary’s intense and never knowingly winking score, adding a much needed sense of gravitas (and indeed, gravity) to the film to stop it becoming too comedic when the script really is not doing itself any favours. Probably the least effective of the Cloverfield series of movies but certainly not without relevance and definitely something which, mostly, doesn’t let the side down. Probably only watch this one if you’ve seen the previous two, though. Or you might not want to watch the others.
Posted by NUTS4R2 at 19:05