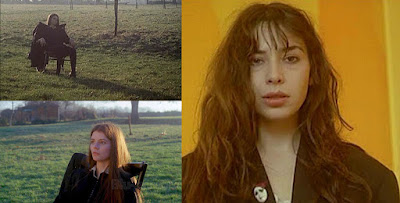 Okay... so I seem to be getting really unlucky when it comes to this review site and the films of Jean Rollin. Believe it or not, I am very much an admirer/supporter of this director and love the surreal beauty of his images coupled with the female nudity, twins/duos and vampirism which are some of his trademark themes when he was shooting his low budget personal projects (and not making porn for a fast buck). I own maybe 12 - 15 of his movies (in various editions including the latest uncut, US Region A Blu Rays and those gorgeous DVD Encore boxed editions from a number of years ago) and, I promise you, I love the majority of these.

Why is it then, whenever I come to acquire a Rollin film I’ve not seen before for the purposes of reviewing it here, that I always seem to find the not very good ones? Don’t worry, I’ve got some classics freshly upgraded to Blu Ray to rewatch and write up over the next year or two but, as it happens, this is another of the ‘not quite there’ Rollin films for me... although I’m sure lots of other people must like this one.

The Escapees starts off in an old, mansion type house (it could maybe have been a private boarding school in real life... it has that look) we are asked to believe that this is an insane asylum. The bizarre and not very realistic looking padding added to the walls like soft wallpaper tries to uphold that illusion but really isn’t all that convincing. As the credits roll we see two girls looking out of one of the windows before being ushered off by one of the staff. We then cut to a shot of a beautiful girl in a lone rocking chair in the field outside the house. After a shot looking at a window focusing on a conversation between the lead psychiatrist and one of the assistants, we see a reverse shot a little closer in and looking out, again, at the rocking chair girl. The rocking chair girl is called Marie, as played by Christiane Coppé and she is framed perfectly in one of the six panels of the window as the camera looks out at her. Which is the kind of perfect composition one half watches Rollin for anyway, to be fair.

We then meet the other of the two main protagonists of the film, Michelle, as played by Laurence Dubas. We first see her being hosed down by attendants before being straightjacketed and locked in her room with the aforementioned ‘padded walls’. Even though she is straightjacketed, it seems no problem for her to just nudge the window open because, not only is it unlocked, it’s already partially ajar. What the heck? There’s good security for you. She tries to attract the attention of rocking chair girl to help her escape but Marie is in her own headspace for a little while and we see Michelle from outside the window shouting out at her. She then goes off to get something in her teeth to throw out the window to get Marie’s attention. When she comes back we see she is only one floor up which, honestly, makes you wonder why she doesn’t jut make a jump for it. Also... it’s a different, much bigger window the outside shot of her is on this time... in a slightly different part of the house. The continuity on this film just leapt out of that window itself, hurtling both to oblivion and the great, anti-consistency resting ground in the sky.

After a little while the two hook up (and for some reason, Marie has absolutely no trouble just pushing open Michelle’s ‘locked’ door... what is going on here?) and escape together where they have interesting encounters - first meeting a lady playing a bongo drum in the forest for no apparent reason and then joining her ‘performance’ troupe before deserting on them with their new found friend, Sophie the pickpocket, played by Marianne Valiot.

There are quite a lot of familiar, Rollin haunts in the movie (and also quite a lot of handheld camera used to capture them in this one, for some reason) such as a junkyard, a disused train yard, a beach (possibly the same one he uses in most of his films but, if it is, it’s not the same stretch used here... or it’s taken from a completely different angle) and, later on, a dock. One place where I’ve not seen Rollin shoot before is at an ice rink. After getting in trouble and lashing out with a bottle, Marie runs off to hide in said ice rink for the night while Michelle is out looking for her. Of course, seeing as it’s a Rollin film and it quite naturally defies logic as part of its overall DNA, Marie ‘borrows’ a handy nearby costume and starts skating and dancing on the ice rink. However, even though the rink is completely abandoned at night, a spotlight still follows her around so we can see her ice dancing skills (which brought memories of when I used to have to dance on ice for people when I was 6 or 7 years old... not sure that’s a good memory though). Perhaps the spotlight is just supposed to be in her mind like the cheers of her imaginary audience... who can tell? Apparently, the actress’ ice skating talents here was one of the reasons Rolllin picked her for this role.

When Michelle finally catches up with Marie the two stay with Sophie in a sailor bar near the dock. Sophie’s plan is for them to all stowaway on a ship with her sailor-boy lover but things don’t go smoothly for any of our main characters (they never do in a Rollin film) and death or desperation await all three of these friends in some form or another.

The film is not, as I said, at the upper end of my Jean Rollin experiences and, although production values have never been his strong point, probably because of the small budgets with which he works, he usually makes up for that with some incredibly beautiful, often erotic, often surreal imagery which make the films much more interesting propositions than those of a lot of directors, especially those who work within the same kind of genres. However, I found this one to be really distracting. I’m perfectly used to incredibly bad acting in some (although, actually, not all of his films) but there didn’t even seem to be a budget for retakes here. There are some scenes when it looks like one or another of the characters have been waiting for their cue and another one might repeat or stress a word to remind them it’s their turn to jump in, it seemed to me. Also, although the lack of story follow through is almost a necessity in this director’s work, the film did look like it was being reshaped in the editing room from whatever material the director managed to get. Certain reactions from characters to things they were already supposed to know, for example, made the film seem like it had been put together in a different order than originally intended.

Famous porn star and Jean Rollin regular Brigitte LaHaie, who I have a lot of time for as an actress, turns up towards the end in some sequences which spell doom for certain people and it’s almost like a sigh of relief when she appears and makes at least one of the characters seem a little more credible. Taking her clothes off and making love to another woman also helped, of course but I was just grateful to see LaHaie arriving like the 'acting cavalry' as almost a trademark of quality in a kind of ‘Rollin muse’ way at this point, although her role here is even less of one than her turn in Rollin’s Grapes Of Death (reviewed here).

And that really is all I’m going to say about The Escapees, I think. In some ways the movie seems like a partial, spiritual cousin to Rollin’s earlier The Demoniaques, with its depiction of stripey shirted sailors and the death of one of the characters in a raft floating in the dock but I didn’t find the film nearly as entertaining or as striking in its imagery as that earlier movie. If you are a die hard fan of the director and appreciate his fine eye for the juxtaposition of feminism, nudity and surrealism then The Escapees is always going to be a film you’ll want to take a look at, regardless of the end quality of the piece and, as I said earlier, I’m sure this one must have its fans. If you have never seen a Rollin film and want to get a taste for the director, I’d suggest you stay away from this one for a bit and start somewhere in the late 1960s or early 1970s with his work, which is much more poetic without seeming as pretentious and forced as certain moments in this film do. So, done with that one and I hope to bring you some much more positive reviews of this marvellous director’s work sometime soon.
Posted by NUTS4R2 at 12:18