Colour Out Of Space 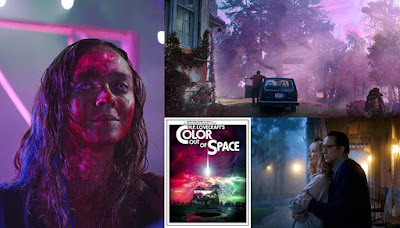 Drag Me To Well

Okay, so the sixth and final film of my London Film Festival experience this year was also a treat, in the form of a new H. P. Lovecraft adaptation. Now, I’ve always had a soft spot for Lovecraft but he’s a hard writer to get up on screen. Mostly, I suspect, because the majority of what he wrote used the short story form so it’s hard to expand out into a feature anyway. Also, Lovecraft’s preoccupation of describing ancient, ‘nameless’ horrors or alluding to the unspeakable things which happen rather than actually giving you full descriptions... the literary equivalent of hiding your monsters in the shadows so nobody can see how bad your creature costume is... doesn’t help potential film-makers when it comes to trying to adapt his stuff. I do, however, tend to enjoy a certain amount of what passes for ‘screen Lovecraft’. I could happily rewatch Die, Monster, Die, a 1965 attempt at bringing The Colour Out Of Space to the screen and I was even tolerant when they insisted on presenting one of his key stories, The Case Of Charles Dexter Ward, as Edgar Allan Poe’s The Haunted Palace... I still don’t know how they got away with that one, though.

So, yeah, I was chomping at the bit to see this new movie but not, necessarily, because it was based on Lovecraft (although that was always going to be one of the plus points) but because this was the triumphant return... and having seen the film I can certainly confirm it is ‘full on triumphant’... of much loved director Richard Stanley. I loved his movies ‘back in the day’ when he directed Hardware and Dust Devil but, it appears that this is the first feature film he’s attempted to make since, by my reckoning, 1992. I’ve seen a few shorts and documentaries by him since then but he’s been hiding in the shadows for a while now due to various reasons, some of them personal, and now somebody has let him have another proper crack at making a low budget feature and... well, good idea. I just wanted to see it regardless because I know how special his first two films are.

So I was delighted to be in attendance at one of the two screenings that Colour Out Of Space got at the London Film Festival this year and even more happy that the great man was in attendance himself, to give an intro to the movie and then get into a question and answer session with the audience afterwards. He’s got one of those hypnotic voices I always find so easy to listen to for long periods of time which, in a way, is just as well because he is a bit of a talker.

So anyway, based on a work by Lovecraft, a writer who Stanley said in the Q & A that his mother got him into at the age of seven, Colour Out Of Space stars Nicholas Cage as Nathan, the head of a secluded homestead in New Orleans where he keeps a farm of tomatoes and alpacas and lives with his wife Thereza, played by Joely Richardson and his three children Benny (played by Brendan Meyer), young Jack (played by Julian Hilliard) and Lavinia (played by Madeleine Arthur).

The film is re-set in modern times but as the film’s ‘outsider’ character, a water surveyor played by Elliot Knight, walks into the forest and finds Lavinia, she is dressed in antiquated looking clothes and standing by her horse as she is trying to ‘summon up a spell’. It’s a lovely opening actually because, it’s not until Knight walks in on her and you can see him wearing modern clothes, that you are able to get a better time fix on the thing. It’s almost like you are looking at something which Roger Corman might have made in the mid-1960s for a minute. Knight’s character is called Ward Phillips which is, of course, a shortening of the original writer’s first two initials, Howard Philips.

Actually, the film is absolutely cluttered with allusions to the life and literature of Howard Phillips Lovecraft, with references to Dunwich and Arkham and all kinds of things. It didn’t bother me too much though because this production is so well put together. I was a little disappointed, truth be told, that the Necronomicon, the fictitious, extremely rare and demonic tome mentioned in many a Lovecraft tale... and quite a few other tales in both literature and film over the years... was reduced to being a small paperback volume in this. I got over it fairly quickly though. There are also a fair few references, I think, to the previous films of Richard Stanley ‘hidden in plain sight’ on occasion, such as the graffiti scrawled on the eldest son’s bedroom wall stating that... “No Flesh Shall Be Spared”... which is, of course, a reference to Hardware.

The film is... and this really isn’t surprising given as it’s Lovecraft... not entirely faithful to the original Lovecraft short. This is a movie and demands changes to be able to pass into this format, especially in a world where every film pretty much has to strive to be commercially popular now. However, unlike a fair few adaptations of the writer’s works, it is actually quite faithful in its own ways to the spirit and basic plot points of the thing. So yes, there are alpacas and crazy, almost Gigeresque... perhaps I should say Cthulhuesque in this case... monsters but various key points are put in place and faithfully maintained to anchor the film firmly in the source material quite overtly and positively so. In terms of modern adaptation, it holds up quite well. I was surprised when I heard the astonishingly low budget for this film too (around 6 million dollars) since it looks way more expensive, I think, than what it was actually put together for.

Beautiful shot set ups, of course, as you would expect form Stanley and the colours are, absolutely wonderful. There’s some nice purples in there. It probably doesn’t help matters for potential directors that, if memory recalls (it’s been at least ten years since I read this and probably twenty more before that even), the ‘colour’ out of space is an alien colour which has no equivalent on Earth so, given the challenge of an impossible colour palette to work around, I think the director here does pretty amazingly well.

I’m not going to say much about the story beats on this one... the meteor, the well etc... because you know, pretty much (and Mr. Stanley said this himself in his Q&A session, after pointing out the difficulties of adapting Lovecraft for the screen) that as far as human characters go it’s almost always going to end in either madness or death (usually both). There is, in fact, a last person standing moment in the film but I think this is very much in keeping with the original short and the nice ‘absence of colour’ in certain parts of the end sequence was also nicely done and enough to distract me on a visual level anyway.

If I had any criticisms of the film then I think, purely going on this first viewing, that things maybe do get a bit over the top towards the end... not in terms of content but in what they ‘show’ of the content. Of course, you expect that of a Nicolas Cage film now anyway but I was amused to hear Mr. Stanley saying, after the film had finished, that Cage “isn’t nearly as crazy as people think he is”. I always suspected as much but, of course, coming from a director as delightfully crazy as Richard Stanley anyway, I’m not 100% sure that’s a stirling endorsement.

Another slight criticism would be the title, which on the print I saw (even though I saw it in rainy England), was written as Color Out Of Space, in the American spelling. However, I did notice that the spelling was written in the English manner on the credit which read something along the lines of... based on the short story The Colour Out Of Space by H. P. Lovecraft... so that kind of mollified me a little. As did the appearance of Tommy Chong in the movie.

Oh... I almost forgot to mention the score by Colin Stetson, which I thought was pretty good. It does call attention to itself in various scenes but I don’t see anything wrong with that and it does well to help maintain a level of unease and strangeness to the proceedings. It’s a nice scene setter too, with the breathtaking opening shots of the surrounding forest before the meteor crashes down made somehow eerie by Stetson’s, almost ‘new age’ moments within the score. I’d grab this one quickly if only the thing was out on a nice CD.

And that’s me pretty much done with Colour Out Of Space and I can’t wait until this thing comes out on Blu Ray (hopefully sooner rather than later). It was a thrill to see a film I’d been really looking forward to more than most others this year and a very special cherry on top of the icing to actually get to see Richard Stanley ‘in the flesh’, as it were.

And that’s also me done with the London Film Festival this year. I’ve seen some truly remarkable films this time around and I had a great time with all of them. Looking forward, now, to the next festival I have tickets for... which is the mini FrightFest Halloween all dayer event at the start of November. Hopefully my ‘film stamina’ will prove its worth as I try and survive from 10am in the morning until 12.30am the next morning, devouring various new horror movies as they flash before my eyes. In the meantime, I hope you enjoyed my coverage of the films I saw at this year’s London Film Festival and normal review service of three a week should resume very shortly, with two new cinema releases up next, fingers crossed. Thanks for reading.
Posted by NUTS4R2 at 11:24