The Coming Of Sin 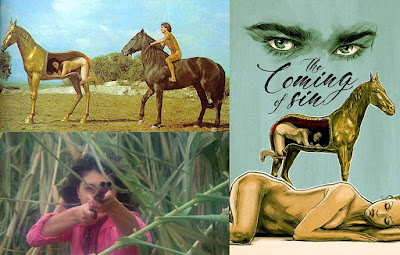 May The Horse Be With You

The Coming Of Sin... also known as The Violation Of The Bitch, Sodomia, Vice Makes A Visit and a whole host of alternate titles depending in which countries it had some kind of cinematic or home release in various different versions (usually very cut in different ways depending on the whims of different censorship boards) is the third and final film in Arrow’s excellent, recent Blood Hunger - The Films Of José Larraz box set. It’s a movie I’ve seen stills and snippets from in various documentary shows over the years and, without remembering the title or director, it’s always eluded me. So it came as a bit of a surprise when Arrow announced it in a shiny new, totally uncut Blu Ray restoration for sale in the UK.

So I finally get to see it and... yeah, interesting film.

Briefly put, the film is set in Spain on the estate of a rich, single, English artist called Lorna, played by Patricia Granada. She is asked to ‘take in’ a new helper, a young gypsy girl called Triana, played by Lidia Zuazo, as her previous owners are returning to England for a bit. She agrees and from that moment, an erotic undercurrent takes hold of the film as Triana and Lorna develop a sapphic bond but Triana also suffers from horse infested dreams, possibly brought on by a man who wants her sexually. This includes the famous image of her naked in a cutaway of the back half of a horse which said horseman rides around in preparation for the horse to mount the sculpture and penetrate the woman inside.  And did I mention that this guy, called Chico and played by Rafael Machado, likes to ride everywhere around the vicinity of Lorna’s dwelling, naked on his horse? And I must say, he is kind of imposing in his terrifying reign of naked horsemanship, as he gallantly gallops nakedly about the Spanish landscape nuding everybody up!

Triana seems at first terrified of Chico, due to a prophecy from a gypsy palm reader and that seems totally justified when Chico tries to rape her in the forest. He gets brained with a rock for his trouble but the horse is fine. After this, Chico also becomes an object of fascination for Lorna and, although Triana is still very rude to him, he forms the last part of a ménage à trois between the three protagonists/antagonists and it’s a very Larraz kind of movie, it has to be said. At least, it seems to me, his concerns in this of a tension filled sexual relationship triangle is certainly something which similarly infuses the other films in this boxed set,  Whirlpool (reviewed here) and Vampires (reviewed here).

And it’s not hard to watch because, as somewhat sleazy as the subject matter is, Larraz manages to make it look absolutely beautiful, in his own unique way. Even from the opening which starts off with a series of shots of the estate which takes us in to show Lorna painting, the camera lingering on various paintings in her estate, we know we are in the hands of a filmmaker with a specific vision. It’s an almost claustrophobic series of establishing shots and visual introductions to the character in a film where Larraz really uses the shapes and textures filling the frame to create visual areas specifically for the people in shot. Such as a brilliant scene where Lorna strips off to rub lotion on her body before masturbating. Her back is to the left of camera but the rest of the shot is split into three vertical planes with the central plane being a full length mirror which shows us the front top of her body. There’s some nice stuff going on in this film visually and it’s one of the reasons why I quite like what I’ve seen of this director so far.

I also like the way Larraz uses silent visual metaphor to make a commentary on the internal, psychological state of the characters and the situations they find themselves in. Such as lingering on the expression of a person in a painting or, in an extended flamenco dance sequence, whittled down considerably in some versions of the film, where he uses it as a nod to the growing sexual desire between the two women. I loved the ending too... which also seems to be typical of the kind of darker story beats Larraz likes to explore cinematically. It almost made me forgive the horrible Spanish guitar music which serves as a soundtrack for the film a lot of the time... that’s really not a ‘sound’ I particularly enjoy.

Now, when the film started, I noticed a certain graininess about it and, it has to be said, this never really lets up during the course of the movie. However, after having watched one of the extras in which one of the people who worked on this does a comparison between this and pretty much every other home video version that’s been released before it... well, I really can’t complain. This is pretty much the best the movie has ever looked and, I suspect, is likely to look. So if you want to see this one, definitely get this Arrow edition.

And talking of extras, Arrow have done themselves proud again and, among the gems found on this release, there’s an interview with one of Larraz friends and sometimes co-worker Simon Birrell which is an absolutely fascinating insight into both the man and the world in which he inhabited in later life. Also, there’s a really wonderful short film written and directed by Birrell called His Last Request (aka El último deseo) included, which Larraz helped out on a little and, it has to be said, it’s well worth a watch. It’s a black and white silent movie with a fetishistic undercurrent and a wonderfully satisfying ending starring the great Jack Taylor, who genre fans may remember from some classic horror and exploitation films such as Dr. Jekyll VS The Werewolf, Female Vampire and The Ghost Galleon (the third of the Blind Dead movies).

And that’s about all I have to say on The Coming Of Sin. It’s another absolutely hypnotic and dream-like Larraz movie which I won’t forget about in a hurry and I would urge anybody interested in these kinds of movies (I understand they’re not for everyone) to invest in a copy of this wonderful Blu Ray set from Arrow while it’s still available. This one was absolutely money well spent.
Posted by NUTS4R2 at 19:27