Legend Of The Witches/Secret Rites 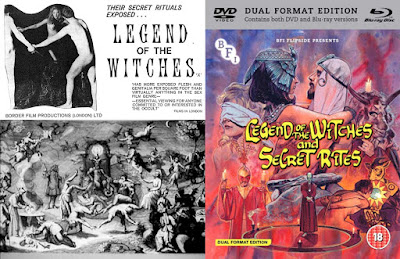 Legend Of The Witches
UK 1970
Directed by Malcolm Leigh

I wanted to take a look at this new release from BFI Flipside before the end of the Halloween season this year because the subject matter, 'lifting the lid' on witches and pagan rites seemed to be somewhat aligned to what has become, over just the last decade or so, a more celebratory date in the UK calendar (for better or worse). Both the main features on these discs are claiming to be documentaries, showing what the real modern day practice of witchcraft was like at the time and, indeed, both documentaries centre around the personality of Alex Sanders, who was publicly known as the King Of The Witches, along with his wife Maxine, also a practicing witch.

In truth... and this is much more blatant in Secret Rites, the films are more or less excuses to show naked men and women dancing around in covens and using the quite legitimate (depending on your personal beliefs) rituals involved with modern witchcraft to allow a film full of eye candy with a serious tone the chance to be lucrative at the box office. The fact that both these ‘mockumentaries’ sometimes played on double bills with other more overtly, sexually titled productions is perhaps a testament to how they were seen at the time, although I’m sure that Mr. Sanders was probably quite genuine in what he wanted to get across to the paying audience, albeit cloaked... or should that be uncloaked... in a thin, exploitative veil.

Of the two, the first film on these discs, Legend Of The Witches is, for me at least, the most interesting, featuring sharply contrasted, crisp, black and white photography. It’s a bit of a slow burner and takes its time to get going with lots of static shots of landscapes and nature filling the 4:3 screen. The music is nice and low key but I don’t think you’d get away with opening sequences as slowly paced as these today... at least not shot and presented like this. It does start to feel a bit interminably dull fairly quickly but soon moves onto witchcraft initiation rites and naked bodies... curvy young women and men with their cocks impressively, given the amount of female flesh on display, hanging at half mast.

Various historical and modern witchcraft practices are recounted and demonstrated but, it has to be said, the documentary tends to wander around and lose focus between some of the set pieces quite a bit. A witchcraft museum in Cornwall is certainly ‘on point’ but we also have a team of investigators staying the night in a haunted house, demonstrations of things like Zenner cards and also sequences depicting trance states which can be manifested in subjects with the likes of a fast rotating spiral or the use of a stroboscope. It does tend to wander off topic quite a bit but does, a some points at least, try and tie up some of its more thematically challenged sections with contemporaneous practices of witchcraft.

Secret Rites, on the other hand, appears far more overt in its exploitative nature. Shot in full colour, it starts off with an echoey and deliberately sinister voice over narration as we see a witch orgy where a lady is stripped naked in a non-consensual, kidnapping kind of way and sexually groped by a coven, before upright Van Helsing-like hero ‘John Goodfellow’, warding off the witches with a cross (as though they were somehow vampires), comes to save the day. The narrative then flips all that you’ve just been shown and says something along the lines of... “that’s the popular conception of witches and it’s absolute rubbish... let’s show you how it really is.” We then catch up with Alex Sanders and his wife again (the High Priestess - “the personification of the matriarchal nature of the Wicca”) as they agree to initiate two ‘would be’ witches into their coven... except, if anything, the rest of the ‘documentary’ is at least ‘as’ exploitative as the opening section they are trying to repudiate. So.... less modernistic interruptions and just a few, elongated rituals shot, it seems, on actual sets rather than where things actually ‘go down’, so to speak... the whole thing looks like it was all exported from a Roger Corman AIP movie, to be honest. So the idea that this is presenting factual stuff rather than something which has been half created for the camera, is a bit comical. The film ends with the ‘secret rite’ of the title which is, pretty much, more of the same thing but everyone gets to wear some Egyptian costumes to augment their nakedness.

This new set also has a large selection of extras and, I have to say, even if you’re not a fan of the main content of these discs or the extras, hats off to the BFI for putting these out here in a nice edition because, frankly, this stuff isn’t going to be seen unless it has a platform like this to get bundled together with.

First up is a 1924 silent short film called The Witch’s Fiddle, put together by The Cambridge Cinema Club. It’s got a certain charm but it’s not too riveting, it has to be said. Then there’s a brief episode of a documentary style television show from the 1950s called Out Of Step. This episode is, naturally, entitled Witchcraft and consists of three interviews with people such as Aleister Crowley’s best friend and... it’s kinda interesting actually. The main witch they have on here, an elderly man who could almost pass for Gabby Hayes in looks, proves to be a highly intelligent sounding individual. He comes across pretty well anyway, as he looks on the practice of witchcraft in a philosophical manner.

These two are followed by a short film called The Judgement Of Albion - The Prophesies of William Blake... which is the kind of interminable supporting feature they used to show in the 1970s on cinema bills all the time. This one includes the voices of Anthony Quayle and Donald Sinden but that did nothing to temper the relief I found when the thing was finally over. The next thing on here is a short called Getting It Straight In Notting Hill Gate... a documentary about the area in London showing the poverty and counter-culture of the area. This was, it has to be said, a step up from the William Blake short but, alas, I also couldn’t wait for this to end, either. A gallery of archival material for the two main features on the disc rounds out the release and, I have to say, although this is not an absolutely essential purchase, by any means, it is of interest and the films have a certain charm. If this is your kind of thing then this has good transfers and is loaded with extras so, if nothing else, it's certainly value for money. Legend Of The Witches/Secret Rites is one to consider then, perhaps.
Posted by NUTS4R2 at 18:56