VHS Forever - Once Upon A Time In Camden 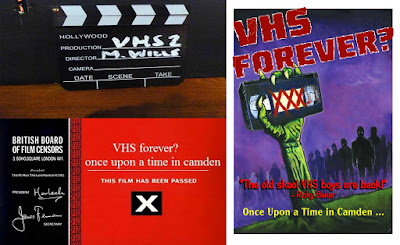 VHS Forever?
Once Upon A Time In Camden
(aka VHS Forever 2)
UK/USA 2019/20
Directed by Mark Williams
Son Of Bill Productions - Screener

Regular readers of this blog may remember my review, a few years ago, of a low budget British documentary by director Mark Williams called VHS Forever? Psychotronic People (reviewed here). Well, I was recently lucky enough to be contacted by Mark to see if I wanted to take a look at a preview cut of his new sequel to this film, VHS Forever? Once Upon A Time In Camden. So of course I said yes and I think my main takeaway from this one is probably going to be... when can I get my hands on a legitimate copy of this on DVD or Blu Ray so I can re-watch it without the time code? The answer to which is, apparently, sometime around the start of next year.

This film is pretty much more of the same in terms of the kind of content as the last movie but, for my money, I think this one is a little better than the first. Shot in the Electric Ballroom during and after, by the looks of it, a day of the Camden Film Fair (I failed to see myself walking around in the background), this one has the usual mix of people sharing their treasured memories of buying ‘hard to get’, mostly pre-certificate video tapes ‘back in the day’ (mid 1980s to early 1990s?) but it mostly concentrates on the three different incarnations of the Psychotronic Video Store in London. Two incarnations of the store were in Camden and... I think the other was in that dodgy street near Tottenham Court Road behind where the old Virgin megastore used to be. The term Psychotronic was, as many of you will probably know, filched from the old Psychotronic Guides that Michael Weldon used to put out... goodness knows where my old copy went to but it was a thick brick of a book so I don’t think I could have easily lost it.

Added into the mix of this one is also a load of guest speakers who actually are important movers and shakers in their own right and so their words and insights into... not just the original shops and their passion for horror and exploitation movies but also the people, often larger than life characters who ran the shops... is the real deal. So, yeah, you have guests like horror illustrator extraordinaire Graham Humphreys; the founder of Eastern Heroes magazine Ricky Baker; David Gregory, the co-founder of the amazing Severin Films in the US (who seems to be from Nottingham, I didn’t know that) and Jane Giles, former Scala programmer and author of the incredibly important tome Scala Cinema 1978 - 1993 (which has my name in the back of the book alongside all the other kickstarter people listed, so I should probably get around to reading this gorgeously rendered document at some point soon... watch out for a review on this blog).

It even has a few words from Paul Brown, who has been running the Camden Film Fair and its sister fair at Conway Hall for quite a while now... so it was nice to see him talking on here because I always grab stuff from him when I can and he’s definitely one of ‘the good guys’. Actually, one of the guests here makes the point that, with one of the guys who ran Psychotronic having a stall at the fair, the Camden Film Fair has almost become, in its bi-monthly ‘one day only’ shows, the modern equivalent of going to the old Psychotronic shop... although the VHS format itself is not as prevalent as the other media on offer there.

To me, this was a lot more satisfying than the first film because of the way it’s been edited together although, I recognise that the style here is somewhat different and I suspect the decision on the way it’s been spliced is going to divide people. I prefer it because the chunks with each guest are longer or, rather, perceived as longer because it doesn’t cross-cut between various talking heads... instead, it mostly stays with each person and allows their stories to come across uninterrupted (although there’s a nice moment when a lady walks in front of the camera, which is quite funny). Now, I found this to be a much better way of hearing the various stories here because it gives the recollections time to breathe and come to life naturally but, I’m guessing some people might prefer a more dynamic editing style cutting between people on various thematic points. Not this viewer though, so I was much more impressed.

There are, of course, various clips and artworks of covers, posters and fanzines edited into parts of the frame to liven up some of the sequences and these are a nice addition but not totally necessary. That being said, if you’ve never seen some of these old covers and clips before, you’ll probably get more out of this.

My favourite bits were the almost unanimous shared experiences of the majority of the people interviewed having been well ‘under age’ when they first started buying their highly dodgy, often third generation copies of various, ‘less than legitimate’ future video nasties and exploitation titles. That and the genuinely charming testimony of the guy who first started going to the shop to fuel his interest in blaxploitation movies but ended up having his mind and tastes expanded by the huge cornucopia of bizarre material available, coupled with the community spirit of the people who used to frequent the store. That was a nice section to include here.

And that’s me done on this one. If you liked the first movie, VHS Forever? Psychotronic People, then it goes without saying that you’ll also get a blast out of VHS Forever? Once Upon A Time In Camden. And even if you didn’t know the times, locale and spirit of this particular slice of the VHS phenomenon first hand, then I’d still say you might get something good out of it... dare I call it ‘valuable insight’ into a time long gone and a species of movie collector who is, perhaps, like the dinosaurs, dying out to make way for a new and slightly different, if no less avid, breed of exploitation movie connoisseur (I think it’s fair to say that, with the present DVD and Blu Ray market, cinephiles have never had it so good). As far as I’m concerned... and I won’t beat around the bush here... this is, like the first movie, an important document of a particular time and place in history which both modern collectors and casual buyers would be richer for knowing about. Even though I’ve seen it, I’m going to be one of the first in line to pick up a copy of this on a shiny disc when it comes out next year and I’d urge you to look out for it when it does get released ( I believe it’s actually getting a VHS release first). I thoroughly enjoyed this one.
Posted by NUTS4R2 at 19:01