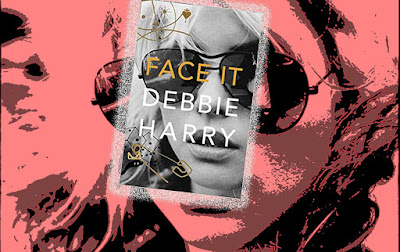 I don’t read that many autobiographies. Not for any strange reason... it’s just that there are very few people I’d be interested in knowing more about and they’re usually the ones who don’t write autobiographies. However, when I found out that Debbie Harry, lead singer of the group Blondie (among other things), had just written a tome I was well on board and it went straight onto my Christmas list.

It’s funny... I was never much into pop music when I was a kid (Is it still called pop music and does Blondie’s US punk variant aesthetic apply here to pop?). I was... and still am, I guess... someone who prefers to listen to a good movie score. So I never really ‘followed’ Blondie when they were at the absolute height of their powers in the late 1970s... but their music was a frequent backdrop on all the radio stations and television shows when I was in my teens and something must have seeped in because, after I discovered pop music had more to offer than what was at face value, sometime in the mid-1980s, Blondie was one of the first groups (after The Beatles, Kate Bush and Simon & Garfunkel) who I decided to check out. Like a gazillion other people, I bought the old vinyl LP (and a little later, the CD) called The Best Of Blondie and it was, as far as I could tell, absolutely filled to the brim with some amazingly strong and melodic songs. There literally wasn’t a bad one on there (although, I admit it took me a while to get into Atomic) and seemed to me like a collection of fairly sophisticated songs. It wasn’t long before I explored some of their other albums and my favourite one, with also the best cover art, would have to be their Autoamerican album. I used to listen to that one a lot.

So here I am, having just finished Ms. Harry’s new book Face It and, as I’d kinda expected actually, it charmed the pants off me. This is a, more or less, chronological take on her life from childhood to the present but the structure, while certainly there, is a little looser and more flexible than some other autobiographies I’ve read. Debbie will think nothing of making a quick deviation here and there, jumping backwards and forwards in time to suddenly cover something which she feels needs to be... or maybe it would be more fun being... grouped together thematically with something else.

She seems to have lead an interesting life and the book is not, I’m happy to say, just a series of behind the scenes anecdotes to various concerts and recording sessions... these are here too but they take the form of ‘easy to swallow’ asides and it’s all gleefully mixed into the potpourri of her life in a way that is both jarring and complimentary 'both' at the same time. There are also little interpenetrating sections where various pieces of ‘fan art’ is showcased with introductory commentary by her and this, apparently, is where the title of this book comes in... since they mostly all depict her face.

Some of the movies she’s made such as Videodrome and Union City get a respectable amount of ink while others are sometimes just whispered in passing as she cruises past little pockets of her life which, as she says in her last chapter, leaves the audience... or readers, I guess... wanting more. I would have certainly liked to have learned something more about the making of a wonderful film she’s in called My Life Without Me so, if she writes a second volume of this anytime soon, I’ll be first in line.

So, yeah, the book is full of amazing facts and interesting attitudes to events that have happened to her in her time. For instance, the way she seems to take a rape/assault coupled with a robbery in her stride is perhaps a little telling of how comfortable and confident she is in her skin... many people would not be able to do that as seemingly lightly as she does here. There’s also a lovely moment where she reveals that she slept with actor Harry Dean Stanton a couple of times. The first word that sprang to mind when I read that little reveal was... “Legend!” Although I’m not sure if I meant that in regard to Debbie H or Harry D. On reflection... I think it pretty much meant both of them, to be honest.

There’s also the quirky and sometimes quite informative and intelligent side to her personae given room to thrive here too. For example, one chapter starts off with her explaining what she believes the phenomenon of ‘coincidence’ is actually about. Another chapter might concentrate almost totally on the usefulness of having thumbs... opposable ones at that. And, of course, sometimes what’s left almost unsaid in the book is what lingers most in the memory but, of course, as above... leave them wanting more.

Ultimately, this was a real breeze to read and, in places, quite thought provoking too. I got the feeling that the writer herself thought she was being a little too dark in places and has tried to compensate for that but, honestly, I think it’s a much lighter, fluffier book than she realises and, of course, that also makes it a very entertaining and most welcome tome to sit and ponder. Alas, my favourite song of hers, the one I always play first when I revisit her music... Here’s Looking At You... doesn’t seem to get a mention but that’s okay, the spirit of her vocals seemed to me infused into the pages so I didn’t really miss it as the writer sprayed her initials across the pavement, so to speak.

So yeah, Face It is a great read, something I’d definitely recommend to fans of Blondie and outsiders such as myself, who don’t have any idea of what its like to live in the ‘New York scene’ of various decades and who can, at least, get a flavour of what it was like there. I really enjoyed this little peek into Debbie’s world and all I can say is, I hope she gets the time and motivation to bring out a second volume some day. I’d definitely like to know a little more.
Posted by NUTS4R2 at 18:50