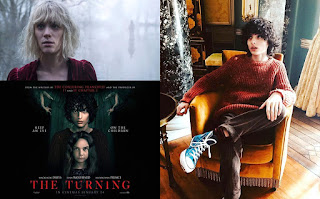 I’m not going to say this film is completely terrible... more like a beautiful sculpture left two thirds hidden inside the rock that contains the potential for that particular work of art.

Now I’ve never read Henry James’ Turn Of The Screw and, neither, have I seen any of the numerous official movie or TV adaptations of it, to date. I have seen a film once that was supposed to be ‘heavily inspired’ by the book but, alas, I figured out the end of the movie within the first five minutes of that one. In terms of this new ‘updated for modern times’ adaptation, The Turning, I have to say that I came to a conclusion fairly early on... again within the first five minutes of the movie... about how things were going to be revealed at the end of the film but, alas, although I’m pretty sure I was right about that, I have no way of knowing just what the heck the conclusion of this film actually was supposed to be. Yeah, I’ll get to that in a little while.

So, there’s lots of good stuff in this movie but it seems to be packaged into what might be one of the worst representations of what the movie might have been. That the film works best as an atmosphere piece is probably it’s main strength. The performances by the actor and actresses playing the four main characters... Mackenzie Davis, Finn Wolfhard, Brooklynn Prince and Barbara Marten... are all more than competent and work really well together at conjuring up a sinister, almost laid back sense of approaching menace. So that kinda helps things along and the two kids are quite exceptional. Brooklynn Prince knocks it out the park as the charge of her new nanny (the film’s main protagonist played by Mackenzie Davis) and Wolfhard from Stranger Things plays against type as a villainous brat of a brother. He’s hard to like in this so, yeah, he obviously delivered a performance which really worked then.

The other main plus is some beautifully composed shots in an almost washed-out colour palette which highlight the fogginess, uncertainty and shakiness of the reliability of Mackenzie Davis’ character. It uses some nice, fluid camera movement to capture the main protagonist as she walks around the house and grounds of Bly Manor... little works of art in themselves, some of these shots.

Alas, although these shots are pretty nicely captured... as is all of the material in the film... they seem to be edited to death in places. That is to say, the edits seem faster than the nature of the footage would seem to suggest or, indeed, required to make them work together. For instance, when Davis is walking somewhere on a very simple route, several smooth and slow shots of her journeying to her destination from all different possible angles are spliced together in a way that calls attention to the way the DNA of the movie has been cobbled together. It’s not quite a case of ‘MTV generation’, fast paced editing but many of the shots in this movie can only last 7 or so seconds before cutting onto another and then another shot of the same thing from a different angle when, probably, one held master shot would have been the better option. Or, at the very least, maybe the shots could have been transitioned easier by having them slowly dissolve into each other on the movement (assuming the pacing of each shot was the same). Instead, everything seems to be chopped up way more than it needs to be and the result is a very fractured feeling in the narrative which... well, I guess that could be used to wrong-foot or unsettle the audience but it just doesn’t seem to work positively here.

And the other thing, apart from showing two or possibly even three approaches to a denouement in the final quarter of an hour of the film which are immediately thrown over for another interpretation, is the fact that the film leads us to an ending which is a big reveal for the main protagonist but... and this is the thing... not for the main audience, because we don’t actually get to see what that reveal is. A face is revealed to Mackenzie Davis but it’s deliberately obscured from the audience so that we really do ‘feel the ambiguity, man!’ instead of being left with something that might have made a little more sense. It’s almost like, by this point in the proceedings, the director or producers decided that the ending they were building up to was way too obvious so they decided not to show us what that ending was and instead, immediately they lead us into a ‘pop song’ with footage which teases a possible build to resolution over the end credits and, yeah, denying us again. It just feels like they’re deliberately 'screwing' with the audience to wind us up by this point.

Not much else to say on The Turning, it has to be said. Disappointing and really not great to recognise that a different assembly of the footage captured may well have given us a fairly decent horror movie. I guess I need to read the book at some point now to find out just what the heck is going on... although I suspect the ambiguity depicted in this film might also hold true to the original work, perhaps. Yeah, I’ll get to it at some point. I’m not glad I saw this one, to be honest.
Posted by NUTS4R2 at 16:49