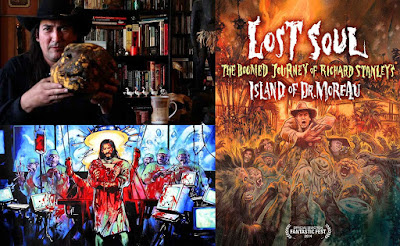 Richard Stanley is one of those directors I’ve always liked... and I finally got to experience him in the flesh last year in a Q&A about his latest movie Colour Out Of Space (reviewed here). I’ve never much been interested in seeing the misstep of a movie adaptation of The Island Of Dr. Moreau that Stanley was fired from and which was reshaped and made into the disasterous production starring Marlon Brando and Val Kilmer as director John Frankenheimer tried to resurrect a phoenix from the ashes of Stanley’s pre-production but I have, over the years, been fascinated by some of the stories coming off the experience so I’m glad I, almost accidentally, stumbled on this relatively recent documentary about how this happened here.

Lost Soul: The Doomed Journey of Richard Stanley’s Island Of Dr. Moreau is, as is to be expected, a lot of talking heads but the various heads that are talking here, including sizeable contributions from Stanley himself, are such that this does make a fascinating documentary. Intercut with quick scenes from Frankenheimer’s disastrous finished project for New Line, it goes back right to the kernel of the project with Stanley explaining all the ideas that came from H. G. Well’s famous novel, why he wanted to do a legitimate version of it in the wake of some historically poor adaptations of the material and all of the bad luck which dogged the project leading to his return, after going AWOL for a long time in the jungle, as a ‘dog-man’ extra in the film, unable to reveal his face to the majority of the cast and crew for fear of being prosecuted and not collecting his rejection fee. He’s in the final cut though.

Graham Humphries also turns up with the original concept art he did to help Stanley secure the green light on the film initially... indeed, he also did the cover art for this documentary release. He’s one of those people who seem to have turned up everywhere in the background of a lot of projects I’ve been watching or reading lately so, yeah, it feels almost like fate drew me to this one.

There are some great anecdotes about the politics and mechanics of a film that goes completely wrong which are, in fact, well... maybe not as opulent as the original director covertly returning to star in the film as a dog-man but, certainly, a lot more enlightening about how some of these kinds of train wrecks happen and, frankly, at this point in his career, I would have thought that anyone wanting to work a film set with Brando was kind of tempting fate a little too heavily anyway. Brando’s dead now, of course, so this tale of stardom gone mad, which is in some ways a rerun on a more absurd scale of the way in which he behaved on Apocalypse Now, can’t really hurt him. I tell you what though... if I were Val Kilmer then I don’t think I’d like to see many of these stories seeing the light of day. I’m amazed he went on to work on anything again after the way he comes across, second hand, in this and it’s really no surprise that he’s not in this documentary in anything other than photos, original footage and remembrances.

As with anything connected with Richard Stanley, there seems to be an almost supernatural hand in the way this production was put together, as he employed a witch to cast ‘fixing spells’ on his first meeting with Brando... who subsequently took to Stanley like a fish to water. The death of a couple of people involved in, somewhat, strangely grim ways, including the witch himself (you’ll have to watch the documentary to find out what happened to him) and the way that all the bad things came together at the same time Stanley was more or less fired from the project, are mentioned here and make you wonder just what kind of bizarre creatures of the nether-world that Stanley has stalking him... in either a positive or negative manner.

The film is also fairly educational to a layman like me. I’ve read stories featuring the Dr. Moreau character over the years but never Wells original novel (although I have read a number of his other works) and I had no idea that Wells had a falling out with Joseph Conrad when Conrad published Heart Of Darknesss a few years later which, allegedly, has a central character based on Moreau in a novel which has the same structure as Wells own. Conrad is said to have based the Kurtz character on Henry Morton Stanley (who famously said, “Dr. Livingstone, I presume.”) who, it turns out, is a direct ancestor of Richard Stanley. As far as the Brando behaviour repeating from Apocalypse Now goes... Apocalypse Now is, of course, Francis Ford Coppolla’s take on Conrad’s Heart Of Darkness... so even there, there is a strange kind of spooky symmetry going on, I think. Although that last bit about Brando is not a connection I remember any of them making in this documentary.

It’s extraordinary though, especially Stanley and Fairuza Balk, who was a good friend of Stanley at the time and who was one of the stars of the movie... both the original as it was to be attempted and then again, much against her will it would seem, the fiasco of a version of it that eventually materialised.

As you would expect from Severin Films, the disc is full of extras including a 48 minute series of outtakes of Stanley, followed by some shorter out-takes sections by other cast and crew members, of fascinating stories which never made it into the final cut. It’s interesting stuff and, as I’ve said before, Stanley’s almost soporific accent combined with a keen intellect and ‘mile a minute’ rapidity of speech were always, even on their own, going to be worth the price of admission here.

Bottom line, Lost Soul: The Doomed Journey of Richard Stanley's Island of Dr. Moreau is a great little curio about how a perfectly good film can turn into a nightmare for so many people in some unlikely ways. If you love the cinema then you would surely find this an insightful and fascinating project and it has much to be recommended. I’m glad I got the chance to see this one.
Posted by NUTS4R2 at 11:48