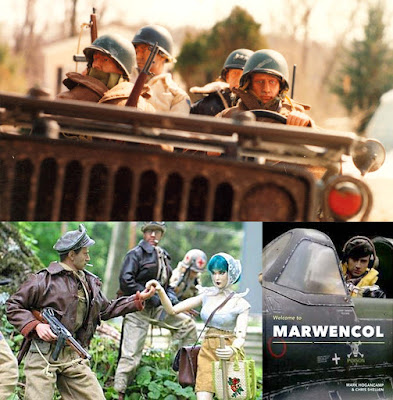 Welcome To Marwencol is a beautiful book that I was given by somebody special in my life for Christmas. It’s a gorgeous tome telling the story of artist Mark Hogancamp and highlighting some of his photographic work after he recreated himself in the wake of an almost life ending event. If any of this is ringing any bells then you should take a look at the movie about this guy, where he is played by Steve Carell, called Welcome To Marwen, which I reviewed last year here (and which ranked quite highly in my end of year films list). There’s also a documentary film about him called Marwencol which I will need to catch up to at some point soon.

Like many biopics, the Steve Carrel movie made a fair few minor changes to the truth of the situation and this book, which showcases Hogancamp’s work, seems somehow more up to date (even though it preceded the Hollywood biopic). It’s also a fairly depressing story and it goes something like this.

Ex navy man, illustrator and alcoholic Mark Hogancamp was in a bar one night when he admitted to somebody in there that he was a cross dresser. As he was leaving the bar, the guy he’d been talking to and several of his friends jumped Hogancamp and gave him a seriously life threatening beating which he almost didn’t survive. He was placed in an induced coma for quite some time because the injuries were so awful as his face was peeled back and the doctors gave him a prosthetic eye socket to replace the one which had caved in. When he awoke, he managed to recover enough to be able to speak and move about again but he has no memories of his life before the beating. However, from what he could learn of it, he has tried to improve his outlook on life from what it was... including giving up his reliance on alcohol.

After the accident, he could no longer draw because his hand shook too much and he was initially afraid to venture outside his home for quite a while. But then he started to build the fictional, miniature town of Marwencol, in Belgium, perpetually stuck in a bubble that preserved the time to World War II. He populated this with heavily customised dolls and figures of alter egos of himself and friends and, even the five evil SS Men in the town who cause so much trouble for ‘Hoagy’ are based on his real life attackers. The plots to the adventures he ‘records’ photographically and in incredible detail, sometimes get quite convoluted... with very specific death rituals to truly kill an SS man, to stop them from re-spawning and... a time travelling witch called Deja Thoris (I guess Edgar Rice Burroughs fans will know where she gets her name from). There’s even another dimension with a knight who brings permanent death to the characters and a nazi encampment built around the other side of Hogancamp’s trailer where Hitler lives.

And it’s a wonderful book. The photographic artwork is truly beautiful, capturing a curious blend of gritty realism juxtaposed with a kind of fairytale whimsy. Fairytale whimsy with alcohol, cat fighting, torture and horrendous bullet wounds. These photos are really a labour of love and are dotted throughout the book which explores Hogancamp’s ‘recreation’ as a human being and then looks at his technique (to the point where he eventually embraces the digital camera... he’s a braver man than I).

The book also shows off a little of his early drawing skills and also the plans he knocks up now if he’s adding a new building to his ‘set’. There’s even a photographic plan of the town on a double page spread where most of the buildings are. And the final little extra dash of brilliance, for me, was the fact that Hogencamp’s scaled down alter ego is also busy building an even smaller model town as a hobby in his plastic reality... there’s a wonderful shot of the figure with a box housing two very small figures. It’s great stuff.

The final third of the book houses a photographic comic strip... like those old Fotonovel’s from the 1970s and 80s, telling tall tales of small people and its both charming and, sometimes, possibly a little unsettling too. But it is wonderful stuff and it's the kind of content I could look at for hours on end. I wish they’d do a show of his work here in London, England sometime.

Anyone who’s into the world of model making, miniatures, dolls and action figures would really like Welcome To Marwencol and its a definite recommendation from me (as was the movie). I can only hope that there’s a follow up volume sometime soon and I would love to see some of the comic panels as larger shots, unencumbered by the commentary. For more information on Marwencol and to buy this wonderful book, go to http://marwencol.com and may your stay in the town be as enjoyable as mine was.