Doctor Who - The Timeless Children 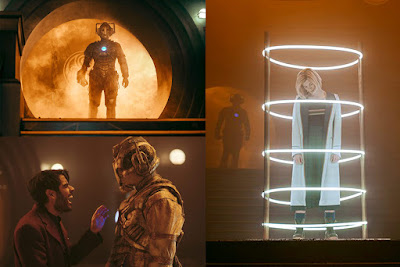 Without Time Or Treason

Well this was just a bit rubbish.

I had my fingers crossed this would be a good series finale but, alas, it really didn’t live up to the teasers laid out earlier in the year.

Okay, so I’ll do my usual shout out to the four really good things in the show at the moment... Jodie Whittaker, Bradley Walsh, Mandip Gill and Tosin Cole. They were all really great in this, as per usual although, it has to be said, they had some terrible lines to get through at certain points in the episode.

Following on from last week’s episode, it’s kinda revealed that Brendan, who I’d assumed was The Lone Cyberman, was actually probably The Doctor or, rather, a false memory of The Doctor implanted when her mind was wiped by her fellow Timelords because, unbeknownst to her (and to the loyal audience of the past 50 plus years) she was actually part of a secret team of special agents sent to wander around the galaxy giving help to those in need. Oh... and she’s also not a Timelord at all now but a mysterious alien from another dimension who taught a scientist from Gallifrey who took it in, how to regenerate... so yeah, that’s a lot.

I don’t mind them updating the origins of The Doctor a little bit, to be honest and that’s not my biggest problem with this episode. I’ll get onto that in a little while. And, also, it does help certain glaring continuity errors over the years such as the ‘Fourth Doctor’ having had so many previous lives shown to us in the 1970s story The Brain Of Morbius. Although, it also kinda screws that continuity too because, with this retro-fitted back story, he surely shouldn’t have been able to remember them in the first place.

Of course, none of this explains how, in the past, lady Timelords can try on new regenerations like changing clothes in a high street store or the fact that a future incarnation of The Doctor is the Valyard but, well, I guess at least they’re trying, right?

One of the issues I have with this episode is that certain things were just unbelievably obvious. For instance, the humans including two of The Doctor’s companions trapped on the Cybership get the bright idea to wear Cyberman armour to get off the ship. So immediately the first thing the mind jumps to is... well then please don’t let them have a terribly clichéd bit of Deus Ex Machina when someone is about to die at the hands of the Cybermen but then their friends are also around in Cyber armour to save the day. But, yeah... of course that happened. This is so jaded by now... would have worked much better in the sixties, methinks (and probably did). But this wasn’t my main problem with it.

Another problem was that all that stuff about not giving The Lone Cyberman what it wants, as per Captain Jack’s warning in the one outstanding episode of the series, was a bit if a red herring. In fact, The Doctor was able to use The Lone Cyberman to save the day, kinda, at the end of the story. Also, since that was therefore redundant and there was no Captain Jack in sight... well, bit of a nonsense then really, wasn’t it? That wasn’t my main problem with the episode though.

Also, was anyone listening when it was revealed that the death particle housed in The Lone Cyberman’s armour would destroy all organic life in the universe? Because, you know, a character cracked that particle at the end and it meant the destruction of Gallifrey, certainly but... yeah... not actually the universe now, was it? That wasn’t my main problem with the story though.

Oh, and did anyone notice that the Judoon who came to sling The Doctor into pokey at the end of the episode just materialised into her TARDIS with complete ease? Because... that’s not an easy thing to do, is it? Sneak onto the TARDIS undetected. There’s force fields and the like. That wasn’t my main grumble with this week’s show though.

You want to know what my biggest issue with this week’s episode was? Stop reading now if you don’t because it’s not mandatory that, just because you got through the rest of this whiny review you don’t have to bother with the last bit...

Okay, if you’re still with me... my biggest problem was this...

It was so dull.

Doctor Who used to be a fun show... even when it was getting very dark. This was not really all that entertaining... it was kinda of like a soporific actually. Even with nobody mentioning Omega or Rassilon (which is fine, they kinda brushed through their invention with one sentence), it was still spectacularly yawn inducing. I mean Whitaker was absolutely brilliant but she had some really stupid stuff to try and sell here. The fact is she did it pretty well but... did this feel like quality writing?

I dunno. Maybe I’ve just outgrown the show in some way... although I still enjoy a lot of the older ones up until the start of Matt Smith so, maybe not. I’m kinda glad that I don’t have to review anymore of these new Doctor Who stories until either Christmas or the New Year, in the upcoming Revolution Of The Daleks special, that's for sure. There will still be plenty of old school Doctor Who reviews coming to the blog over the next 9 months though... starting with a forthcoming look at the classic story The Ark In Space.

As for The Timeless Children though.. I wouldn’t recommend it, to be honest. Especially if you’re a Doctor Who fan.
Posted by NUTS4R2 at 20:02