Tales Of The Shadowmen 15 - Trompe l'Oeil 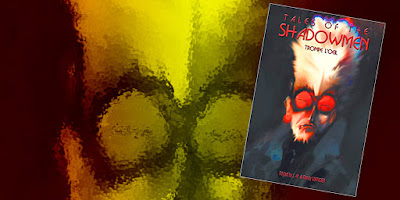 I previously reviewed the first 14 collections in the Tales Of The Shadowmen series here and explained about my annual ritual of receiving the next volume in the series either at Christmas or for my birthday a couple of weeks later. And, as I said before, since these things aren’t published until December each year I’m usually one year behind when I get to finally read these things. It’s a cycle I keep meaning to break (if I ever get time around all the other things I’ve got to read) but for now I will quickly... very quickly in this case... cover the December 2019 release which I read a little while ago, Tales Of The Shadowmen 15 - Trompe l'Oeil.

As usual, the gallery of stories by different authors on offer, all utilising two or more heroes, villains or supporting characters from known literary (and other) works and then mixing them together in the same stories, is a bit of a hit and miss affair. As is sometimes the case, actually knowing the characters that are being continually referenced in these stories is part of the fun. This is not to deny that, when a really good writer gives these tales a go, even if you are not acquainted with the character of choice, they will be gripping reads. Usually these books are, once you get the first few volumes out of the way, more hit than miss but occasionally you get a volume where it’s maybe not quite as engaging as previous volumes and, I think that’s definitely the case here.

The book starts off fairly strongly following a short, dimension hopping tale called The Vertigo by Daniel Alhadeff. Like many of the characters in this particular volume, I hadn’t heard of the central protagonist and the brief intro to this tale gave him the hint of an atmosphere which didn’t seem to tally up with what I was actually reading. Frankly, the style it had been written in reminded me of an entirely different flavour, that of the Jerry Cornelius books by Michael Moorcock (I reviewed the movie version of one of them, The Final Programme, right here). So I was pleasantly surprised when a character from that series, Miss Brunner, turned up as one of the main characters a little later on... now it made sense as to why the writer was delving into this style.

Another stand out would be when the human-sized spider detective character, Spiridon, goes on a mission where the villain turns out to be another in a long line of Dr. Moreaus, who is also in this tale, responsible for the creation of the giant ants seen in the film THEM!

In other stories you will find the usual mash up of characters and ideas and, if you want to see what happens when Professor Challenger invents time travel, or when a very young Alfred Hitchcock gets involved in a plot involving Rouletabille and Harry Dickson, then this is a tome for you.

I particularly liked a tale by Travis Hiltz set around a time traveller marooned in Medieval France being assisted by the Wandering Jew to help rid the locals of Rotwang, from Metropolis, who was controlling not just Maria but the Volkites from the old Republic serial Undersea Kingdom. Another story has the Nyctalope and others trying to round up Edgar Allan Poe from 1940s America after he has been displaced by 'The Philadelphia Experiment'... a story in which a certain Ian Fleming spots James Bond’s name on a copy of the Field Guide To Birds Of The West Indies and notes how bland a sounding moniker it is (which parallels the real life creation of his famous character of course). They also refer to Edith Keeler in this story and how two other time travellers (which would be Kirk and Spock) allow her to die at her alloted time. You may remember this character played by Joan Collins in the Star Trek episode City On The Edge Of Forever, of course.

Other appearances of note might be the son of Bernard Quatermass, Indiana Jones, Doctor Omega, Liz Shaw, The Master and an interesting Carnacki tale where the Bachus is responsible, in a roundabout way, for the Whitechapel murders believed to have been committed by Jack The Ripper. Not to mention more than a few appearances in various stories for Les Vampires’ number one figurehead, Irma Vep. Another interesting story by Nigel Malcolm called Enemies Of The People is set in Paris in a future that is obviously an homage to the world created by Ridley Scott in Blade Runner. In this, after a near fateful encounter with the being that may or may not be the original Fantomas, Judex joins forces with Michael Moorcock’s character Una Persson and the Nyctalope to try and survive the corrupt government that wants the ‘terrorist’ Judex dead.

Out of many of the Shadowmen collections, I wouldn’t say this particular one is a good jumping on point. Asides from taking on some tales originally written for an unpublished volume collecting stories about characters from the Hexagon Comics range (an imprint I’m not familiar with myself), there are also a lot of tales which are follow ups from various yarns told in other volumes... such as Brian Gallagher’s latest chapter in the ongoing history of Captain Vampire or the latest yarn in the continuing exploits of Felifax.

All in all, it’s not the best in the series but, honestly, some of these collections are so entertaining that they can afford to have a few misses every now and again. I’m not a hundred percent sure I was fully on board with the Madam Atomos, tale where it turns out she was responsible for the death of John Lennon... I dunno, it just felt a little in bad taste to me but that’s no excuse not to let any writer or artist do what they want so, yeah, no real complaints from me there.

Tales Of The Shadowmen 15 - Trompe l'Oeil is not one of the best entries in the series but regular readers should get something out of this, I think... especially if they are enjoying the specific tales which, in some ways, could be seen as multi-parters. As I said, though, I wouldn’t jump into this one if you’re new to the series. Best to start off with one of the earlier collections if this is the case. Check out the full range of these and many other interesting curios at https://www.blackcoatpress.com if you want to peruse a publisher who has some very interesting volumes on the market.
Posted by NUTS4R2 at 20:06