Lust For A Vampire 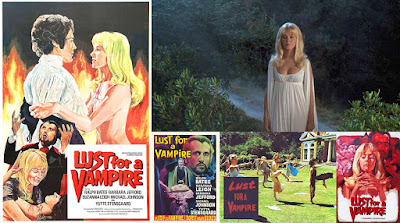 Warning: Slight spoiler at the end.

Lust For A Vampire is the second installment in a trilogy of films put out by the Hammer Studios based loosely on Sheridan Le Fanu’s 19th Century gothic, lesbian vampire tale Carmilla. The first in the series, The Vampire Lovers (which I reviewed some time ago here and which can now be found in a much better Blu Ray version), was the first of a short series of attempts by Hammer to spice up their films with partial nudity and sex in an attempt to reclaim some box office after the company, if memory serves, had started its decline... at least in terms of generating revenue.

The results of their new approach to a more ‘sexified’ horror genre can be seen straight away in the amount of nudity and syrupy sapphic seductions in The Vampire Lovers which was, I have to say, still fairly faithful to the original story. For this direct sequel... well, things are much less connected to the source material other than the central character of Mircalla, who is of course an anagram of her real name Carmilla Karnstein, the vampire at the heart of Le Fanu’s story. However, there’s definitely a continuity problem in terms of the female lead here...

After her death in the last film... almost a century ago, some of her surviving vampire family who were somehow not mentioned in the last movie resurrect her from the skeleton she has become in a black magic ceremony. When she sits up in her coffin in one of two fairly iconic Hammer Glamour shots in the company’s history to be found in this movie, she looks nothing like Ingrid Pitt, who played her in the last film. That’s because in this one, she’s played by the equally beautiful Yutte Stensgaard who looks spectacular and does an okay job with the script she’s given to work with. However, the role was originally offered to Ingrid Pitt to reprise her turn from The Vampire Lovers but after, she’d read the script to Lust For A Vampire, she turned it down and went on to make Countess Dracula for Hammer instead (reviewed here).

After a few scenes in a church and a public house which serve to introduce us to young male hero of the film, Michael Johnson as novelist Richard Lestrange, the majority of the rest of the movie is set in a finishing school for young ladies in the locale of Carmilla’s old castle... as Mircalla starts to seduce and eat her way through the school in a fairly sedate fashion. Until things finally catch up with her and she and her family are cornered in the church by a proper, traditional ‘angry mob’ armed with lighted torches and so on.

And it’s certainly an entertaining ‘romp’ for sure. Not actually a good film in any shape or form but I certainly had a good time watching this one. Why is it not a good film? Well, let me list some of the things here... I know director Sangster was an eleventh hour replacement, as were some of the cast and I know some people were less than enthusiastic about being in it... especially after they’d seen the final product.

Let’s start with the acting. The one really good actor who looks like she actually wants to be here is Suzanna Leigh, playing the ludicrously named fitness teacher Janet Playfair. Yes, that’s right, fitness teacher as the girls in their flimsy clothing slowly move around seductively to the sound of a harp in front of the school. If ever there was a film which gives the ‘male gaze’ a bad name, it’s surely this one.

By contrast, Johnson seems to be less enthused by his place in things and the other male lead, local history teacher Giles Barton, is played by Ralph Bates in a way that would certainly cause anyone to think that this was definitely not his best work. Mr. Bates thought it was the worst performance he’d done in the worst movie he’d been in, by all accounts. It’s interesting because he seems to be playing him in the same way that George Lazenby played a certain aspect of James Bond in On Her Majesty’s Secret Service (reviewed here). In that film, Bond assumed the identity of an English scholar played by Stanley Baker and he uses a well spoken accent and a timidity which looks and sounds vaguely ridiculous (despite it being the greatest James Bond movie ever made). I believe Baker even overdubbed George Lazenby’s impersonation in the finished film. So we have Ralph Bates coming across as a fop, regardless, in his personal obsession about the fate of the Karnstein family. Actually, I believe the role was originally written for Peter Cushing, which makes much more sense but Cushing had to be ‘let off’ the role when he had to go and care for his very sick wife. Which is unfortunate.

And then there’s Mircalla herself. Stensgaard looks great in the role, despite looking nothing like the version of the character from the previous film, when Ingrid Pitt played the role as a very confident young vampire, manipulating her victims to her own ends. Here, she’s the absolute opposite and comes across as an innocent victim being made to live up to her family name. Not Stensgaard’s fault of course, if that’s the way the script portrays her in this then she just has to say her lines and take her clothes off at suitable intervals and her job is done. It would have been nice if it had gelled better with the previous film, however.

And then there’s all of the sex and nudity, which was pretty much the mission brief for Hammer at this point. The Vampire Lovers was never exactly subtle about the unclothed state many of the cast found themselves in at regular intervals but Lust For A Vampire really outdoes itself for inserting inappropriate material and comes across, a lot of the time, as a vampire movie mixed together with a Mary Millington flick. Honestly, any excuse here and they’re all at it...

For example, when a young girl is placed on a church altar to be sacrificed early in the film, she is placed face up in front of the camera with her head hanging upside down and taking up the bottom half of the shot while her prominent bosoms are thrust up towards the top of the frame. Like I said, there’s not a lot of subtlety within this one.

Another historically iconic shot of Yutte Stensgaard sitting up topless in bed comes about when she’s simply massaging her neck and the student with whom she shares a bedroom offers to take over. The next thing you know, the movements about her neck causes her diaphanous night wear to inexplicably fall towards the floor, leaving her hanging, so to speak. It really is just like those old Kenny Everett sketches from the 1970s and early 1980s when he played a Hollywood starlet who used to constantly proclaim, “when suddenly, all my clothes fell off.” Yeah, this movie certainly is fun, for sure.

It’s not just the ‘schoolboy erotica’ content of the film which make it such a pleasure to watch either.

For instance, there’s a member of the Karnstein family who mostly just looks sinister and can be found lurking in the background to a lot of scenes. There’s one shot of two women kissing in a pool and we suddenly cut to a real non-sequitur of a shot depicting him standing with his hand on his hips at a funny angle while the music suddenly gives us this real, over the top howler of a stinger to tell us that what we’re looking at is really bad... although, I have to be honest, without that musical cue I would never had realised anything bad was happening in the scene at all.

And talking of musical stingers... the sequence where Mircalla tries to seduce our buxom Miss Playfair is accompanied by what I can only imagine was supposed to be the ethereal sound of her hypnotic gaze. However, it kinda just comes across as a bit of an over-the-top, speeded up, higher pitched version of the sound the ants make in the movie THEM! so, yeah, again it’s quite hilarious, I have to say.

There’s some nice stuff too.. with a dream sequence using shots from the movie washed out into single colours, a little like the posterised, opening sequence to The Monkees movie Head... and there’s a nice moment in a sequence where the footage of vampire bites revealed on a woman’s neck from earlier in the film is tinted out into a pale green with the bites shown up as a vivid blood red against everything else... which was nice. Unfortunately, the whole dream is accompanied by a truly, hilariously inappropriate song singing of the character’s ‘Strange Love’ and, yeah, I’ll just stop there. And it’s nothing compared to the bizarre faces Miss Stensgaard makes when the camera is focused on just her eyes... which sometimes become cross-eyed when she is emoting her ecstasy at the carnal things Mr. Lestrange is doing to Mircalla ‘out of shot’. How she kept a straight face doing that I’ll never know.

And goodness knows why they have the same actor who played the butler in the previous film as a police inspector in this one. He’s actually quite a good little character actor by the name of Harvey Hall. He wasn't in much but he even turns up, playing yet another character, in the next film in the sequence, by the looks of it.

Anyway, not much more to say about this one apart from one of the vampire characters, I’m not saying which, having a somewhat unusual but nevertheless stupid death whereby the pointy rafter from the burning roof of a church splinters off and drops to stake said vampire through the heart. The film keeps running through the end credits to remind us that these particular vampires can’t be hurt by fire and thus it’s a thread that can be yanked on for a sequel, although this is not actually used in the next one, from what I understand. I’ll let you know for sure very soon.

As was set up in the earlier Karnstein film, these particular vampires are quite happy to walk around in sunlight but the unfortunate thing Hammer have done with the Carmilla character is they’ve not based any of this on Le Fanu’s source (which is fair enough, they already did that in the last movie) and without that, this becomes just another vampire movie which could easily be told with any old vampire in the lead. Which is a shame but, despite the films shortcomings... or rather, because of them, Lust For A Vampire is a very entertaining affair and I have to say this is definitely something I’d watch again a number of times in the future. Perhaps best recommended only to fans of a certain period of British produced horror films but yeah, I kind enjoyed this one. Looking forward to seeing the third movie in the series, Twins Of Evil, very soon.
Posted by NUTS4R2 at 20:51