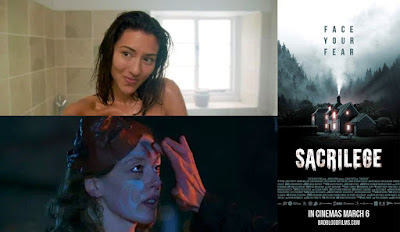 Sacrilege is a UK horror movie which falls into that unfortunate subgenre known as ‘folk horror’, to an extent. This would include films such as Blood On Satan’s Claw, The Wicker Man and the recent Midsommar and... I say unfortunate because, well, I’ve never really gotten on with folk horror movies, for the most part. That being said, Sacrilege is actually a pretty entertaining film, albeit with some problems, one of these being that, just occasionally, its low budget status is somewhat noticeable... but only in parts.

The film tells a tale of four girls... Kayla (played by Tamaryn Payne), Trish (Emily Wyatt), Blake (Sian Abrahams) and Stacey (Naomi Willow)... who decide to go on a ‘girl’s weekend’ in a cottage in the country but, alas, the local community invite them to their ritualistic festival where they are targeted by their protecting demon in exchange for ‘a good season’ and by the next morning, the supernatural shenanigans have already started.

Probably the best thing about this movie is the chemistry between the four lead characters. I’ve always been a bit confused about the conversations and body language I’ve observed from afar of ‘girls’ night out’ style get togethers and I was equally baffled by the way the ladies in question were acting around one another here... so this does ring kind of true to me that the film has a good handle on the dynamics of that kind of camaraderie.

Another good thing is that it moves along at a fair lick, not outstaying its welcome and getting into the typical horror movie shenanigans fairly quickly, once the ‘party’ night has played out. There is a small element of goriness to the proceedings but I’m not sure that it was enough to warrant the 15 rating it received here, I think.

Some of the film does look a little cheap in places but, that being said, the cinematography is quite stunning in some sections and everything is cut right so you’re never at a loss to know what’s going on from scene to scene.

One of the worst things about the movie is a lesbian sex scene between two of the lead characters (at least three of the girls are implied lesbians or bisexuals)... let’s just say that there’s nothing to see here. The extended scene of sexual hijinks between the two ex-lovers who are reunited is shot in such a way that, amazingly, you don’t get to see anything of the girls other than hands and backs covering the more interesting parts of the undisplayed anatomy. This is where the film really started to lose credibility with me, it has to be said. There’s nothing worse than a ‘bashful’ love scene which is fabricated in such a meticulous way that nothing is on show. Better to have left this out completely than to tease the audience in a pointless exercise of hidden virtues.

The other main bugbear for me was the ending. For one thing, it had a sloppily quick denouement which didn’t amount to much and which exploits the clues fed to two of the girls in the earlier parts of the movie to give us a fairly formulaic approach to the way in which they can weaken the forces of darkness. To make matters worse on this front though... the science of the supernatural heart of the film, so to speak, doesn’t really hold up in any logical fashion. At the start of the movie there is a pre-credits sequence where a guy is killed in a wholly ‘otherworldly’ manner. However, the deaths which follow in the later parts of the movie are bound by a certain set of laws which, frankly, this opening sequence blatantly ignores. I mean, yes it’s a cool effect at the start of the movie but the way in which this death is presented just plays at odds with the ‘accidental suicide’ incidents which all the later death scenes involve.

Also, having seen the bizarrely out of place ‘very pistol’ in the dashboard of the van that the girls are driving... you pretty much know that it must be there for a reason and it’s going to get some action later in the film. Alas, the use of this item in a somewhat fizzling end sequence really doesn’t help matters in terms of giving the thing an exciting finish and I’d have to say the build up throughout the film, which at least evokes a certain kind of ‘scareless’ atmosphere, is much more interesting and watchable than the ending, which doesn’t even leave much for anywhere to go in terms of loose ends, it has to be said.

So there you have it... Sacrilege is a not bad little British horror film which sadly wears its budget on its sleeve on occasion but which makes up for it with some interesting acting and a fast pace that will at least mean you won’t get bored. Definitely one to check out if you’re into this kind of thing but, perhaps not a recommendation for those who are not best friends with the genre.
Posted by NUTS4R2 at 19:38