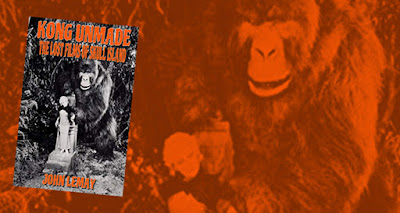 I’m guessing that not many of my readers will remember the Batman VS Godzilla movie, where Adam West’s character is shown footage from King Kong Vs Godzilla to learn how to defeat The Big G. Or the 1934 Tarzan VS King Kong motion picture? Or how about the couple of King Kong movies that England’s famous Hammer studios tried to make?

Not to worry if you don’t. These films obviously never happened but are certainly among the many attractions in John Lemay’s entertaining resource, Kong Unmade - The Lost Films Of Skull Island.

This epic tome, like the other ‘lost films’ book I reviewed relatively recently, Harryhausen - The Lost Movies (you can read my review here) doesn’t just tackle the ‘completely lost’ films of the expected subject matter. In the case of Lemay’s book, we also get reviews and development stories for existing Kong related features including, of course, the original film and its direct remakes but, also, classic rip offs like The Mighty Peking Man and Konga.

There are, of course, a far amount of lost films in here too... the main meat, so to speak and, I suspect it’s the inclusion of all of these that will be of most interest to people compelled to pick this one up. And it is, to be clear, a fairly entertaining and informative romp through the beloved ape’s vanished film career.

The book starts off with the lost film Creation, which fans of the cinema and animation of Willis O’ Brien will no doubt already be aware of. This, of course, along with his finished version of Arthur Conan Doyle’s The Lost World as a direct result of this failed project, would lead to the original motion picture King Kong. Creation itself was, it seems, half cribbed from the first of Edgar Rice Burrough’s Caspak trilogy, The Land That Time Forgot (which was also made into a film, along with its first sequel, in the 1970s of course). Where relevant, Lemay points out where scenes from various lost projects have been reworked by either the original creators or other producers into movies which did see the light of day, albeit not necessarily having anything to do with King Kong by the time they did. This in itself makes for some interesting reading... as do the various copyright issues regarding both the movie and the separate copyright status of Edgar Wallace’s novelisation (which actually pre-dated the movie in terms of release to the world at large) and the consequences for ‘would be’ directors down through the decades.

It also includes films like the puppet Kong remake The Lost Island, which would have had Mae West voicing Ann Darrow and Groucho Marx voicing Carl Denham. This production was abandoned due to rising costs but some photos still survive and, what was probably the most famous one (even I can remember it from books from the 1970s) is used as the cover to this edition of Kong Unmade. Like the cover shot, I’ve only ever seen black and white stills from this half finished production but if it had been finished it would have been the first 'one reel' movie to be shot in Technicolour so... yeah, would have liked to have seen that one.

Among the many surprising revelations Lemay nonchalantly drops into his book is the fate of a proposed 1940s movie, Abbot and Costello Meet King Kong. This would have been awesome but was eventually abandoned and, instead, became two other Abbot and Costello films, one which did indeed have an ape in one scene and the other being Abbot and Costello Meet Captain Kidd which, apparently, still features Skull Island in the finished film but, alas, it isn’t populated by either dinosaurs or Kong himself.

Another interesting production is the one which was trying to beat Dino De Laurentis’ 1976 remake into cinemas but eventually got called off before shooting had actually started. This was to be called The Legend Of King Kong and was due to star Robert Redford (or Nick Nolte if Redford walked) in the Jack Driscoll role and Peter Falk as a much less sympathetic version of Carl Denham. There’s a quite long chapter which summarises the full script and it really does make for some interesting reading.

Other items of note might be the inclusion of some of the Italian posters for the Godzilla movie Destroy All Monsters, which all seemed to somehow break copyright law and depict King Kong on them... he certainly isn’t anywhere to be found in the film itself although Toho Studios did try and make some other King Kong movies asides from their existing King Kong Versus Godzilla and its sequel King Kong Escapes. Not to mention the 1958 stab at King Kong VS Frankenstein.

There’s also a truly great section on an aborted TV animated project called Kid Kong reproducing loads of Robert Lamb’s original sketches for the proposed show, which has some nice work in it.

In addition, some of the history behind some of the famous, released ‘inspired by’ films that did make it to the silver screen is also very welcome and entertaining. Take the ‘British King Kong’ movie Konga, for example. I learned from this book that a few nights shooting in Croydon culminated with the last night which the director had earmarked for all the gunplay and explosions, after he’d bribed the local chief of police to secure permission. This last night’s shoot resulted in 300 or so emergency phone calls to the police from the general public but the director managed to smooth things over from being prosecuted by sending flowers and chocolates to all of the people who had called in. So that’s an interesting story... I should probably get around to rewatching that one for this blog sometime soon. It’s been well over four decades since I last saw it and I think I bought a Blu Ray in a sale at some point.

So anyway... not much else to say here other than John Lemay makes the whole thing very entertaining and goes into a lot of detail on various productions where he’s able to. I could have happily heard a lot more about the Batman Vs Godzilla project, to tell you the truth, like how come it was 1965 when the show didn’t come out until 1966? I guess it must have been mooted fairly early on in the show’s development but there’s obviously not enough material and, due to it being more about Godzilla than the little bit of Kong footage, it’s been placed in one of the book's four appendix sections instead. Still, Kong Unmade - The Lost Films Of Skull Island is another great treasure of a book for any cineastes or even casual film fans who I’m assuming know the importance and influence of the 1933 King Kong (reviewed by me here) and the huge footprints it made in the annals of cinema. Definitely one for the film lover’s book shelves, for sure.
Posted by NUTS4R2 at 17:37