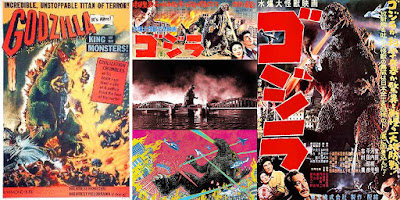 This Big G Criterion Collection box set of The Showa Era wave of Godzilla films is probably one of my more pricier Blu Ray box set purchases of recent years. It’s kind of worth it though because, for this specific wave of films lasting between 1954 and 1975, it’s very nearly the Holy Grail of Godzilla releases that fans and admirers of the movies have been waiting for over the years. Not quite the release we wanted, for sure and... I’ll explain one of the reasons why that's so in my review of the second and third films in the series but... well, it’s damn near to being the perfect set of these films and, in addition to some beautiful Blu Ray transfers, the packaging of an oversized hardback book with absolutely beautiful new commissioned illustrations for each title is nothing short of being an absolute work of art. Yes, it’s an expensive set but Criterion have really lived up to their usually exemplary standard with this release.

Gojira is, of course, a combination of the Japanese words for gorilla (gorira) and whale (kujira), which is how the creature was originally conceived, gaining a more dinosaur-like appearance as pre-production continued. It was apparently the first Japanese film to be properly storyboarded but, knowing Kurosawa’s attention to details on his own films for Toho (he was doing Seven Samurai with one of the main cast members of this, somehow, while this was being shot), I’m not one hundred percent that the storyboard thing is true, to be honest.

The original Japanese version of the film is definitely one of the highlights of the series. Unlike many of the later movies, Gojira is not Japan’s defender against attacks by other giant monsters or alien invaders. Here’s he’s definitely the antagonist of the movie and the film starts with a scene inspired by a real life disaster (where a Japanese fishing boat strayed into an American testing zone for nuclear bombs and the crew were irradiated) but with the light and heat of the ‘as yet unseen’ Gojira boiling the water around a full crewed ship and sinking it... pretty much killing everyone.

After a couple more downed ships and a subplot involving an ancient Gojira legend, with some folks living on an island who are attacked in the night by the titular creature, it is up to my favourite actor Takashi Shimura, as palaeontologist Dr. Kyohei Yamane, to advise the military of just what to do as Gojira, a supposedly Jurassic era beast reawakened by H-Bomb testing, starts tearing down Tokyo and generally having a ‘gorilla-whale’ of a time. He is aided by the three who make up the love triangle of other main protagonists of the film... his daughter Emiko, played by Momoko Kôchi (who would return to this role in the 1980s in her last film appearance), her new almost-boyfriend Hideto, played by Akira Takarada and her fiance, the self sacrificing Dr. Serizawa who, played by Akihiko Hirata, invents the ‘oxygen destroyer’ that kills Gojira and which would make an appearance in some of the later films in the other two waves (heck, the oxygen destroyer was still being used as a narrative device in last year’s big  budget US production, Godzilla - King Of The Monsters, which I reviewed here).

The film starts strongly with the footsteps and roars of the creature playing over the long opening titles, even obscuring Akira Ifikube’s tremendous score as the opening plays out and then into the terrifying nautical scene described above. There’s some great stuff where Dr. Yamane finds a trilobite in the radioactive footprint of Gojira and some nice details such as how, just like the corona virus, the appearance of The Big G also affects the local economy when the fishermen find their nets empty as all the fish in the area have been eaten or scared off by this behemoth.

The film is quite grimly told with no punches pulled. Gojira’s ‘heat breath’, here depicted as steam when, as in later incarnations, the fins on his back light up, is saved until almost an hour into the 96 minute film but the grimness comes not from his rampages, which are few in number... but from little details such as the radioactive poisoning of all the kids in a hospital. Or the moment where we see a mother sitting by a soon to be destroyed building, clutching her three infant girls to her and telling them they will be joining their, presumably very dead, daddy where he is very soon now.

And the tone holds. Yes, there are some silly bits too, like when Serizawa reveals the horrors of his ‘oxygen destroyer’ and Emiko asks him what would happen if his discovery is used for some awful purpose but, mostly it's quite dark. It’s at this point in the proceedings that I have to question what the heck positive, 'non-awful purpose' there could possibly be for a substance that destroys all the oxygen in a body of water, disintegrating all life there. This is a weapon, despite the protests of its troubled creator.

It’s perhaps not always noted but Honda has some nice shot compositions in here too, when he’s not having to deal with ‘man in suit’ destruction of miniatures, such as a wonderful moment when four characters are seen in a multilayered set with a dining room as the middle layer from the camera and another room in the background, all the actors framed with an almost square box made up of multiple verticals and horizontals thrown up by the different depths of the rooms we are looking at. Nice stuff.

For the record, some of the effects work is still quite impressive, with some almost seamless blending between the shots of people fleeing Tokyo stitched together with the same shots as Gojira wrecking the miniature Tokyo above them. Quite spectacular for its time, no doubt and... still holding up very well by today’s standards, as far as I’m concerned.

And, of course, there’s the ‘Japanese John Williams’, composer Akira Ifukube, who worked on several Godzilla scores and whose themes from this series are still being used today (again, check out Bear McCreary’s use of them in last year’s Godzilla - King Of The Monsters release). The score is a mixture of ‘terror cues’ which play like extended stingers and strident, jaunty marches which are full of melody and charm. The film is well ‘spotted’ too, with long passages with no music and some of Ifikube’s memorable melodies being held back until just the right moment to let loose, the main Gojira march re-occurring when the military mobilise, for example. A great score which has been reissued many times over the years.

Courtesy of this new Criterion box, I was also able to revisit this movie in the very first version I would have seen it in, when I was five or six, on early 1970s British TV. This is the famous... or possibly infamous... 1956 recut intended for American audiences. Lots of new footage was shot with Parry Mason actor Raymond Burr (his footage was all shot in six days) playing reporter Steve Martin. Even though a lot of footage is added, the US version still manages to play a quarter of an hour shorter than the original cut and... well it’s not the same film at all. It’s a lot faster and somehow very clumsy while at the same time having some very creative, if often hilarious, ‘solves’ to re-pitch the story in a form the distributors obviously thought would play better in the US.

It starts off quite dramatically with Burr pulling himself out from under a collapsed building, covered in blood, as he begins narrating the story and often integrating with.... the back of other peoples heads who speak the lines before cutting to a face on view of the actor from the original version. The American dubs are often quite hilarious and quite often reminded me of a clumsier version of the movie Dead Men Don’t Wear Plaid, where the real life comedian Steve Martin (not to be confused with the character of the same name who Burr plays here) is inserted into old film noirs.

And it’s amazing the lengths they go to in order to make Burr look like he belongs in the film. He always seems to be waiting on the sidelines of any particular scene, on replica scenery, with his Japanese friend who can translate for Burr and the audience just what is going on when all the actors are speaking a different language. He even rings up his ‘old mate’ Dr. Serizawa and when we see Serizawa, who wears an eyepatch on his right eye, pick up the phone... it’s obviously another completely different actor in profile, with his eye patch towards the camera in the hopes the audience won’t notice this, perhaps less than blindingly clever, deception.

It’s an interesting version too because scenes are literally deployed in a completely different order, with scenes from towards the end of the picture coming in very early and vice versa. They even split one scene in half and run the second half later as if it’s taking place days or weeks after the first half of the sequence. And even Ifikube’s score is sometimes clumsily redeployed, scoring different scenes to those it was written for.

The result... a different film which, despite the grim and somber expression on Burr’s watching face for most of the movie, never gets close to having the gravitas or impact of the original Japanese cut, which is easily the best version of the movie and the one it should be remembered by. Burr would, of course, reprise his Steve Martin role for a similar bit of recutting tomfoolery on the first of the 1980s Godzilla films when it was released in US theatres.

So, yeah, not much else to say on either of the cuts other than, you can probably, quite happily ignore the American version unless you are curious. If you want to watch Gojira as it should be seen... and that should frankly apply to anyone who is in love with the art of cinema... then the original Japanese cut is the way to go and it’s still a pretty great film.

The Criterion version also has commentaries for both cuts and interviews with some of the key cast and crew, including an almost hour long interview with Ifikube about the music which I haven’t had time to watch yet. The new Showa Era set from Criterion looks beautiful and so do the films in it. This is a very special set and lovers of cinema will want to grab this before it sells out for good. It’s not quite a perfect set but... it’s probably as close as we’ll ever get, I think.
Posted by NUTS4R2 at 17:38