Arabella And The Battle Of Venus 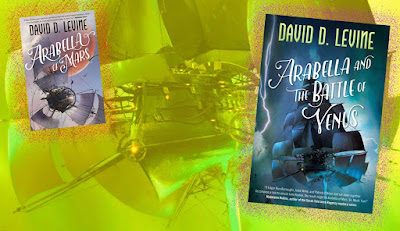 Arabella And The Battle Of Venus is the second of the phenomenally cool Arabella Ashby books. Following on just a few months after the end of the first novel, Arabella Of Mars (which I reviewed here), this one starts off like all good Hollywood movie sequels do, by trying to hit all of the same story points that made the first one in the series a success. So, set in an alternative, Victorian pulp style version of reality where it’s possible to sail galleons from planet to planet, the books tend to read as a kind of crossbreed between C.S. Forester, Edgar Rice Burroughs and Jane Austen.

So the book opens with Arabella in charge of her father’s plantation on Mars but her fiancé Captain Singh, acquired from the last novel as part and parcel of being allowed to take on the responsibilities of such a position (i.e. a lady would need to be married), already off on a voyage in the vicinity of Venus. The full reasons of this particular voyage are something Arabella... and the reader... do not find out until a fair way into the book so, I wont spoil that little surprise here but, despite the reasons, the Captain has been captured by the French and he and his crew, not forgetting his vessel Diana with it’s mysterious navigational automatum Aadim, are prisoners somewhere on the planet.

Yes, it’s a time of war and, despite being defeated and exiled to the dark side of the moon, Napoleon Bonaparte has escaped captivity and is waging war against the English around Venus. And not only that but he’s developing... oh wait, yeah, I’m not going to tell you that stuff because it’s spoilerific and you won’t want to know until it comes up. Whatever he’s doing there though, with the news that a particularly ruthless prison governor will be turning up to take charge at Captain Singh’s prison, Arabella bails out of debt a roguish but charming privateer named Captain Fox and persuades him and his crew to take their vessel Touchstone, accompanied by her and a chaperone, in a race to get to Venus before the new prison warder gets there... and try and break Captain Singh and the crew of the Diana out of captivity. Well that’s the initial plan anyway.

And, it’s all very well written and brilliantly entertaining but, after a while, I was getting just a little worried that this novel was going to be a repeat of the first one. Of course, more of a good thing is never unwelcome but I was concerned the whole novel was once again, more or less, going to take place on board the Diana. Indeed, there’s even an argument about the fine points of navigation wagered as a bet between her and Fox with a kiss and a dinner at stake, something which might be scandalous should Arabella lose her bet. As it happens though, Levine knows exactly when to change tack and about a third of the way through the book, Arabella and the crew of the Touchstone are also captured by the French around Venus and, through some smooth talking by Arabella, sent to work hard labour in the same compound as Captain Singh.

At this point, of course, the book becomes a prisoners of war story... which is not usually my favourite kind of tale, to be honest but... Levine once again proves himself a master of this particular kind of prose and it's riveting. And, once a certain bit of information comes Arabella’s way as to what Captain Singh was really doing in the vicinity of Venus, it becomes a rush to stage a prison break from the compound. This, in itself, is an impossible task with the penalty for people trying to run being a firing squad and with this particular compound on Venus being located so far away from anywhere else and in the midst of swampland, that it’s not really worth trying to escape it in all honesty. However, there’s another, more pressing reason to leave and ‘warn the British fleet’ as soon as possible (yeah, I’m really not telling you what, okay?) and so Arabella, Singh, Fox and their respective crews, not to mention a fair number of Venusian slaves... whose language Arabella has been trying to learn... make a bold bid for an escape under cover of the prisoners' amateur dramatic production of a Shakespeare play.

And the book is a delight. There are little surprises which turn up as the story takes slight turns throughout the course of the narrative, including Arabella attending a dinner party with Napoleon, an unusual navigational manoeuvre and a meeting with another famous person of the times in which this alternate reality is set, although, once again, it wouldn’t be such a surprise if I mentioned it here. There’s even a more darker, more permanent incident which visits itself upon one of the regular characters here which is, it is more than hinted, fixable and in such a way that the person who is victim to this particular blight would probably approve, as best they could, of this crippling misfortune.

Arabella And The Battle Of Venus is an absolutely enthralling read and, once the initial voyage to the shores of Venus is done with (and yes, even before that, truth be told) a real page turner. I was absolutely absorbed in the story pretty much from start to finish and my only question is in what direction can the writer possibly take his readers next? Well, I’ll hopefully know at some point sooner or later because I have the next volume in the saga,  Arabella, The Traitor Of Mars, on order as I type.
Posted by NUTS4R2 at 17:01