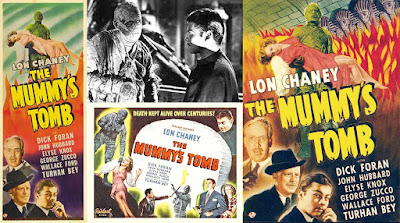 I think people tend to forget this when looking back on The Mummy’s Tomb but, this was a really brave movie on the part of Universal pictures at the time... especially in terms of the way you build a franchise. I’ll get to that in a minute. Alas, this is also the film where all of the continuity between the movies in The Mummy franchise is completely shot to hell and makes constant ridicule of the series much easier too.

This film calls back the two leading men from the last film... Dick Foran as Stephen Banning and Wallace Ford as Babe Hanson. However, the film is set 30 years since the events of The Mummy’s Hand (reviewed here) and so Foran is seen in ‘aged make up’ at the start of the picture, telling his son John Banning (played by John Hubbard, who was only two years younger than Foran in real life) and John’s fiancé Isobel (played by the gorgeous Elyse Knox)... and also Stephen’s sister Jane (played by Mary Gordon, who was Mrs. Hudson in the Basil Rathbone Sherlock Holmes film series)... all about his last adventure. Truth be told, even in his old make up, Dick Foran looks a little younger than the guy playing his son.

So what we have here, for the first ten minutes of the movie (and it’s only an hour long B-feature), is Foran narrating a series of no less than six sets of clips and highlights montages, replaying the salient points of the last movie. Interestingly, the footage used does not include the hand painted ‘dark eyes’ used in the last movie and Tom Tyler’s eyes are clearly visible in the shots of him in wrappings. After it’s over, Foran looks to the ‘aged’ photo of his leading lady from the last movie, who has apparently passed away in the intervening years.

Meanwhile, George Zucco, playing the high priest in the last movie, is also back as an aged version of his character who tells his new successor, Turhan Bey (played by Mehemet Bey), that the bullets only went into his arm! Kharis, the mummy, is also somehow back, not having perished in the flames that engulfed him in the last movie and looking... well, just a little bit singed really. Audiences might find this new version of Kharis hard to take because, as we are reminded from the flashback clips, he was played by Tom Tyler (of The Adventures Of Captain Marvel and The Phantom fame) in the previous movie but, from here on, Lon Chaney Jr dons the bandages for this and the next two sequels. The trouble is, Lon Chaney Jr is a heck of a lot pudgier than the slim, bandaged form of Tyler and, yeah, it really shows. Has this mummy been swigging beers for the last thirty years?

Even so, the new Kharis has a mission of revenge and Turhan Bay relocates to be the new caretaker of Mapleton Cemetery, in the same home town as Stephen Banning and his family. Here, Bey starts to carry out ‘Kharis destiny’ of revenge on the people and family of those who defiled his tomb. Once again, using the nine Tana leaves to animate him each night, we watch as the leading man from the last movie is strangled to death by Kharis. Seriously, how brave is that for a 1942 movie playing with audience expectations? Then, to attend his funeral, Babe is recalled to town but he’s too late to stop Banning’s sister escaping the same fate. Then, after giving various people the dope on the threat of Kharis, Babe is also killed off in a similar fashion. Wow... the two leading men from the last movie killed within the first 25 mins or so of the film that you thought they were going to be the heroes of. These days this would be known as a ‘passing the torch movie’, where one generation of characters hands over the franchise to the next generation of actors. Here, though, it’s only two years since these characters debuted so... yeah, I do think this is quite something in terms of a way of giving a franchise new legs (like the modern GI Joe movies). I don’t know if any other film franchises were doing anything similar at the time (comments below if you know of any) but I find this incredibly interesting and gutsy.

As a stand alone movie, it’s not bad. Lots is made of the shadows cast on walls by Kharis as he goes about his business and, I’m pretty sure the scene where Kharis kidnaps Isobel (because Bey fancies her himself and wants to do unspeakable things to her) is an homage, of sorts, to the 1922 German Expressionist movie, Nosferatu - A Symphony Of Horror, where similar use of the shadows of the monster’s hand creeping over the sleeping form of the leading lady is used.

The film ends predictably with bullets and fire, much like the last movie but, if you can handle the bizarre lapses in common sense, you will probably find that this is one of the more watchable films of the Universal Mummy franchise, although not as good as the previous entry in the series. Stock and re-recorded music abounds via Hans J. Salter, Frank Skinner, Heinz Roemheld and Charles Previn... which is just as well considering the strength of their scoring on The Mummy’s Hand flashbacks in the first ten minutes. Musical continuity is, at least, maintained therefore.

Of course the biggest problem is... the last movie was set in 1940. This film is set 30 years later in... 1942. Which makes no sense. There’s even a reference to John Banning getting drafted into the war so... what the heck is going on? What were the screenwriters thinking? Whenever I compare a new series of cinema movies which have really awful continuity between pictures, such as all of the X-Men films, I always invoke The Mummy series of the 1940s as something equally as terrible in this area. And, as I review the next two films in this franchise, you’ll see that the writers tend to compound these ‘errors’ in each one, not just in terms of time but even, in one case of outstanding inexplicableness, in location. Well, I’ll keep all that ‘under wraps’ until the next Mummy review and unbandage these things for you when I get to them.

However, if you can ignore the unbelievable stupidity of the continuity then, I think you’ll find that The Mummy’s Tomb is a real gem of a movie. Admittedly an unpolished gem but, all the same, the direction they went in to kill off the leads from the previous film when you least expect it is a real eye opener and you have to applaud them for their thinking here, at least. Always happy to give this one a watch.