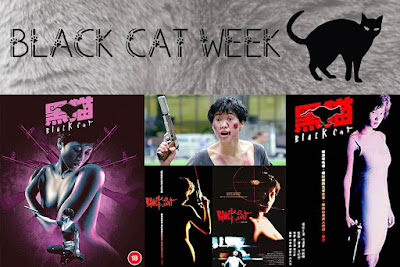 It would have been around the mid 1990s that I first saw Black Cat on a widescreen VHS release. I remember liking it a fair bit (turns out my standards were lower then, I think) and so I thought I’d revisit it via the new 88 Films boxed edition restoration (if they’d have boxed it together with the sequels, which I haven’t seen... I would have been more happier but, hey, maybe they wanted to see how the sales of this one did first... but count me in for the Naked Killer movies too, please).

One of the things which puzzled me about the new release is the blurb on the box which says that it was originally intended to be a remake of La Femme Nikita (one of my favourite movies by Luc Besson, known only as Nikita over here in the UK when it was first released... I watched it to death, week after week, at the old Lumiere cinema) from the year before but, when Disney bought out the rights to that film, the director was apparently forced to rethink. Hmm... well you could have fooled me. I remembered it as being a pretty blatant rip off of Nikita at the time I first saw it (one of many but, I could never bring myself to watch the American remakes... I knew the creativity would probably be sucked dry from the original concept) and looking at it now, I can only conclude that, yeah, maybe the director was forced to rethink but, having thought for a bit, maybe thought “Oh heck, I’m going to remake it anyway... up yours Disney.”

At least, that’s what I imagine his thought process was because, apart from having the main character and Anne Parillaud stand in Jade Leung, as character Catherine/Erika - Codename: Black Cat (depending on which personae she is adopting) going on different kinds of missions in the last third of the movie, there are a lot of similarities to Besson’s master work. And I mean a lot.

The set up is a different way for Jade Leung’s Black Cat to get into trouble with the law but, in this, her outright criminal mentality from the source movie is converted into a ‘cornered animal reacting to protect herself to survive’ set of incidents but the outcome is more or less the same. She is recruited by a special government section (actually named as the CIA later in the movie but, honestly, I would be worried about how the CIA was being portrayed here if I was part of that outfit) when she’s escaping her captors in this one. Then she is trained up in a very similar training montage to Nikita and then, after a similar ‘betrayal of a test mission’ by her recruiter, she is put out into the field to perform assassinations... but then becomes involved with a new boyfriend who she tries to protect from her bosses.

And that’s all I’m giving you on the story because, it does have very slight variances from the original material here and there but... not much.

Now, there are some nice shot compositions every now and again where the director and DP will do things like use either colour or large areas of minimalistic dead space within a shot to highlight a character but, for the most part, the film looks competent rather than visually enticing. It’s a ‘work a day’ action film and, on that level at least, it hits spot on. It’s biggest problem, however, because it does tend to ape Nikita right down to some of the costumes, props and various moments taken right from the original - the judo lesson, thrusting the spare gun clip (from pretty much the same gun) into the cleavage of pretty much the same dress etc - is that you can’t help comparing it to Besson’s earlier movie and, well, do that and pretty much anything else is doomed because Nikita is one of those almost perfect films where pretty much everything is done just right (although another partial remake, The Villainess,  which I reviewed here, is not a bad homage). Even the music by Danny Chung, plays like the editor used the Eric Serra score for Nikita to edit to and so, you can clearly hear the temp track coming through loud and clear as almost everything in the score (barring the cheesy romance music) is orchestrated similarly and bears a striking resemblance to that earlier score... like a low rent version of it (and I’m not blaming Chung here, he was obviously told to make it sound like the other score... which he certainly succeeds in doing here).

Now there are a couple of original (in terms of new to this story) concepts injected into this one but they are kind of underused. Black Cat has a chip implanted into her brain which gives her headaches to make her more obedient, so she is reliant on the pills provided by the company to stop the debilitating attacks which hit her very much in a similar manner to the old Sutra headache that Tripitaka used to inflict on the title character of the Monkey TV show in the 1970s. However, it's kind of under explained in terms of the other benefits she’s told it will give her and, yeah, it seems almost incidental to the plot. Similarly, a gun which shoots a bullet of ice which you have to remove from refrigeration five seconds before it’s loaded and fired, so the bullet dissolves in the wound and makes the weapon untraceable, is used only once and, again, it’s kind of incidental.

What saves this movie for me is the absolutely brilliant, almost feral performance by Jade Leung as the title character. Yes, the temperament of the character does match the one that Anne Parillaud manifested as Nikita but, even so, it’s a great turn provided by Leung here and she really goes for it. Some of it looks like it might have been a tough shoot too so, power to her. I wish the same could be said from some of the small, bit parts played by the American and Canadian actors but, yeah, some of them are just awful.

All in all though, Black Cat is actually quite an entertaining movie, once you stop comparing it to Besson’s version... a nice switch your brain off actioner. Now, I have to say that although 88 Films have done, I’m sure, the absolute best they could with the transfer, something seems off with the print... it’s almost like it was scanned in from an old video transfer but, I know that can’t be the case because this thing was run in 35mm in cinemas. But the film stock did look a little washed out, to my eye, in many of the scenes. However, the packaging of this one, if you get the first edition boxed with perfect bound booklet and lobby cards release, is absolutely first class... nice artwork and a box similar in quality to some of those put out by labels like Severin and Vinegar Syndrome lately so, yeah, overall it’s a cool package. And I hope 88 Films do some more of these films in the near future... as I said earlier, I’d love to see both the two sequels to this movie and the Naked Killer films given similar (or even better) treatment.