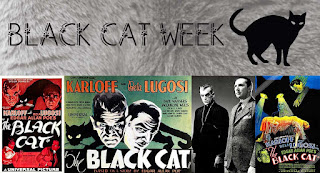 While it’s nowhere near the first ‘Edgar Allan Poe’ movie to do so, the 1934 version of The Black Cat certainly continued and upheld the tradition of being almost nothing of consequence to do with Poe’s short tale, despite the opening credits heralding it as being “Suggested by the immortal Edgar Allan Poe classic”... well, you can suggest and you can certainly lead a black cat to milk but, you can’t make it drink. I don’t blame the writers and director here for making something which has barely any relation to the so called source material... they weren’t the first and they surely won’t be the last. You see, if you’ve read Poe’s tales you’ll know that his short stories rarely lend themselves to having any of the kind of substance that would lend well to a cinematic retelling. They’re moody, short slabs of atmosphere and attempting to extract a screen story from them must prove almost impossible for some writers. That being said, one of the Poe inspired versions of The Black Cat put out by Hemisphere in the 1960s (which I’ll review on here this week) is pretty darned close and shows just what can be done with an enthusiastic approach.

This version was the first of eight films to team up Universal’s newest horror superstars, Boris Karloff and Bela Lugosi. The film also features a freshly married couple as protagonists, Joan and Peter, played by Julie Bishop and David Manners. Manners himself, of course, already had experience playing the leading, male romantic interest opposite both Lugosi (in Dracula, reviewed here) and Karloff (in The Mummy, reviewed here). After a coach wreck on their wedding night, en route to their honeymoon, the two newly weds find themselves pitched up, along with Lugosi’s Dr. Werdegast, in a fine looking mansion built on the grounds of an old fortress where Werdegast and the man who built it, architect Poelzig (played by Karloff), both served in the first war, 15 years prior. The two have a score to settle but the young couple keep them polite before Poelzig makes his play to sacrifice young Joan in a satanic ritual with his friends and add her perfectly preserved body to the ones he keeps in his cellar... along with Werdegast’s dead wife who he killed, while also having married Werdegast’s daughter. Yeah, it’s all very strange since she can only be 15 - 17 years old (as opposed to Karloff’s 47 years at the time) but the 'grudge keeping' Werdegast, who is mostly portrayed in a sympathetic and heroic way here, doesn’t find out any of this until the three of them are forced by circumstance (Joan is injured in the crash) to stay the night.

I was always blown away by the music on this thing since it was tracked in a few years later and reused for the second of the Flash Gordon serials, Flash Gordon’s Trip To Mars, including the striking title music by Heinz Roemheld. The film is a very short 65 minutes but it’s a delight, with the director making use of the wonderful house by using ample vertical lines built into the design of the interiors to contribute to some lovely  shot compositions, compartmentalising his actors in their own, allocated portion of the frame space. Later, in a satanic cult scene, he makes full use of a wonderful diagonal, double cross set of beams to further enhance his beautiful black and white photography.

Everyone does a great job here in terms of performance too, with Lugosi playing slightly off type (for him, he would soon become more associated with villanous roles) although, his heroism is somewhat compromised when his character makes good on his promise to skin Poelzig alive, which we see him doing in silhouette in a sequence which suffered many censor cuts in various countries. There’s also an interesting moment, when Werdegast’s man servant is shot, that we see blood coming out of his mouth... I’m not sure if this was the start of that particular cinematic cliché but blood was in short supply in terms of being show in movies at that time (unless it’s a pre-code thing and I’ve just not seen enough of them... certainly it's an element which was less enhanced in the various Universal classic monster movies of the time).

Poelzig, in an iconic looking role from Karloff with his big widow’s peak and stylised features (it’s this version of Karloff which was used as a caricature on the bag design for the second branch of Forbidden Planet, which opened in London in the 1980s, along with James Dean, Marilyn Monroe, Clint Eastwood, Jane Fonda, Mick Jagger, Debbie Harry, David Bowie and Robby The Robot), was partially based on a famous Austrian architect of the same name and, it would seem, partially based on the famous British satanist Aleister Crowley. Indeed, it’s been reported that this is the first film to feature the idea of satanic cults but, honestly, I don’t think so. Surely satanism must have been mentioned, at the very least, in the 1922 classic Häxan... so maybe ‘first American made movie’ might be a more accurate description.

Either way, although Poelzig as played by Karloff is certainly the more charming of the two starring roles, he’s definitely the more villanous in this one. He must be the villain because, at one point, he is seen playing Bach’s Toccata And Fugue In D Minor on a pipe organ so... he must be bad, right? Whether that choice of instrument and specific piece of music was a cliché at the time this was made is unknown to me... but it’s certainly become one over the years, for sure.

Fans of The Monkees’ amazing cinematic excursion Head will be interested to know that this is where the famous “Supernatural perhaps... baloney, perhaps not.” exchange between Lugosi and Manners takes place. The film is grim but never drags and, frankly, the use of various bits of music which would go on to become staples in the three Flash Gordon serials means that, someone like myself is always going to be tapping their toes as the film plays out anyway. So that’s me done with the 1934 version of The Black Cat, which is a film I can’t help but recommend to those who love the old, black and white horror classics. Edgar Allan Poe might disapprove of being associated with this, since the only shout out to him is Werdegast’s fear of the black cat who wanders around Poelzig’s house, but with great, stylised acting to match the great, stylised sets, good music and perverse things going on in the cellar... what more would you require?