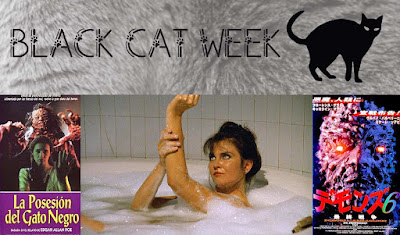 Cat Me
If You Can

Well this is a complicated mix. I’ve been wanting to see this particular version of The Black Cat for some time because, well, the great Caroline Munro is in it (her second film for Cozzi after Star Crash, which I reviewed here). However, even though she looks great in this film especially, gives a good performance and has gone on record that she has a good deal of affection for this writer/director, it’s certainly not one of her best films. I love these kinds of movies and even love Cozzi movies like Contamination but, this one is a bit of a mess, I reckon (although it’s a miracle it looks as good as it does, considering the budget Cozzi had to work with).

Okay, so I’ll start off by stating that this film has nothing to do with Edgar Allan Poe’s The Black Cat (as it proudly proclaims to the contrary on the titles on this print)... absolutely nothing and, to be honest, I don’t know why producers would want their film called that when there are so many movies out there with that title already. Apparently, the notorious Menahem Golan (formerly of Canon Films) asked Cozzi to drop some shots of black cats into the film after he’d delivered the finished product because he’d apparently already sold this film as an adaptation of the Poe story. So, I don’t know who he thinks he’s fooling but there are a few added shots of a black cat here and there and the film within a film, which is being finished by the characters at the start of the movie, is said to be a version of The Black Cat... which it also clearly isn’t, it has to be said.

What it actually is, or at least started life as, is the first crack at a third part of Dario Argento’s Three Mothers trilogy, written once again by his ex-wife and long standing writing and acting partner Daria Nicolodi (she had made large contributions to the first two and can even be seen in an early sequence of Suspiria, reviewed here). But Luigi Cozzi is good friends with Argento (I believe he even runs Argento’s shop in Italy) and, after Argento rejected the screenplay to go and do something else, Cozzi didn’t want to do something which might seem like a betrayal... so he rewrote the script so it’s an ‘homage’ to Argento’s Three Mothers movies instead although, it has to be said, homage or not, it still kinda plays out like a direct sequel, it seems to me. At this point, Nicolodi left the production and also dropped out as the lead actress/protagonist, movie star Anne Revanna... to be replaced by Florence Guérin who, actually, does a pretty good job here anyway. Although it’s hard for the actors in this to shine completely because the script is not good... at least that’s what I think.

So, anyway, Anne’s husband Marc (Urbano Barberini) and his writing partner plus his wife (Nora, played by Caroline Munro) have written a script based on the Third Mother in homage to Argento’s Suspiria (all happily referenced in the film). Once a sinister producer, Leonard Levin (played by Brett Halsey) agrees to back the film, things start going wrong and the lead actress cast in the movie, Anne, starts getting dream visitations from the real third mother... and there is loads of jumbled up murder and mayhem ensuing for the rest of the movie. There’s also a kind of cosmic element to the film and Cozzi goes on record on an extra feature on the beautiful new Severin Films Blu Ray restoration of the film, saying that it’s a sci-fi movie dressed up in horror clothing because horror was a lot easier to get green lit back in those days. To me, actually, it almost feels like a close cousin to Lucio Fulci’s Manhattan Baby and, between the two of the movies, there’s not much in it.

Nice things for me were, Caroline Munro’s sexy performance (she’s playing a bad girl here and is not what she at first seems) and the over the top goriness of some of the effects which might make you raise an amused eyebrow. For instance, a professor who is really a good witch, is gotten by the Third Mother by a psychic signal which makes her start bleeding everywhere on her head until her heart explodes and ejects itself from her shattered rib cage. It’s an obviously similar death to some of the ones in Cozzi’s Contamination and also, it's fairly evident that it’s an attempt to both recall and out-do the famous chest burster scene in Ridley Scott’s A  L  I  E  N, except, they never really look all that convincing, it has to be said. Although I do appreciate the effort and feel they have a somewhat satisfying, almost comical feel to them.

The photography and whole atmosphere of the film is nicest, though, when it’s spoofing or paying homage to Suspiria. For instance, when Ann is reading the script for the film, the lighting style is primary greens pitched against reds and, instead of Vince Tempera’s hit and miss score on the soundtrack (but not as miss as those awful needle dropped rock songs which were fashionable at the time), they actually track in Goblin’s main Suspiria theme into these shots too. Which I’m surprised they got permission for but, that’s fine.

The only other thing I’ve really got to say about this... somewhat dull and messy affair... is that there are some beautiful and arresting visual moments in the film but, they never really add up to anything more consistently substantial and so, yeah, nice to look at but it’s not a film I think I would be revisiting often. It’s a shame actually that the producers didn’t think to get Ania Pieroni back to reprise her short cameo as the Third Mother from Dario Argento’s Inferno (reviewed by me here) but, yeah, another missed opportunity, I feel. One last thing though... when Argento did finally make Mother Of Tears (aka The Third Mother) in 2007, it was much more of a successful movie (at least I think so) but it felt less like he was making a film close to the sensibilities of Suspiria and Inferno and more like he was doing a riff, in terms of style, to The Black Cat. Just a thought and I’m sure people would disagree but, that’s what it felt like to me. Mother Of Tears is still a great film though and I wish somebody would put the thing on a definitive Blu Ray edition soon. I definitely need an upgrade.