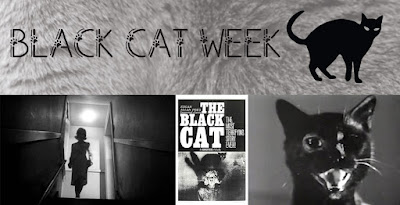 A Cat Above
The Rest

So the fourth film in Severin’s Blu Ray boxed edition of Hemisphere Horrors is somewhat unusual in that it’s not shot in the Philippines at all. It’s an American movie made by a director who only directed one other feature (under a pseudonym) and that’s a shame because, judging from this thing, he had a lot of potential. It’s yet another film called The Black Cat and also takes its inspiration from Edgar Allan Poe’s story of the same name. However, it’s a cat above the rest, if you will, in that it’s actually, apart from the period (it’s been transplanted to contemporary America), a very straight adaptation of the original tale with almost no trimmings or additions to the ideas in Poe’s text.

Which is a really hard thing to do, actually. There have been many adapations of many of Poe’s tales over the years... heck, I even read an entire book published in the early noughties that was devoted to the tidal wave of cinematic Poe adaptations called The Poe Cinema. But even the most famous ones, which I guess would be the ones that Roger Corman directed for AIP in the 1960s, have added maybe 95% of their own ‘padding’ to these, more than twice told tales. And there’s a very good reason for this... Poe’s short stories are usually very short and don’t have time to tell more than a fleeting impression of a tale or, in some cases, an abstract emotional state brought upon by an internal or external influence. If you’re trying to base a movie on one then you almost can’t help but add to it or you are going to end up with a five minute short instead of a main feature.

This film is different. It’s got an admittedly short runtime at 73 minutes but it’s really done the original story ‘straight’ and, managed to take the main germ of an idea and not really stray too much, other than in terms of slightly more visual ways of getting these same ideas across. And that’s no mean feat to actually do this and still, as in this case, make it fairly watchable and interesting.

The film starts with an opening sequence which is in terrible shape, something which Severin warn you about before the film  starts... that just a few of the shots had to be taken from inferior sources or be lost forever. It’s a silhouette of the main protagonist Lou, played by a guy called Robert Frost (no, not that one) in his only film, as he walks by a lake and his voice reads a poem. I’m assuming the poem he reads is one of Poe’s own poems but I couldn’t figure out which one it was (sorry). This, like the rest of the film, is shot in a really stark, contrasty black and white that I associate with that kind of era of American monochromatic cinema. For me, this film has the kind of feel, due to the stock and the kind of atmosphere it has, of films like Herk Hervey’s original Carnival Of Souls or Leonard Kastle’s The Honeymoon Killers. The feel of something a young Scorcese or even Cassavetes might make.

We then get a credit sequence that absolutely rocks with white type cards with images of a black cat interspersed and splitting the cards with maybe just a half a second of exposure before the next card... so the image of the cat almost goes into the retina at a subliminal level. This is accompanied by some really cool music which, alas, I’ve got no idea how to find. The film has no composer credit on it apart from a rock group performing some songs at a nightclub (technically not in Poe’s original for sure but, used as a stand in for the visual representation of abstract emotions within the text) and the disharmony between various musical choices throughout the film leads me to believe that this must have been a needle drop score culled from a music library. Scores bought by the yard, so to speak. Never mind the quality, hear the width.

These credits also tell us that The Black Cat in the film is played by Pluto. Pluto is, of course, also the name of the cat in both this film and in Poe’s rendition of the tale although, I have to say, the second cat used after Pluto’s death seems to be a totally different feline actor to me.

And the story follows the idea of a rich, playboy type who has a lot of pets and a wife who he ignores. He is presented here as unhinged and Frost does a good job of being obnoxious and also mentally unbalanced, a state of mind which kind of stands in for the peculiar mental state known by Poe and put down in his tale The Imp Of The Perverse. It certainly permeates his original The Black Cat and, frankly, a subtle concept like the mind’s own whim to follow a path of commitment it doesn’t necessarily want to undertake is probably best substituted with an unsound mental grip on reality as it is here.

As in the original story, Lou cuts out the cat’s right eye after it scratches him and begins to obsess about it (a slight inflection added by the writer/director in this version brings in the idea of a cat being a witches’ familiar as a thematic embodiment of his madness). A second scene in a night club, an establishment used earlier to highlight Lou’s frequent neglect of his wife Diana (payed by Robyn Baker in the first of only two films she made... is this movie cursed or what?), shows the live band are all now wearing eye patches on their right eyes and it’s a nice idea for a visual surrogate of the initial guilt Lou feels at his actions.

And, like the short story, Lou ends up hanging Pluto. However, unlike the random fire that follows the next day and leaves the character bankrupt and bereft and acknowledging unnatural forces at work, bringing a kind of karma to the situation... the fire is actually inadvertently caused by Lou’s act of the killing of the cat. In this version, he hangs the cat from a tree with an electrical power cord and, when the cat is hanging, plugs it into a conveniently situated socket, electrocuting the hanged feline. When he’s in bed with his wife a little later, the electricity from the murder of his pet gets out of hand and starts the fire which leads to his financial ruin.

Before he finds another cat as a replacement for Pluto, there is a sequence where Lou is hospitalised for his increasingly aggressive mental condition and it’s revealed he is having shock treatment and insulin injections. There is a scene where Lou is injected with an obviously painful chemical as he writhes and thrashes on the bed and I can only assume that this is a zealous writer/director using this as another, stronger visual metaphor for the guilt that Lou is suffering from his own, nasty actions. It’s a tough call because, in Poe’s tale it’s written in the first person so the audience is not at a distance from the character and can, therefore, feel a little sympathy from the writer in the situation. In this cinematic version, however, it’s hard to call upon any sympathy for the male lead (who nevertheless does a terrific job and, again, I’m surprised this guy never worked again in the business... at least not under the name Robert Frost).

The film continues to follow Poe’s short description of the character’s downfall when, after going after the second cat in the basement, he (not accidentally in this version) splits his wife’s head open with an axe and then walls her up in the basement. Now, this is impressively done here and the stark black and white photography really helps with the impact of the blood as, in a quick cut from motion to aftermath, we see the axe head buried in Robyn Baker’s skull and blood spurting from the wound to splash the wall and, in another aftermath shot with less motion, its path down her face and clothes. It’s a skillfully timed and edited series of shots and I imagine it must have been quite strong stuff for its day. A similarly strong aftermath shot comes earlier in the film, where we see Lou’s blood coated hand with the cats eye sitting in the centre of his palm.

When the FBI come knocking at his door, the story plays out the same as the source and, when he bangs on his new wall to proudly demonstrate to the inspectors how solid his house is, we hear the sound of the wailing cat which he has accidentally walled in with the corpse of his wife and the two FBI men tear down he wall so we are treated to a shot of the cat jumping out to freedom from the top of the wife’s bloody head. One of the few additions to the original tale, which is now over and which, in a way contradicts the existence of the opening poetry shot, is where Lou tries to escape in his car and the two officers give chase. However, at the last minute (as you kind of know is going to happen), Lou swerves when he sees the black cat in the road and crashes his car in a quite violent piece of editing which really makes the crash feel more than it is (I think a toy car was probably used for one of the rapidly edited together shots). Our last shot of Lou is of his mangled and dead body where, we see, his right eye has also been knocked out from the crash.

The Black Cat is low budget and feels like one of those movies where the director was struggling against finances at every turn but still gave it his all and managed to make, well... a really interesting film for sure, if nothing else. If you are a fan of Poe’s tale then this rendition of it is definitely worth checking out because I’m convinced it’s one of the straightest adaptations of a Poe work in existence. I’m really grateful to Severin for putting this one out there as part of their Hemisphere Horrors box because there’s probably no way I would have bothered to pick this one up as a single edition and I would have missed out. Highly recommended for a certain kind of low key horror aficionado, I think.