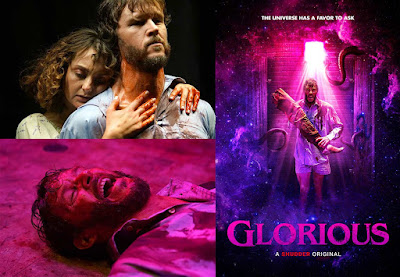 Warning: Very slight spoilers through the round hole.

I have to be honest here. The only reason I decided to watch Glorious is because it’s directed by Dr. Rebekah McKendry who, with Elric Kaine, comprises one half of the podcast team for All The Colours Of The Dark, which is one of those shows which helped make things a little more bearable for me during home office sessions throughout the pandemic (that and their former incarnation of the show Shockwaves). I always find it a fun show and I was curious to see what McKendry is like as a director. The answer to that is... pretty darned awesome, it has to be said.

The story, such as it is, tells of Wes, played by Ryan Kwanten, who is on the road after a bad break up with his girlfriend (played by Sylvia Grace Crim in some flashback/memory reconstruction scenes). After spending a night of self torment parked outside the Route 37 Rest Area (is that a Kevin Smith reference there?), Wes goes to use said rest room. It’s literally just one of those bathrooms with, if you’re lucky, a vending machine attached to it... which you sometimes see on our motorways over here in the UK, too. A poor excuse for anything anyone would call a ‘service station’, for sure.

Anyway, Wes goes in to throw up and, through what is essentially a glory hole in the side of the stall (if you’re going to Google that term, just go into that knowing that it’s NSFW), with an elabourate painting of a Cthulhu-like God around it, he begins to hear the voice of an actual, ancient God talking to him and trying to engage him in conversation. And the rest of the film is almost extensively set in the rest room (hey, low budget is great when you can do it right, as here) and is, for the most part, a two hander between Wes and the mostly unseen God in the toilet stall, as voiced by the always brilliant J. K. Simmons.

And it really works. It’s well written and, thankfully, well performed by the two actors (Simmons comes off at points almost like a very polite, ‘ancient wisdom’ version of HAL 9000 from 2001 A Space Odyssey... and I mean that in a good way). Backing these two performances up is the direction and staging which, considering it’s obviously going to have a naturally claustrophobic feeling to this kind of environment, is surprisingly well handled... to the point where it never, ever gets dull (which is a big  plus).

McKendry uses lots of camera movement, coloured lighting and just enough ‘outside influences’ to keep things interesting while allowing the actors to exist in this film world without ever once losing a sense of credibility, or a sense what is very demonstrably at stake in the scheme of things... I won’t say much about it but, the future of all life in the universe hinges on how the conversation and a certain ‘favour’ asked of Wes plays out.

Yep, McKendry and co pour on the jokes here and, again without spoiling it, there are some nice moments where the edit between two shots of Wes using a urinal and the toilet stall home of the God in question make for some hilarious viewing moments, with a repeat structure joke. And I can’t think of any other film right now where I would be as likely to encounter lines such as “You thought your human penis was going to save the universe?” There are also, as expected, a fair few nods to horror movies over the years, many of which I probably missed but, even to the extent of a quick practical effect at some point mimicking a 1989 film (not one of my favourites, it has to be said... I won’t reveal the film here for obvious reasons).

And before I finish up on this short review, since I always shout it out on the very rare occasions it happens (as regular readers will know)... there’s a slight twist reveal near to the end which I totally didn’t see coming. Unlike many other modern film makers, McKendry doesn’t telegraph her rug pulls by giving away too much stuff to prep the audience. Like I said, it’s extremely rare anyone fools me with this stuff but there’s a sequence where the contents of one of those ‘shoe box’ looking DIY cardboard boxes of the style you can buy at stationery stores and places like IKEA is revealed and, with it, twists the way the audience are perceiving the entire situation. It’s a nice reveal (especially for a director who obviously has an affinity with certain horror tropes) and I was fully appreciative of not figuring it out before hand. So she gets a big round of applause from me on that count too.

And, yeah, that’s me done with Glorious... other than a quick shout out to some nice sound design (which also even adds to the humour of some of the jokes relying on the edit in one particular scene). If you’re into low budget, quirky horror movies with a nice line in dialogue and some acting which can put that stuff over in a gripping way, which is actually done quite well without spilling its secrets too quickly... one which you may find yourself laughing with a fair bit... then this one is definitely worth a look, for sure.