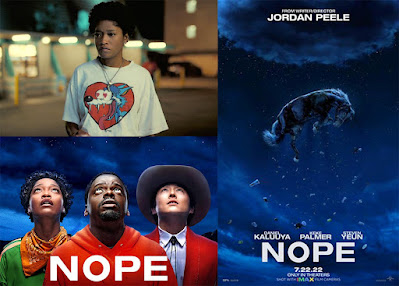 Regular readers of my blog may remember that I’ve not been that impressed with the cinematic CV of Jordan Peel so far, at least in terms of his big hit Get Out (reviewed here) and his admittedly better follow up movie Us (reviewed here). It has to be said that both movies I mentioned here are very well put together and have some great performances in them... they just didn’t happen to do much for me, for the most part (although I thought the music in Us was pretty good). With Nope, well, since UFOs and aliens are something of a trigger for me, I was kinda hoping to say that I’ve finally seen a Jordan Peel movie that I really liked but... nope.

That being said, it’s quite entertaining, telling the story of a family of Hollywood ranchers, brother and sister, who fall on hard times after their father is killed by falling debris, his head penetrated by a falling coin near the start of the movie. The surviving family are brother and sister OJ (who tends to wear orange clothing throughout the film... like Orange Juice I guess), played by the always watchable Daniel Kaluuya and his sister Emerald (more often than not dressed in green), played by Keke Palmer. The family are said to be descended from the jockey who rode a horse photographed by Muybridge, doing his thing to study movement (and to win a bet), way back when.

Also thrown into the mix are the successful proprietor of a nearby ranch called Jupe (played by Steven Yeun), a local electronics store employee called Angel (played by Brandon Perea) and an old school Hollywood director of photography called Antlers Holst (played by Michael Wincott) who, armed with his hand cranked camera, fulfils an important plot point at a certain part of the film. The story involves a UFO or, something like it, which has been ‘stealing’ horses on the ranch. One of the things I did like about the main characters is, instead of them trying to work out how to make contact or react in awe and wonder etc, they just want to be the first to properly photograph it so that they can gain money and fame from getting a clean shot of the thing. The stakes are upped once they know just what they are dealing with, following a certain event which takes place just under an hour from the end of the movie.

And, yeah, like Peel’s other movies, it’s well shot, flows together nicely, has some great performances but, for me, it just didn’t feel that engaging (although I loved the old Hollywood stuff and the parody old style cowboy music used for some sections). One of the problems for me, though, was with certain story points. The film makes a point about building up Jupe’s character for instance, with a real humdinger of a back story from when he was the child star of a hit TV show as a kid. But, although there may have been some metaphor involved in its inclusion, I couldn’t really make out why we were delving into his back story, especially when it’s made clear (again, just under an hour before the end of the story) that his character isn’t as significant as we once thought. I just couldn’t see the point of it. Now, I’m no fan of the Chekhov’s Gun principle of writing, where everything has to mean something or connect the dots but, I did feel that since we were asked to observe the background of an incident involving this character multiple times and fairly in depth, that it might have had more of an impact on the story, maybe?

Also, the threat which the main protagonists are facing and the way in which they try to deal with it... didn’t make a heck of a lot of sense to me. I’m guessing you need to know more about how to tame a horse or break it in (trying not to give too much away here) but, yeah, I didn’t really know what was going on after a certain point, it has to be said.

But, I did have a certain amount of fun with it and I certainly found the film somewhat interesting and entertaining so, yeah, it kept me quiet for a couple of hours, I guess. Nope was a minor movie for me and certainly not Peel’s best of the few I’ve seen but it is quite watchable and I’m sure some people will love it. Not my cup of tea but I’m still looking forward to the day when Jordan Peel manages to totally blow me away. He’s bound to do this at some point, surely... I live in hope, not nope.