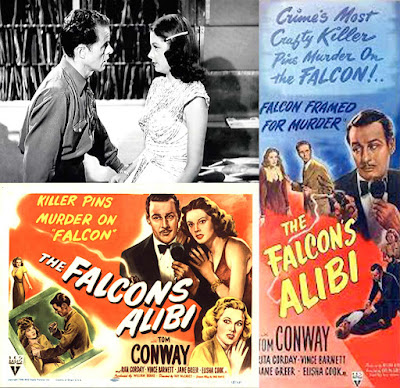 Warning: All the spoilers.

Well there you go. I never knew director Leo McCarey had family in the business but here he is, younger brother Ray, directing the 12th in the series of films based loosely on the character of The Falcon, namely The Falcon’s Alibi.

This one starts at a race track again, just like The Falcon In Hollywood (reviewed here) did but, this one introduces us to a lot of the main cast, aka suspects, during the race track scenes. Then it’s back to a hotel where The Falcon is trying to help a young lady played by Joan Meredith, who has purchased a fake set of jewels so the real, priceless jewels will not disappear if they get stolen, who is in trouble. Because, after a while, both sets are stolen... one of many thefts in a hotel where The Falcon, Tom Lawrence, once again played by Tom Conway, has to solve the mystery, try to work out why people are getting bumped off and come up with an alibi for himself (an alibi who winds up as another corpse and reverting us to the old dynamic of the police suspecting The Falcon of pretty much everything). He also has to foil a bunch of scammers who are claiming insurance for the thefts.

And, there’s not too much mystery in this one, it has to be said. Although this entry in the series has a bona fide superstar in it... co-starring as a DJ who is secretly married to another character, we have the great Elisha Cook Jr playing someone who you suspect right away is behind the killings and the robberies. As soon as I saw the DJ set up I was like... okay, so he puts a recording of his voice on the radio so he can leave the office and steal the various trinkets. And of course he does but, to the credit of the writers, they reveal it straight away and then, when the person defrauding the insurance company in collaboration is revealed to be the husband and wife getting their jewels stolen... well, like I said, it’s pretty obvious what’s going on here, despite a few minor plot twists which don’t exactly throw anyone off the trail.

And it’s a fine romp as these things always are. The police inspector and his sidekick are a new pair again and we have yet another guy, Vince Barnett, having a crack at playing The Falcon’s assistant Goldie Locke. Well, he’s passable but he seems less broadly comic and just a bit too understated to really shine in the role, it has to be said. All the actors are fine, though, especially Conway who really is very good in the role and, of course, the remarkable Elisha Cook Jr, who seems fine at first but then gets that weaselly look in his eyes and get a bit obsessive and disturbed as the film wears on (as you would expect from him in these roles at the time).

Not too much more to say about this one but one of the things I did note is that the score was kinda interesting on this one. The usual Falcon fanfare or signature tune is played at the front end of the movie, as it had been on a fair few of these by now and, as usual the music director is credited as C. Bakaleinikoff. However, this seemed a lot more interesting and there’s some wonderful, very low key timpani towards the end of the movie, when The Falcon is sneaking around various hotel rooms, where the drumbeats replay the opening jingle like bass drum notes. Very effective and it reminded me of some of the things John Barry used to do in his early James Bond scores. So I looked it up and it turns out the score for this film, uncredited and in only his third outing as a composer, was by Ernest Gold, who went on to score such famous films as Exodus, Cross Of Iron and, of course, It’s A Mad, Mad, Mad, Mad World. And, yeah, he does a really good job here, it has to be said.

And that’s me done with this one. The Falcon’s Alibi is a fine, short but sweet entry in the series and Tom Conway would have just one more crack at the character, which I’ll get to as soon as I can.