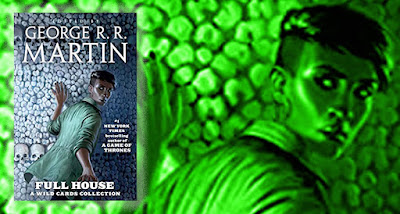 Proclaiming itself a Wild Cards mosaic novel on the first printed page of the book, this 30th new collection of short stories in the Wild Cards series, Full House, isn’t really that at all. Sure it consists of new stories by a variety of the Wild Cards writers but, unlike the majority of the multi-authored previous volumes in the series, these aren’t all going towards making up an overreaching story arc. Instead, this is a collection of stories previously published on Tor’s website... which is fine by me, I don’t really have time for electronic PDFs or Epubs of fiction when there are so many good printed stories to be read... hence, I haven’t read any of these before, myself.

But the point is, these don’t go together so well and, yeah, I’ll hit you with my one negative comment at the end but, if you are a Wild Cards fan... lapping up these tales taking place in an alternate Earth history where a virus from an alien world was unleashed in the 1940s, which either leaves people as they are, turns them into hideously deformed Jokers, kills them or gives them Ace powers (basically gives them super powers)... then you are going to love this one.

As usual, all of the stories in this tome are amazingly well written and, if you’re anything like me, you’ll probably be absolutely into all the characters... old and brand new alike. These are skilled writers giving us fantastic prose set in a version of Earth where literally anything can happen... these books are like addictive drugs, they’re so good. Here’s a very brief rundown of what’s in this new edition of the stories... I’m not going to go into detail on each one because, frankly, they’re all absolutely brilliant.

When We Were Heroes by Daniel Abraham
This one has former American Hero contestant Bugsy, moved on since the various big international conflicts he’s been involved with since the first season of that reality show, now working as a ‘reporter’ on Aces magazine, a gossip rag of some notoriety. He is on the sharp end of an angry Curveball, after she finds out about a shot he uses of her combined with an Ace celebrity piece he puts out, catching her on a first date. The conversation they have crosscuts between a recent, tragic event in Bugsy’s life where he was working security for an organisation and the awkwardness and romance of Curveball’s first date with a Nat (Nats or naturals are people who haven’t been affected by the virus... yet).

Evernight by Victor Milan
This one’s a fairly dark tale featuring Candace Sessou aka The Darkness, as she tries to free her terrorist brother from captivity in a Joker sanctuary beneath the catacombs of Paris, by doing a job for those who run the place in exchange for his release. Things go wrong all over.

Lies My Mother Told Me by Caroline Spector
This one sees Bubbles and her adopted, insect-like daughter Adesina attacked by zombies on a carnival float. However, it’s not Bubbles former lesbian lover and friend Hoodoo Mama who is responsible for the zombie disruption and deaths. Someone sole Mama’s power temporarily to specifically put pressure on Bubbles through her friends. Between the two of them, the ladies fight back and neutralise the threat... as far as we know... in the usual deadly manner.

Nuestra Señora de la Esperanza by Carrie Vaughn
Earth Witch, still mending from a bullet wound she received in one of the big international battles told in the novels, is wracked with guilt for killing so many enemy soldiers and then finds out that, somewhere in Mexico, her grandmother is still alive. Finding the advice of the local priest completely unsympathetic to the plight of those touched by the virus, she takes a road trip to go and find her grandmother for some advice on the matter... one Ace to another. A background detail... Curveball seems to still be in a relationship with John Fortune, son of the first wave Ace Fortunato, in this. Which kinda contradicts the first story in the volume... I’ll get to that soon.

Discards by David D. Levine
This one is by David D. Levine who wrote the wonderful Arabella of Mars novels (which I reviewed here, here and here). This one tells of a new Joker/Ace when his card turns, transforming him into someone who can attract certain kinds of junk and debris to overcome his obstacles. Now, I think Levine has been involved in the Wild Cards novels before on a number of occasions but this is the first time I’ve consciously noticed that this is the same guy who created Arabella. The writing style is totally different here to those aforementioned tomes and shows what a great, diverse talent this writer is... but the same can be said for all the Wild Cards writers, I’m sure.

The Elephant In The Room by Paul Cornell
This one’s a nice little sketch of Abigail, who picks up passing Ace and Joker powers (I think her first appearance was in the Wild Cards novel Fort Freak, reviewed here). She’s also the current girlfriend of the original, multigenerational, ageless Ace... Croyd ‘The Sleeper’ Crenson. But when Croyd is coming to the end of his current waking cycle and desperate to stay awake via whatever amphetamines or alternatives he can find, becoming his usual cranky self... Abigail’s mum comes for a visit.

When The Devil Drives by Melinda M. Snodgrass
Star Trek writer extraordinaire Melinda M. Snodgrass is one of the old and constant guard of the Wild Cards universe (and sometimes shares the editing credit with George R. R. Martin). This is another tale of assassin Noel Matthews, former teleporting assassin for the Order Of The Silver Helix and his various male and female incarnations. In this one, pursuing a somewhat ‘straight’ life, he is framed for a murder he didn’t commit and, in chasing down the real culprit, finds himself trying to fix his own family, from whom he has retreated.

The Atonement Tango by Stephen Leigh
This one headlines Drummer Boy, everyone’s favourite Joker/Ace musician. However, when a Joker Plague concert is bombed and all but one of his group and himself survive, with life changing injuries, he needs to investigate just what crackpot let the bomb off and come to terms with some home truths. This one features another cameo by Croyd Crenson and also the centaur Dr. Bradley Finn, who is looking after DB’s wounds. There’s also a mention of Jube, the walrus newspaper vendor and I love that people still assume that Jube is just another Joker, rather than an alien visitor from the old days of the early books in the series.

Prompt. Professional. Pop! by Walter Jon Williams
Irritating, self important, teleporting Ace Cleopatra is leading a life of crime but an intervention by original 1940s Ace Jack Braun, aka Golden Boy (who also doesn’t age and has been both a hero and a villain... due to his turning evidence in 1950s McCarthy hearings on ‘hidden virus citizens’ back in the 1950s) helps land her in more trouble pursuing fame and money.

How to move Spheres and influence people by Marko Kloos
This one is another story of a new Ace. When disabled 15 year old TK’s card turns on the last week or two before her summer holiday from the expensive school she is enrolled at, she eventually becomes a hero when she is trying to have a holiday in Edinburgh with her folks. She is expelled from school for her heroism but she is also approached by The Committee On Extraordinary Interventions, who are helpful and let her know she can go and work for them when she turns 18, if she wants to.
TK’s Ace ability is she can manipulate any spherical object with her mind... which obviously makes her very dangerous but, I won’t tell you her Ace name because the writer holds that back as a little reveal at the end of the story.

And that’s me done with Wild Cards Full House. My one disappointment is that the stories aren’t presented in chronological order, so there are lots of contradictions from story to story as various Aces are mentioned as doing different things at different stages of their lives (even though the stories are all about the more modern of the Wild Cards heroes... within the last ten years). So you do have to kind of ignore the seeming contradictions as you go on this one. But, other than that, another absolutely fantastic ride and I can’t wait for the next volume, which is due out next year. I love these books and have been reading them since the first tome appeared in the 1980s. Great stuff.