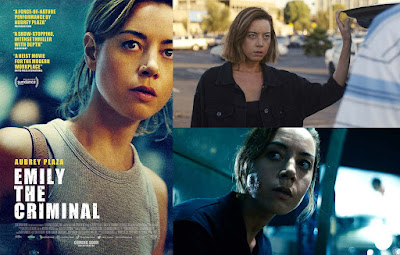 Okay, this one’s going to be a fairly short review, I think... but hopefully a sweet one. I’ve only seen three movies with Aubrey Plaza before this one, which played as part of this year’s London Film Festival... Scott Pilgrim Versus The World (which I honestly don’t remember her being in... I need to take another look at that one, I guess... reviewed here), Ned Rifle (by the great Hal Hartley, playing a key character mentioned in the first film of his Henry Fool trilogy but who we finally get to see in that third installment, reviewed here) and Ingrid Goes West (reviewed here). So, yeah, I don’t know her from much but she’s pretty amazing. Not just in terms of being a great actress with a real grasp of comedy but also because she has a wonderfully expressive face that sticks in the mind. So, if she’s involved in a film project and I’m actually fortunate to see it advertised, I’ll gravitate to it at some point.

Her newish film where she plays the title role, Emily The Criminal, is not a comic movie in the slightest... but she’s still knocking it out of the park with this one. Here, Aubrey plays the titular Emily, trapped in a system whereby she can’t get out of debt for her student loan and with a prior conviction for aggravated assault involving an ex-boyfriend, which makes it very difficult for her to get anything more than a very basic food delivery job. So, sunk in poverty, a colleague does her a favour by giving her a number and she becomes a ‘dummy shopper’. I’d not heard of the term before but basically she gets involved in a small gang working a credit card fraud racket, where she and a few others buy expensive goods on newly forged credit cards with stolen information and then bring it back to the guy running the operation, for a small amount of cash but which is quite a lot compared to what she’s normally earning. The first job gets her $200 and then the second, bigger job, gets her $2000... and so it goes.

Now, the guy running this particular scam, along with his brother, is called Youcef played, again quite brilliantly, by Theo Rossi. Emily and Youcef bond and then, before they end up romantically involved, just to complicate things... Youcef shows her how to run her own credit card scam. Shenanigans occur and things get tough and fairly gritty. As I said, this is Plaza playing it totally straight and also playing a very interesting character who, whenever she’s put in a position where she’s vulnerable, overcomes her fears on the turn of a dime and confronts them... whether that’s armed with a pepper spray, a taser or even a Stanley knife.

And that’s as much as I’m saying about the plot but, the film is fraught with peril (to quote a Scorcese character) and the writer/director really pours on the suspense by using lots of handheld camera during a lot of the sequences, which both gives it a kind of fly on the wall, voyeuristic, documentary feel but also indicates the chaos of Emily’s world and kind of, at least I thought, gives us a metaphorical glimpse of that character’s inner turmoil.

It’s also a film which mixes and matches tonal shifts from the odd, beautiful moments of life to the really horrendous parts... but, because of the chaotic style imparted by the way the movie is shot and edited... it really gets away with mixing all those clashing moods together quite smartly. Which in itself adds layers to the emotional complexity of the piece. This is a very simple set up and follow through, not complicated in any way, so the building tensions are created by both the fantastic performances (which I’m definitely used to from Plaza) and the way in which the footage is presented.

And that’s really me done on this one already... I did say it was going to be a short one this time. Emily The Criminal is suspenseful, down to Earth and finishes at a place which just wouldn’t have been allowed as a story outcome in a film released, say, sixty years ago, for sure. And the fact that you somehow sympathise mainly with a character who, perhaps, doesn’t make the best or most moral choices but shows a steely determination to get to where she needs to be, puts you in a position to accept the ending of the movie a little better. So, yeah... Plaza, Rossi and John Patton Ford all do a great job here and this is one I’ll definitely recommend to people, for sure.