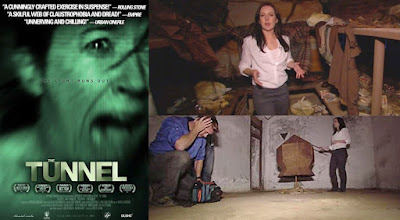 The Tunnel was one of those ‘postage ballast’ movies I bought. By that, I mean, it’s one of those films you find for less than £2 on Amazon to make up their bizarre £20 limit so you qualify for free postage. I mean, rather than pay a couple of quid just for stupid shipping, might as well make that cash work for you, right? So I have a number of movies in my wish list on Amazon which I like the look off, which only cost a very small amount, for just such occasions when they arise and... this was one of them.

It’s a ‘found footage’ style horror film about a news reporter called Natasha (played by Bel Deliá) and her reluctant colleagues Peter (Andy Rodoreda), their cameraman Steve (Steve Davis) and their sound guy Tangles (Luke Arnold). She is investigating a story about a labyrinth of tunnels under Sydney that the government had planned to use to recycle water but then, suddenly changed their minds. Homeless people who were said to have been sleeping there had gone missing, all denied by a government that refuses to talk about the situation, declining access to the tunnels to anyone. So, of course, our intrepid heroes go into the tunnels to make a report and try and find out what the truth of the situation is for their news network.

The film starts off in a possibly clichéd way (nowadays) with a sound recording and transcript of two of the characters calling the emergency services in a huge amount of distress and then, much to my annoyance at first, goes into a standard credits sequence with music playing in the background. It then continues with interview footage of two of the ‘survivors’ of the story talking to the camera, intercut with the footage from their two camera sources as they set up the background info and then proceed into the tunnels, breaking into an alternative entrance after the people at the train station above refuse them access. And, yes, there is an underscore on the footage so... okay, it has the trappings of an ‘impartial’ documentary and the scoring is quite effective but, I kinda wish they hadn’t gone that route.

Near the start of the movie the characters set up certain things to excuse some of the ‘logic impairment’ moments you get with most found footage style movies. So, due to the cameraman not trusting Natasha, he says he decided he would film everything from when they broke into the tunnels, just to cover himself and absolve responsibility as future evidence if it came to it. I still think it’s unlikely, after what happens later... and you know just the kinds of things which are going to happen, of course... that they would still be worrying about recording themselves but, hey, they at least make a stab at it here. There’s even a demonstration that one of the cameras is waterproof so, yeah, you know just where that camera is going later on.

Another thing which was a little problematic for me... and I really tried not to compare it to this film but... it does feel like it’s been influenced by The Blair Witch Project to some extent. For example the use of two different camera sources with two distinct looks to them so you can tell them apart and, also, the female lead being perceived as responsible for everyone’s troubles. There’s even a moment, like in the former film, where she has her own camera turned on her as she is verbally pummelled into taking some responsibility for her actions.

Like a few of the newer found footage movies these days, the film uses other visual sources too, asides from the interview excerpts which cut in between certain scenes. So you’ll get surveillance camera footage also edited into the ‘documentary’ at certain points.

Now, it has to be said, I am making the derivative nature of the film sound like a negative but, in fact, I actually had a good time with this. A couple of the jump scares worked well and the tension is almost unbearable in some places so, yeah, I do have criticisms but, all in all I’d say this is a pretty good entry into the ‘found footage/docu horror’ genre and fans of those will surely get a kick out of the movie. I wasn’t too sure about the ‘almost exploitation’ moment when they actually found an excuse for Natasha to take her top off at one point... much as I like that kind of thing it felt really out of place here. All in all, though, I rather liked this one and would be interested in seeing what this director got up to next. The Tunnel may not be the best of the sub-genre but it’s certainly well put together and I was pleased to see this one. Definitely worth a look.