Doctor Who - The Power Of The Doctor 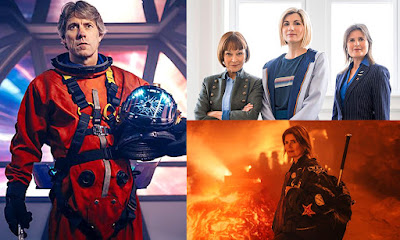 Doctor Who
The Power Of The Doctor
Airdate: 23rd October 2022
BBC 1

Warning: All the spoilers.

Well this one was a bit hit and miss.

I’ll start off by saying I quite enjoyed the new Doctor Who special The Power Of The Doctor (more so than anyone else in the house, that’s for sure) and thought it was fast paced and fairly entertaining for a feature length episode of the series. I don’t think it was too hard to understand in terms of story... some people seem a bit stumped by it. I think a lot of the stuff which people are asking questions about at the moment are dead ends rather than loose ends in the plot... they weren’t supposed to be that clever and you should just take things like the ‘significance’ of the missing paintings (there isn’t much, it would seem) at face value.

Now, a friend of mine told me today, an hour or so before I watched it, that none of the dangling plot ends everything has been building up to get resolved or answered in any way. And I found that hard to believe but, it’s true. Following on from the overreaching story arc from a couple of seasons ago... we still don’t know much about the Timeless Child and why The Master went a bit mad and burned down Gallifrey, it seems to me. Hints and clues were pointing to the fact that maybe The Master was just a different life-cycle identity of The Doctor, memory blocked versions of each other but... I guess we’ll never know now. That part of the story seems to have been forgotten and, I suspect, be dropped completely from future stories (as many unanswered plot threads have been over the last ten or more years of the show).

Similarly... the pregnant mother reunited with the father of her child from Flux was somehow highlighted in a way that made me assume we’d find out the child inside her womb was The Doctor (and by extension, The Master, if my theory was correct) but, yeah, even though her other half is present in this adventure, it’s not even mentioned. So... no, none of it really tied up anything, it has to be said and, the emotional sub plot of the ‘burgeoning romance’ of The Doctor (played brilliantly again by Jodie Whittaker) and Yas (played wonderfully by Mandip Gill) wasn’t even tackled at all.

But the story, such as it was, kept moving a pace and never really got boring... so there’s that.

There were some nice, if corny shout back jokes such as the Master/Doctor forced regeneration incarnation wearing Sylvester McCoy’s jumper (still got mine), Peter Davison’s stick of celery, Tom Baker’s scarf and playing Patrick Troughton’s recorder. And... well... The Master Dalek Plan anyone? Long term watchers of the show like myself may have chuckled lightly at that one, I guess (yeah, okay, so maybe I did, briefly).

And there were some nice surprises in it too. I mean, we knew from the trailers that Janet Fielding was back as fourth/fifth Doctor companion Tegan Jovanka and seventh Doctor companion Sophie Aldred was back as Ace and... they did very nicely back in their respective roles, for sure. It was great seeing them again. But there were more surprises too. John Bishop’s companion Dan’s quick exit from the show early on was unexpected, for sure. And... not so much surprises... were the return of David Bradley as the first Doctor (reprising his recreated role of William Hartnell’s original take on the Timelord), Peter Davison as the fifth Doctor, Colin Baker as the sixth Doctor, Sylvester McCoy as the seventh Doctor and Paul McGann as the eighth Doctor. Now, I know why they were all showing their age... but that wouldn’t happen to the Doctor since he doesn’t age, he regenerates. I was surprised they didn’t CGI them as younger versions of themselves, since they were a kind of post-regeneration guardian/illusion (take your pick).

The one thing which didn’t surprise me, however, was who Jodie Whittaker regenerated into at the end of the episode. We’ve been hearing David Tennant would be returning to the role in some capacity and a few weeks ago I said to at least one friend that I didn’t think Jodie would be regenerating into the new Doctor just yet. Either she would perish off screen or possibly regenerate back into Tennant and, well, at least one of those two theories was proven right I guess. So, yeah, we have a very bemused Doctor at the end of the story, wondering just why she has changed back into the tenth Doctor (or eleventh if you rightly count The War Doctor as number ten). Even so, just because I was expecting it, I wasn’t disappointed by it... it was kind of what I was hoping for, to be honest.

Another big surprise is that the episode didn’t look dirt cheap. The effects work was quite good with some interesting shots and visual compositions. The acting from everyone was superb. Yeah, the script was weak and perhaps Sacha Dhawan’s version of The Master was a little over the top and irritating but, that’s fine, he’s the villain. He’s supposed to be irritating. But Jodie really shone in the role again and I was grateful that she went out in a blaze of glory, so to speak.

That being said, I did find one shot in the thing very strange. When Yas picks up The Doctor’s damaged body, we get a quick shot of the ground where she had fallen. Well... there seems to be nothing extraordinary about the ground and my guess is it was originally supposed to have shown some CGI blood there, to show audiences the seriousness of The Doctor’s wounds. Instead, perhaps it was deemed there would be no pool of blood in a family show and so the blood was either removed or not added. I’m just guessing here but, either way, it seems strange to have a shot covering a small area of ground for a second or two, for sure.

Another thing that niggled was...  if The Master inhabiting the body of The Doctor transplanted his personality and attitude into The Doctor, instead of triggering a new personality, then does that mean that the forced regeneration from the second to the third Doctor at the end of The War Games also meant The Doctor’s personality was erased or sublimated? I wish the writers, especially when they are the show runners, would be more careful when it comes to putting new angles on Timelord history, to be honest.

And that’s me pretty much done with The Power Of The Doctor. It’s not the best swan song for an incarnation of The Doctor but it’s not the worst either. Overall, I really hated the Chibnall era of Doctor Who (but loved Jodie Whittaker in the role) and, although the scripts were better, I didn’t have much love for the Moffat era either. I really enjoyed the Russel T. Davies era on the show but, now that he’s come back and hinted at what the future has in store for the character, I can’t say I’m looking forward to his return either, if I’m being honest. In fact, I suspect that he’s only been brought back to stabilise the show and I reckon if he hadn’t taken the job to come back and rescue it, the show might have been cancelled at the end of Chibnall’s run. Still, as ever, we shall see what we shall see when The Doctor returns for his sixtieth anniversary show in November of 2023. Until then, I shall be slowly working my way through those Blu Ray legacy sets so... plenty more classic Doctor Who reviews will be going up before then.