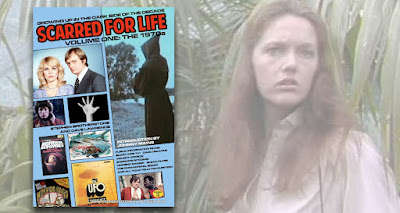 Subtitled Growing Up In The Dark Side Of The Decade... as it is, Scarred For Life Volume One: The 1970s is a fun, fond and infectious look at a lot of the really dark stuff which was either aimed at or consumed by kids growing up in that turbulent decade. Stuff which various companies and manufacturers just wouldn’t get away with in these days of bizarrely woke tolerances and youngsters who are, as one of the writers comments, wrapped in cotton wool. For anyone who was lucky to grow up in this decade (I was born in 1968 so am certainly able to appreciate most of the stuff covered by this tome), it’s a real rush of nostalgia accompanied by, in some cases (and certainly in terms of at least one of the authors of this tome... who seemed to me perhaps a little over sensitive as a child, perhaps), a few nightmarish moments that some of us would maybe like to not have wrenched back into the light of day after our defensive minds had promptly buried them away.

At 740 pages of text that must be set in something less than an 8pt font, it’s certainly value for money. I do have a few design issues with the volume and, I’ll surely bring those up later (not my job to sugar coat some of the obvious problems) but, in all honesty, those niggles with the text pale into insignificance when faced with the absolute brilliance of the majority of the content and, as importantly for a book like this, the fantastic, conversational writing style employed to talk about these subjects here.

So what does the book cover? Well everything and anything about seventies culture and it’s a diverse bag. Following a guest introduction, we have a prologue looking at the 1960s, attempting to explain how that decade ushered in the attitudes and values of the 1970s. Then the book is split into various topics, all split into further subsections of specific sections dealing with examples of these. For instance, the first 300 plus pages are devoted to TV shows and, like everything else in the book, this will bring back a lot of memories for some and, in my case, even prove somewhat enlightening as to the whole ‘did I really see that or did my worst nightmare make it up’ nature of some of the dark delights on offer... aka forced down the throat... of kids in that particular decade.

So all the usual suspects you might expect in a tome of this nature are present and correct... stuff like Sapphire And Steel, The Omega Factor, The Stone Tapes, Quatermass IV, Love Thy Neighbour, The Black And White Minstrel Show, The Tomorrow People, Horror Top Trumps, Public Information Films (including the absolutely brilliant Charley Says... amongst many traumatic ones), Guy N Smith novels, the Haunted House board game (watch out for that bloody Whammy Ball), British comics like Action, 2000AD & Starlord, sweets, crisps and ice cream such as Bones, Fangs, the Dracula Ice Lolly (which had red jelly as a surrogate for blood when you bit into it, remember?) and even the nation’s obsession with all things paranormal such as UFOs, alien encounters, ghosts, spoon benders and that whole Erich Von Däniken thing.

There’s also a lot of stuff I wasn’t expecting to remember such as a fake documentary show which I’d forgotten had put the absolute wind up me called Alternative 3, the cliffhanger ending of an episode of Armchair Theatre (which introduced sleuth Jemima Shore to the Black Nun) and Fumunchews. And this barely covers it, folks! This is a hefty tome crammed full of text and a few pictures to illustrate the majority of the sections. Like I said, you get a lot of bang for your buck here.

For me, it was two TV shows that are now identified and which have stayed with me all these years, that made reading this thing worthwhile. I’ve already forgotten the first again but it’s not a show I need to revisit... but I remembered it features a time travelling ghost story where a German sniper’s bullet nearly put paid to one of the kids, pulled out of the way just in time for it to once again penetrate the grandfather clock at the time it’s been stuck at all these years since. It was nice somebody else remembered that one. But the big one for me was a piece of television that really made me sit up and pause in the most horrible way... and you have to remember this was a kids show. It was a certain incident that took place in what was one of my favourite shows at the time, The Tomorrow People. I remember this happening and, even now that I have watched the moment again on You Tube after having the episode title correctly identified for me here, I still can’t believe they let this happen, in all its gory detail, on a kids show broadcast around late afternoon, just after school had finished.

The moment in question was where a young teenage girl, who had budding psychokinetic and telepathic powers (like all the titular people of tomorrow) dies in a most horrible way... she has had a time bomb implanted into her head and as the lead kid tries to save her, she realises it’s too late, throws him to the ground and jumps out through the glass of a window in a hospital, a couple of stories up. By which point the time bomb in her head has been triggered and we see her burst into flame on the way down, basically exploding right in front of all our ‘young kiddies’ eyes. It was one of two moments which really stayed with me as a kid (the other being the climactic death scene in Bonnie And Clyde). So I’m very grateful for this volume for reintroducing me to this horrifying moment so I know I didn’t make it up. It really was that horrible so, yeah, that made my day.

And yeah, the list is endless of the many things the authors have dredged up here... although I wish they’d also covered, in their section about music, Jeff Wayne’s War Of The Worlds concept album (The Red Weed theme brought the chills to every kid I knew). There are, however, a couple of things which bothered me about the book...mainly to do with the design.

Although some sections are double columned, most of them are not and the text goes straight across the page like it would on a regular paperback. But it’s a very hard thing for a human to be able to read in that fashion if the print is as small as what’s been used here. Design tenets like ‘length of line’, eye flick and so on come into play and there are only a certain amount of words a line that a person can comfortably cope with before it just becomes too much of a hassle. So what I’m saying is... you really have to want to read this thing if your subconscious brain is going to persist with this venture. Also, a friendly note to those who don’t think to account for the ratio of the size of the type to the length of a line... if you double column a long piece of text, nine times out of ten it will take up much less room on a page than if you keep it to single lines like this. Try it out if you don’t believe me. The page count could have either been less or, you know, the point size could have come up if it was double columned.

The other thing which really niggled me is the constant references to other articles in the volume. Yes, a very useful reference but not when, as in 90% of it, the page numbers it points to are... ‘xx’. Yep, somebody has forgotten, I would guess, to go back and fill in all the references and just left a temporary xx in and gone straight to print from that. I don’t know if this has been put right in future print runs as I bought this tome a while ago now bit, yeah, that was more than a little annoying, it has to be said.

Those issues aside though, I’d have to say I would recommend this well written, fun and exciting tome wholeheartedly. if you want to grab a copy, the place to go for it is here and you can also order Volume 2 - Television In The 80s here which I will be cracking open myself sometime in the next few months. I can recommend Scarred For Life Volume One - The 1970s enough for people of a certain age and I am certainly looking forward to following up with both the second volume and, hopefully soon, ordering the third in the ongoing series when it becomes available. Definitely worth a look. An entertaining and, dare I say it... educational, enlightening read. Expecially when it comes to girls leaping out of windows and exploding, for sure.