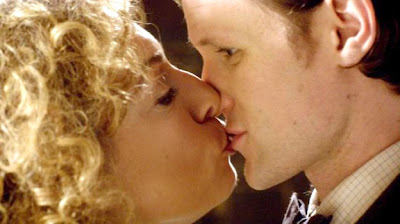 WHO do you think you are kidding Mr. Hitler?

Warning: Yep. Loadsa spoilers bound to cascade into this review as I write it. Don’t be reading this if you haven’t seen the episode but are intending to at some point soon!

Well that was just utterly brilliant, mad fun and unbelievably did-you-really-just-drop-the-ball-that-badly-Mr.-Moffet-? both at the same time. Maybe it’s just because I’m three quarters of the way through what is almost certainly the dullest and most unredeemable series of Torchwood imaginable at the moment, but for once the parent show of the that particular spin-off managed to give me the heady cocktail of fast moving science-fiction and generally the best all round Doctor Who-ing in an incredibly long time.

There were, however, downsides to it and these downsides were pretty hefty dents in the Gallifreyan armour I'm afraid.

Still, it certainly went somewhere I didn’t expect the episode to go... well... even after it started telegraphing itself in the pre-credits sequence. And, of course, the wonderful episode title which they hit you with at the end of the mid-season finale, which by the way BBC, I’m so totally not buying into as it’s a stupidly ignorant contradiction in terms (mid-season "finale"... what rot!), “Let's Kill Hitler” is a bluff lured you into watching what was, admittedly, an astonishingly strong episode which, it has to be said, moved along at a rate of knots which I truly wasn’t expecting. Who says expositional dialogue set-ups for future episodes have to be dull? This one certainly wasn’t. And, of course, it was absolutely nothing really to do with killing Hitler whatsoever... but "Hey! Made you look!" I guess. That's what they were thinking, right?

So we had a very strong opening pre-credits sequence where a totally new character turns up after Amy and Rory have brilliantly summoned The Doctor with a dynamically scrawled home-made crop circle style rendering of his name... or term such as it is. After the titles have finished rolling you get a potted history of this character being best mates with Amy and Rory throughout their life together as they all grow older and by now you’re all probably thinking to yourself... well that’s probably another incarnation of River then is it? Because, you know, new character suddenly dropped out of the blue and given an entire history means it probably somebody important and, frankly, you’re not going to have many important people wandering around the Whoniverse that you don’t already know, are you? And since you know Moffet is hit and miss but he’s certainly a lot smarter than to drop a bit of story like that spun totally from air for the sake of convenience... then you do kinda suspect it. Jasper Fforde already caught me out that way with his "Granny Next" character in the "Thursday Next" novels which I thought was an incredibly bit of totally new character pop-up bad writing in the second book... until I read the fourth book. Same kinda thing here... just a ten minute wait instead of a couple of years in book terms for the resolution. So telegraphing early on then but, you know what, it doesn’t matter because it’s such a brilliant episode that you can forgive the writer from quickly running through the wet paint out of that corner he’s painted himself into.

Now then, the next bit does matter as it seems, at least on what we know so far, that it was a real clunker. River Song's regeneration into the woman we best know her as was a great entrance and Alex Kingston played the part with absolute relish and had fun in this “earlyish” version of River Song... however, after she’d poisoned The Doctor and been machine gunned by a troop of Nazis we hit a problem. She absorbed the bullets and flung out burts of “timelordy” energy to knockout her antagonists and came out with the line that you should never try to kill a gal mid-generation. Hang on a minute folks. We’ve already seen what happens when you kill a timelord mid-regeneration remember? He dies by a lake in the US of A! He doesn’t get a second wind and turn up right as rain does he? No... he gets burnt on the water by his friends.

But that’s alright... it was such a great episode anyway and I’ve got every confidence... well... every hope that Moffet will sort all that out before the final episode (please keep it together... please!).

1. Amy and Rory give birth to Melody Pond.

2. Melody Pond is kidnapped and programmed to kill The Doctor.

3. Melody Pond, dressed as an astronaut and rising from the lake, kills the Doctor... but she must know she failed (or at least think that because there’s another younger version of The Doctor on the scene soon after). So she comes for him again but Amy shoots her... she regenerates at the end of Day of the Moon and goes on to...

4. Grow up with her parents as their best friend (making sure they get together to give birth to her) until she sabotages the TARDIS by shooting it, gets shot, regenerates into Alex Kingston and attempts to kill the Doctor with a poison kiss before saving him in a fit of “identity recognition guilt” by giving up the energy for her remaining lives (not that she’s strictly a timelord or anything but nice to know they’re now going to have to categorically address that rule at some point soon... maybe even in this current series).

And that was almost it... brilliant action, humour and witty banter all the way through except... yeah there was another big clunker which may or may not be the fault of the writer... could be an editing thing. Amy Pond robot zapped Amy and Rory and miniaturised them... why I don’t know because the robots were only going to kill them anyway. However, when Amy and Rory wake up miniaturised inside a mechanised Amy Pond... they instantly know that they have been... well... miniaturised inside a mechanised Amy Pond. How? Not even The Doctor’s figured that one out yet! How do these characters suddenly get this kind of knowledge? Maybe it was in a scene that was either not shot or edited out... or maybe it was just bad writing. Either way... it was a bit of a leap to ask of the audience I felt.

As was the other clunker. Amy sonics everyone on the mechanised Amy’s bracelets, including her own, which revokes everyones privileges over the mechanised beings that seem to be “running” the... well let’s call it a “mechanaut” shall we? I feel that’s a good term for it. So how is it, after that’s happened, Amy can still ask for access to their records. No family privileges for The Doctor’s files I would imagine.

So there was that... which was a real clunker of a how-to-move-a-story-on-device if you ask me. That and the fact that all the above timeline isn’t quite as complete as it should be. We have, after all, seen an eye-patch wearing version of River, echoing evil eye-patch lady, in the trailers for this half a season... so there’s more revelations coming I reckon.

But.... you know... wanted to like this one and it turns out I did. It delivered in spades and is easily the best episode of the current series so far for me. I know not everyone will agree with me as I heard bad things about the previews... so what? I can only judge it by my own standards and this one hit all the right “fun” buttons for me. Strong "mid-season opener" Mr. Moffet... even if that is a contradiction in terms!
Posted by NUTS4R2 at 21:09