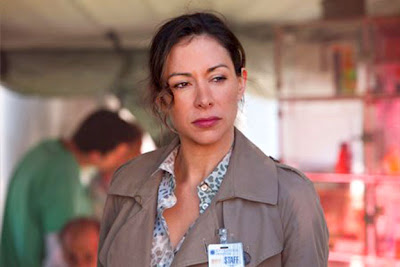 Ok... so as I was watching this one, what was probably the dullest episode of Torchwood so far, somebody else in the room proclaimed... “They’ve really killed off Torchwood haven’t they.” He wasn’t talking about Torchwood, the once undercover agency of the Government set up by Queen Victoria after an encounter with The Doctor and Rose Tyler. He was talking about the programme itself, which is now not even a shadow of it’s former glory which it found in its second and third series. And though I wanted to defend the programme against this comment, I realised that I really couldn’t. He was right on the mark about this one. This isn’t Torchwood... it’s merely an ailing spin-off.

So far, in my humble opinion, we’ve only had two really cracking episodes. We’re at the halfway mark now of this serial and so that means that less than 50% of the episodes, in my book anyway, have been less than succesful. That these are not stand alone stories just rubs salt into the wounds because the problem with serials is that their structure ensures that they tend to get judged on the sum of their parts, rather than on those particular individual parts.

This week’s individual part was quite surprisingly dire and unrevealing when it played out. The camerawork was a little more dynamic than the previous episode... not exactly in the same style as earlier episodes but not as static as last week’s episode... the camerawork didn’t really save it, however. And bang goes my theory that different writers determine the success of an episode, as this writer had written a really fun episode earlier in the series and then... well this one dematerialises up it’s own allusions in a really uninteresting manner. I know I’m being harsh now, perhaps, but honestly people... we’re half way through the series now. Unless we have 5 really solid episodes in a row, things are going to be hard to turn around and certainly they won’t help attract back the audience that’s already jumped ship on the programme. This is why a series/serial needs to start off strong and ratchett up the tension... not dawdle about in its own ethos. I’m really beginning to see how that few great things about the show... Captain Jack’s larger than life personality, Gwen Cooper's hard-gal-with-a-heart Welshness and Bill Paxton’s show stopping performances as Oswald Danes... are unable to outweigh what this programme has slowly become.

Last weeks teaser had footage of Gwen Cooper apologising for the inadequacy of Torchwood against the horrible revelations they’d found and said revelations were promised. Although it had been done before in Torchwood, it still created a certain sense of promise or tension. However, not only was this episode not in any way revelatory... it didn’t even feature any of that footage of Gwen on the video. What’s up with that? Did it all get cut at the last minute... too late to change the previous teaser? Was it in the American version of the episode but not the English version? What’s going on?

The so called “revelation” of the health cmaps being Nazi-like ovens to burn the “returned but severely damaged” dead seems to make no apparent sense as to why the company in question would set about creating this situation in the first place (hopefully I’m just not realising the bigger picture yet) and instead seemed to be a dramatic device so we could watch one of the central characters burn to death. I was expecting one of the regular characters to die soon, in the traditional Torchwood manner, but not for that death to be so clumsily reached. It wasn't the fact that it was an unneccessary death that made it so rubbish... unneccessary deaths can be quite dramatic... but this whole plot device seemed to be there just to serve this scene and there were much better ways they could have dramatically pushed a point like this across than have a character just happen to get shot and stored in an oven until another character was in place to witness her being burnt alive. Not particularly smart and, in this particular case considering this kind of death-by-fire almost always gets under my skin, rendered surprisingly unshocking by the way it was shot. Can’t put my finger on what was wrong exactly but the timing or something of the build up and release just seemed wrong and a litle antiseptic. This is just no good.

So this episode has left me feeling like the next five episodes, which I will watch because I hate giving up on anything, will be something of a chore to witness. I can only hope that things step up a pace both in terms of action and in terms of general intelligence. I’ll keep writing these little reviews of them more as a diary for myself of what I thought of them at the time as opposed to the hope that anyone’s going to bother to read them. After all, with a series that’s become a dull echo of the greatness it once had... why would anyone want to read the autopsy after. But please, read some of my other reviews if you get a chance... they’re not all this negative and you may find something you like better.