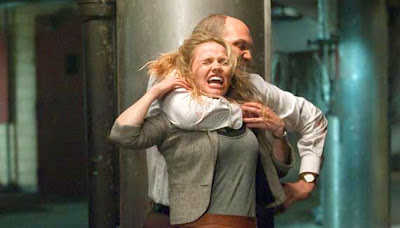 Middle Of The Road

OK then. This is going to be another short one because I really don’t have much to say on this one.

Last nights episode of Torchwood was... not that hot. And when I say not that hot I mean, mostly pointless and some might say unwatchable. I am the last person I know (other than people on twitter) who is still watching this train wreck of a fourth series.

Last week we saw one of the regular characters being burnt alive for no real reason, it seems - hopefully they’ll have addressed that little loophole and it’s a clever and complicated ploy, leading into a brilliant explanation for that. This week’s episode felt more like an autopsy of overemotional characters merely reacting to those events and dealing with the aftermath in extended and mostly uninspiring scenes that might have been better handled in a five or ten minute sequence instead of the majority of an episode.

To borrow a conclusion from the awesome Hypnogoria in his review of last weeks episode (his website can be found here at http://hypnogoria.com), it really does now seem like the original Torchwood cast have become guest stars in their own show. The majority of the “action” in this weeks episode was based with Rex and Esther trying to come to terms with the events of last week... but it all just felt like “We’re going to get to the end of the show too quickly guys! Can you pad it out for a few episodes do you think?” And that’s exactly what most of this weeks Torchwood felt like... uninspired padding.

There were some nice little sequences with Captain Jack and then Gwen, especially involving those “special” contact lenses inherited from previous incarnations of the show. Ultimately, though, these special items have been subverted in the last few minutes of the show in the way that I’d thought they were going to be used in Series Three, Children Of Earth, when that season aired... so it all just seems like a logical, dramatic extension to me. And Gwen, while she’s been nicely handled so far in comparison to some of the characters in this incarnation of the show, did seem a little gung ho and “out of character” this week. Hurling a brick through a car window to break into it is one thing but... blowing up a government institution in such a way that, supposedly, kills loads of totally innocent people to make a point doesn’t really seem her style in my book.

Also, the one new feature of the current series which is actually kind of interesting, that new feature being Bill Pullman’s portrayal of Oswald Danes, is completely absent from this episode. It’s like they totally forgot about it because... well, presumably because they had too much “padding” to contend with this week?

Either way you look at it, this series of Torchwood has only had a couple of really cracking episodes which were a shadow of the former incarnations of the series and this weeks contribution was one of the dullest and unnecessary yet. It really hurts me to be this harsh about a show I’ve been watching for a while (which is made by so many hard working and creative people pouring their sweat and life’s blood into these episodes) as there are very few TV programmes that I actually do watch these days... but there’s no point in writing a review and not telling it like it is. Torchwood needs to get better very quickly... not because I think it has a chance of being picked up for a fifth series... but because I’d rather see it end on a magnificent high and not leave a bitter taste in the mouths of die hard fans of the show. Maybe I’m a fool but I’m still keeping my fingers crossed. Getting painful though.
Posted by NUTS4R2 at 11:04