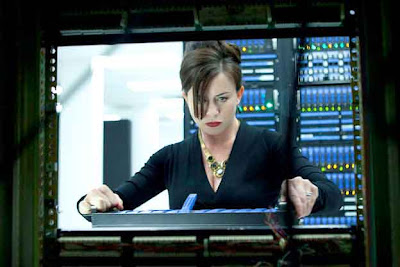 LA Quartet
Torchwood - Miracle Day Series 4
Episode 4: Escape To LA
Airdate: August 4th 2011. UK. BBC1
Ok... this is probably going to be a short but not so sweet review of the latest Torchwood because, frankly, this is the worst episode we’ve had so far this season and I’m beginning to understand the problems with the new format I think.
First up, the cinematography in this episode seemed quite pedestrian compared to some of the more dynamic stuff we’ve had so far. Yes, I was complaining about the over-use of handheld, catch things “as they happen” style of camera work last week but this, more statically shot episode (apart from some nice camera work in one of the outside location sequences near the start) didn’t really match the visual style of the story telling (that I’ve been aware of) of previous episodes and so it just felt like it didn’t tie in as well.
The pacing of the episode was also slow and dull and, for the most part, didn’t keep me half as gripped as the tease of some of the dialogue toward the end of the show did either. And that was just due to the content of the dialogue in terms of the advancement of the story, as opposed to any real wit or sparkle or emotional pull from the dialogue itself. Thought the writing on this one was fairly poor.
Don’t get me wrong. There were some nice sequences here also and the occasional, enjoyable one-liner, but overall I just was so unenthused by this episode... unlike last weeks brilliant offering. Episode highlights from this one would have to be the opening location work in LA and the enemy infiltration and subsequent “showdown” with a gone-rogue-and-independent-at-the-drop-of-a-hat assassin. Standout of the episode was the wonderful Vera Miles as Gwen, all dolled up and looking like she stepped out of a Modesty Blaise comic-strip... in fact, I’ve just realised what a good Modesty Vera Miles would make... somebody needs to jump on that quick.
I’ve got problems with the storyline now. The villains are being kept deliberately sinister and this is normally kept up to maintain mystery if the audience already knows who the villains are from a previous adventure... but I don’t see how that can really be happening on this “reboot”. I’d seriously love it to be The Silence and tie in with the second half of the latest Doctor Who season... but I just don’t think something like that will happen in the shows inaugural US produced series. I’m guessing humans are being harvested and whatever they are being harvested for (meat for food or whatever), the consumers need their “stock” to be still alive. Maybe... maybe not. It’s a theory. Unfortunately I’m just not that worried about it at the moment.
Also, does anyone else think Oswald Danes is going to be thoroughly despicable right up until the last five minutes of the final episode... when he suddenly realises what’s at stake and saves the day in some self-sacrificing way? is that character’s set up really going to be that obvious?
I think the problems of having a show like Torchwood which is... in this case, a single story ark, is that having a different writer and director plugging in to various episodes may be seen as fresh, and is indeed a regular practice on non-serialised stories, but it just leads to a lack of generally feeling like a whole show in the case of a serial format like Torchwood. It feels and looks fractured in style and this stylistically disjointed atmosphere is not necessarily the best breeding ground for this kind of story to gestate in and flourish from.
Next weeks episode looks like it’s going to be a lot darker and more intense but the whole Eva Myles, talking head into a camera to spell out how much trouble mankind is in and how nothing can be done to stop it is something which, while effective, has been done before... just in the last series of the show, in fact. So nothing new there.
Okay, so I’ve probably been a tad harsh on this one but only because I really care about this show and was hoping it might have the power to survive for a fifth series (although that seems to be looking increasingly unlikely from what I’m reading). I’m sure this was just one less than stellar episode in a more interesting “whole”... at least that’s what I’m going to keep telling myself in a house where the other two regular viewers of this show are just about ready to give up on it. I’m going to hang on in there until the bitter end though... I kinda like Torchwood!
Posted by NUTS4R2 at 18:56