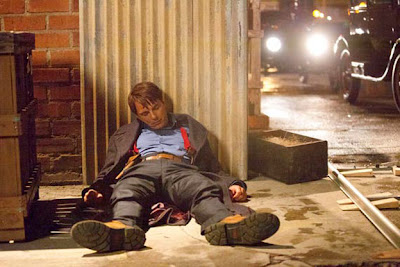 Gwen Is Mightier
Than The Sword

Well, this really is going to be short and... well, probably not sweet. There are really no spoilers... depending on your definition of spoiler.

Last night I saw what was probably the most boring and completely superfluous episode of Torchwood I've ever seen. I went to bed thinking about how I was going to get through writing this review but, this morning, on the bus on the way in to work, I thought of two positive things I could say about it. As the day goes on though, I have to say that one of those positives is turning into a... "Meh... that’s no big deal."

Last night's episode was essentially two double-handers intercut with each other from two different time zones... the present Torchwood time zone with Captain Jack and Gwen picking up from last week’s not so great cliffhanger and 1927 America, with Jack and his newfound Italian lover of that era. The 1927 plot just suddenly dropped in out of the blue to suddenly try to start explaining the final solution of Torchwood: Miracle Day is, frankly, bad storytelling. If you’re going to do this... rather than pad out a long boring episode with great chunks of mind numbing, slow paced (for an action show like Torchwood) nothingness that could have easily been made up on the spot without any serious links to a “real” end solution embedded properly into the story, then you really want to do it in gradual tiny doses... say 5 minutes an episode, so you get a sense of history of the problem slowly developing over the course of the story and not just something that’s been dropped in from the “answer book” right near the end. People can easily follow that kind of stuff if you do this and, in fact, it tends to bed in people's minds more deeply if you do it more subtly like that!

My one positive on this episode was the absolute gorgeous, almost sepia tinted cinematography on the 1927 scenes in the episode (which were beautifully contrasted with Jack’s blue shirt) coupled with great shot compositions. But these sequences were rather tedious to say the least.

On the other hand, Jack and Gwen driving to a showdown seemed quite punchy and more like the old Torchwood... until i realised that watching wet paint dry cross cut with those 1927 scenes would have seemed more punchy and like the old Torchwood in comparison. Anything would. So, although the modern sections seemed faster paced and more relevant, considering that everything which was set up in last week's cliff hanger was undone in the last minute or two of this episode... I have to say that the modern sequences were even more of a letdown and it felt like some serious padding exercises were being performed on the running time here. Everything in this episode could have been done in ten minutes and edited into another similarly padded episode... so this really was quite insulting, at least to this viewer.

I don’t know where this is going anymore and I really don’t care that much either. This was shabby story structuring clear and simple. That’s my opinion anyway and if you don’t like it then don’t bother reading my reviews. This has been the most disappointing series of Torchwood ever... and I really like Torchwood. Please bring back the proper Torchwood after this! This is kinda heartbreaking to watch.
Posted by NUTS4R2 at 18:35