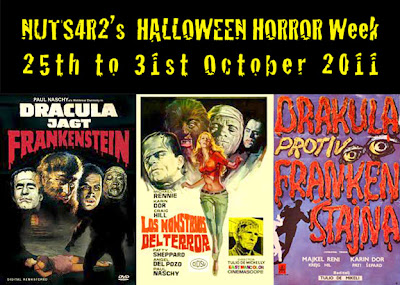 Rennie Dreadful?
Assignment: Terror
(aka Dracula Versus Frankenstein aka
The Man Who Came From Ummo)
Spain/Germany/Italy 1970
Directed by Tulio Demicheli
The Camden Collection Region 0
Spoilers: This review pits spoiler against spoiler in a spoilerific mash-up that can only end in inevitable death by big explosions!
Okay... let me make something clear before I start my review of this awesome movie. This film is not to be confused with Al Adamson’s 1971 movie Dracula Versus Frankenstein (despite having the same title in some territories) which I’ve already reviewed here. Neither is it the version being sold in some countries on DVD as Dracula Versus Frankenstein which seems to be cut down by almost a half an hour. This “review” version is pretty much uncut... although it’s probably not in its correct aspect ratio.
This movie was the last film made by everyone’s favourite peace loving alien Michael Rennie (Klatu in The Day The Earth Stood Still) but in this movie he’s playing the bad guy... well, bad alien in fact. Sent to earth by his alien superiors, he is assisted by two resurrected earth scientists (one played by Karin Dor, who played the first German Bond girl in scenes in You Only Live Twice) in his attempt to kill off and control the planets population by... wait for it... resurrecting four of our worlds supernatural monsters to create a force of deadly destruction... or at least a fresh supply of victims to hold mankind enthralled in the fear created by its own superstitious beliefs.
I’m guessing this would take quite a lot of time to do since these monsters are not the size of a behemoth but what do I know. The similarly plotted Godzilla movie Invasion Of The Astro Monster (aka Godzilla Versus Monster Zero) seems to me to be a much more credible version of the same plot line in that, at the very least, monsters like Godzilla, Rhodan and King Gidhora leave a much more effective wake in their particular force of deadly destruction.
To be more specific... Michael Rennie’s plan involves bringing back to consciousness and using Dracula, the Frankenstein Monster (called something very similar, presumably to evade copyright but there’s frankly no doubt on screen as to who this Karloff-styled creature is supposed to be), The Mummy and The Wolfman and setting them loose on the Earth faster than you can say “Klatu Baradu Nikto.” And if that’s not interesting enough... The Wolfman character in this one is none other than the great Paul Naschy in his Waldemar Daninsky wolfman role. Naschy also wrote the movie and this is only his second appearance in the role (not counting the possible “lost” movie in the series). Unlike many of the later Waldemar Daninsky movies, Naschy’s wolfman character is actually given a credible explanation for being resurrected (instead of just reappearing as though the last film in the series never happened). He has almost no dialogue for most of the movie and very much plays a supporting role until the final third where he returns to his former glory and does a very creditable job... making the part his own once more and giving the role a certain conviction.
Dracula is brought back to life in exactly the same way he is brought back in Universal’s House Of Frankenstein, by removing the stake from the chest of his skeleton which is being exhibited in a side show carnival. This is almost certainly a deliberate homage from Naschy, who loved those old movies, but the make ups on both Dracula and the Frankenstein monster are... well not terrible but not great. The Daninsky wolfman make up is fine, however, but the one make-up job which really is quite good on this one is The Mummy... which manages to capture and crossbreed the withered Karloff as Imhotep face from Universals original 1932 version, with the walking bandaged visage of Kharis played by both Tom Tyler and Lon Chaney Jr in the sequels. The Mummy in this film is pretty eerie... although he doesn’t do that much, it has to be said.
Above all though... this movie is fun with a capital “F”! The policeman trying to work out the cause of the strange deaths in his city has a groovy, sixties, swinging theme tune that follows him around in his investigation and a main squeeze, who is “sixties cute”. They are, of course, no match for Michael Rennie’s permanently smirking alien villain but this is okay because Waldemar Daninsky comes to the rescue when our hero is ensconced in his vampire-bat death trap and as for Rennie, well he’s on to a loser from the start as his freshly undead human scientists fall prey to weak human emotions such as love.
This film is a great laugh. I can only refrain from commenting on the artistry of the cinematography because I’m pretty sure the transfer I saw is, as I said previously, in the wrong aspect ratio, but the film ends up with monster fighting monster... I especially liked the bit where Naschy’s wolfman traps The Mummy in something which is very similar to a mouse or hamster exercise wheel and then sets fire to him. Very funny... err... I mean chilling, very chilling!
There’s not really a lot more I can say about this film without damaging it in the eyes of some but certainly raising its credibility in the eyes of others. Seriously folks... this is a Paul Naschy movie from the Waldemar Daninsky canon that involves space aliens trying to conquer the earth using Universal style monsters... how could this movie ever put a foot wrong? Answer... it doesn’t. It’s brilliant trash and it seriously deserves a proper, commercially produced widescreen transfer... and so does its modern audience, most of whom exist without any proper access to this movie. Get on the case now. It’s brilliant!
Posted by NUTS4R2 at 20:55