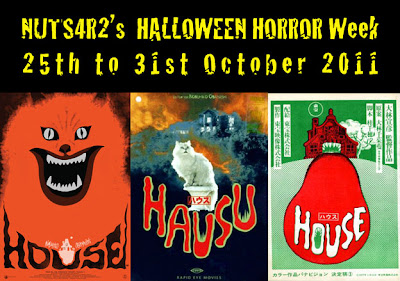 House Rules
Hausu (House) Japan 1977
Directed by Nobuhiko Ohbayashi
Criterion Collection Region 1
When I first watched this movie the other day my first response was... how can one use mere words to be able to describe the absolute head-shagging madness of it? For a while there I was at a loss for words but, as my regular readers will know by now, I’m rarely at that much of a loss for words for very long... so my best bet to try to get through this review and make some kind of sense of the images and sounds of the Hausu experience is to take it slow and list my impressions of the film as I go along.
So what do I know for sure? Well, Hausu is a horror movie... although I have to confess that for the first half an hour or so I had my doubts on this. The whole film, you see, is infused with the style of... well not to put too fine a point on it... a Saturday morning Hanna-Barbara cartoon show crossed with an episode of Sesame Street. That’s my best way of describing it. The actors and actresses pretty much look like they’re having some tongue-in-cheek fun but I suspect none of them realised just how wild and basically wrong (in that good kind of way) they would look like after they’d been fast edited and jump cut to death against a deliberately overloud cartoon style score with wooshy sound effects and general kids anime-paced rhythms. This movie is madness.
And it all manages to work quite well... the mad, inappropriate sensibility is never really subtle and it pops out at you right from the start... although it does, to be fair, get more furious with the pacing and mixed media collage techniques used on screen to augment the director’s vision... like he’s some kind of extra crazy Jan Svankmeyer on acid!
Oh wait, did I say “pops out at you”? Perhaps a better way of putting it would be the sheer bizarre and fun hilarity of this movie is so awesome it’s like it just jumps out of the frame and starts slapping you around the face with a crazy metaphor of a jazz-funk porno soundtrack while repeatedly dropping bunches of bananas on your head!
It’s like nothing I’ve ever seen before. I’m not saying it’s totally unique because it almost certainly isn’t... I’m sure there’s been a lot of movies which have attempted, either before or after, to reach the same dizzying heights as Hausu... it’s just that they haven’t necessarily been imported or been well enough received by audiences to warrant importing into English speaking countries before this. This is really different and the whole thing really does seem to have been directed like a cartoon (or should that be anime?).
The story of a bunch of High School girls who go to stay with the dead, as it happens, aunt of one of the girls is a real trip. Each of the girls have a single, identifying name which matches their character... Gorgeous, Professor or Melody for example. This is sometimes reenforced in the sound design... Melody is usually accompanied by the “spooky house” thematic material and whenever "Kung-Fu" does something which is Kung-Fu like... the music takes on the funky seventies aspect of the fight music in an episode of the TV series Monkey. There is some great stuff going on here.
However, it is a horror film too and... well I don’t want to give away too much of the sheer wonders on display in this movie but... flying decapitated heads which bite you on the bum, eyeballs peering out from mouths, dancing skeletons and a piano which may bite you but will certainly come back later to eat you bit by graphic bit and still use the fingers it tore from you to keep the piano melody going.
This film rocks in so many ways that it’s really hard to pin down the tone for a reader without getting too bogged down in semantics. There is gore and even some nudity in the movie... and then, at any moment, the music tells you that Big Bird or the Cookie Monster are just around the corner. You won’t know whether to laugh or scream in some sequences. It’s bright and colourful (Bava colourful!) and has some wonderful scene transitions that almost but not quite threaten to seem like they’re the brainchild of a video editor with some brand new, rocking, video editing software and he’s going to press every button in the manual and throw it all in there.
There are a few little sequences where the movie catches its breath a bit but these are mostly within the first half an hour... after that your brain isn’t going to get a chance to stop moving. This is “movie making” in capital letters with each letter coloured in with a different neon shaded tint and a big bugger of an exclamation point crashed in on the end. I’m not sure I could possibly recommend this to everybody but I know I’m going to be lending this one out to everyone I know who will be able to handle it in terms of why such a movie might come into being... and why such a movie was not an error on the part of the director in the first place. This is so much more than just a horror movie...
it’s a HORROR  MOVIE!
NUTS4R2’s Astonishing Trivia Treats: Hausu is one of the very few movies I know that actually includes a character who is a film score composer. Gorgeous’ dad is one, although he’s not in the film for very long. He makes a reference to Sergio Leone preferring his music to that of Ennio Morricone’s.
Posted by NUTS4R2 at 19:50