Humanoids From The Deep 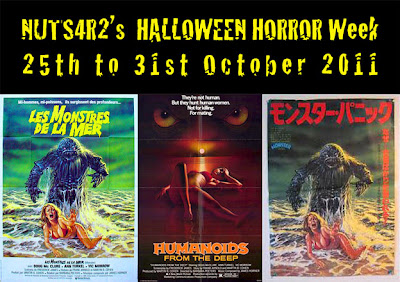 Fish Fish, Bang Bang
Humanoids From The Deep (aka Monsters) US 1980
Directed by Barbara Peeters
Shout Factory Region 1
Wow. I’ve been so wanting to see this movie from years and now, thanks to Shout Factory who have been releasing a whole spate of less than stellar Roger Corman produced classics (as this one is), I am finally able to grab a copy in a beautiful transfer with a tonne of extras. It could, of course, be argued that movies like this, Battle Beyond The Stars and Galaxy Of Terror are perhaps being given much more affection and deluxe treatment than they deserve... but you certainly won’t catch me saying that. Shout Factory have produced some of the most interesting titles on DVD over the last year and are beginning to have the same clout and reputation, to my mind anyway, that Anchor Bay used to have 10 or 15 years ago with their groundbreaking giallo and horror releases.
I once bought a bootleg recording of the now world famous composer, James Horner (but let me call him Jimmy), which was a double bill soundtrack of Battle Beyond The Stars and Humanoids From The Deep. Id never heard of Humanoids From The Deep but the score was pretty amazing (we were all lured by the young, early works of Jimmy Horner in our more innocent days) and I hoped that I’d one day be able to see the score within the context of the original movie.
Well that day is here and let me tell you that this movie is everything I’d hoped it could be. It’s trashy and terrible and unintentionally funny and, basically, as fun a time as you can get with a movie. I don’t know where to start but I’ve got to start somewhere so...
Let me mention the cast first. The film top-lines a pudgier and older than his heyday incarnation of Doug McClure. As the saying goes, at least with his composite Troy Donahue parody character Troy McClure, “You may remember him from”... well now... loads actually including TV shows like The Virginian but, primarily for me anyway, fond childhood memories of McClure in the 70s... as the main lead in shoestring epic fantasy movies like The Land That Time Forgot, The People That Time Forgot, Warlords Of Atlantis and At The Earths Core (reviewed here). Being in such films I wasn’t expecting to see him turn up in a Roger Corman movie filled with goriness and nudity.
But that’s basically what Humanoids From The Deep is... it follows the classic Corman recipe of frequent and constant bursts of sexuality and violence in a way that I was just not used to seeing adhered to quite so luridly before in a Corman movie... especially not with Doug McClure in the cast. Doug plays one of a group of fishermen in a small town who are having disputes with another group of fishermen over genetic improvements to the fishing (or some such... I don’t remember if I ever figured out what they were arguing about during the course of the movie but... who cares... sometimes you just have to let art wash over you, as they say), punctuated with fighting and racial tension.
Anyway, while all this disputing and fisticuffs is going on, the genetic tampering company in question are refusing to take seriously the warnings of one of their star scientists, played by the lovely Ann Turkel (still haven’t tracked down that Modesty Blaise pilot movie she made back in 1982), that they have accidentally created a race of fish people under the sea. Turns out that they should have listened to her because it isn’t long before the fish people... sorry, "the humanoids from the deep", are terrorising the towns population by killing first the dogs and then the menfolk and also, while said killing and terrorising is taking place, ripping the clothes off any handy female characters and raping them. Because that’s what fish people do when they see our women, apparently... they have sex with them and then bury them under the sand so they can have weird, fishy/human spawn lurking with intent.
There seems to be no end to the amount of fun this film can supply... not just with the constant nudity and violence but also because the way the characters are written is just so cliché that it would be very hard not to accurately predict within any given scene, just what arc those characters are going to follow in relation to each other. And all the time we have gruff and heroic Doug McClure to fight the marauding fish people and defend the bigoted, racist people who live in his town. It has to be said... sometimes you’re not sure if you should be rooting for the humans or the fish. But I honestly don’t think that matters, to be honest with you.
Since watching this movie last week there’s been a bit of a coincidence in that the first "official" score release CD of Humanoids From The Deep has been announced in a very limited 1000 copies edition. Can’t wait for that one to arrive. The other thing I found out is a real mind bender though. Turns out that Humanoids From The Deep was remade in 1996 as Roger Corman’s Humanoids From The Deep. Hmmm... seriously? This film needed a remake? I bet that one’s not half as much fun but I’m going to try and track it down anyway. I can’t vouch for the remake here, of course, but if you want to watch a fun filled romp with gore, violence, topless ladies and some of the most stupidest riffing on Creature From The Black Lagoon costumes fish people you ever did see... then Humanoids From The Deep is the movie for you. They don’t, quite, make them like this anymore.
Posted by NUTS4R2 at 20:44