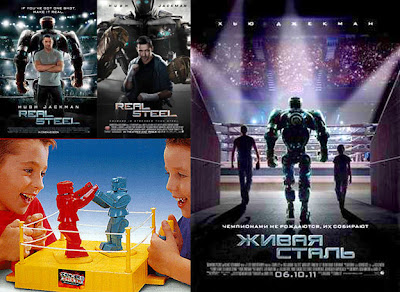 Steel Got It!
Real Steel 2011 USA/India
Directed by Shawn Levy
Screening at UK cinemas.
Warning: Rockem Sockem spoilers coming your way.
Real Steel is a film that is partially inspired by Richard Matheson’s 1956 short story Steel (made into an episode of the original Twilight Zone) and partially inspired by a toy I never owned but always wanted as a kid which involved two boxing robots trying to bash each others heads in called Raving Bonkers (in the USA this same game was called Rockem Sockem Robots which, to be fair, is a far more descriptive, does-what-it-says-on-the-tin name for the game).
Even so... I was a little bit worried about not getting what I wanted, or even needed, from it.
Now if you’d have told me once that I was going to be worried that a movie company could fail to deliver to my expectations on a movie about boxing robots punching the heck out of each other then I may have taken those words of caution with a pinch of iron filings but, now I’ve experienced both the second and third Transformers movies, I have grounds to be doubly suspicious that modern directors can screw up even the most formulaic mechanical mayhem and leave you with a less than palatable taste in your mouth.
So how did this one do?
Well, I’m happy to say that, Real Steel held my interest for the full (and definitely over-long) two and a quarter hour running time and I say that even though there are some things about it which are real negatives. But that being said... there are also a lot of positives in there... although the opening credits mentions that there are animatic robots in it which I suspect is a lie. I can’t quite believe that the robots are done in this manner. This film is pretty much CGI... or they’d be doing these kinds of tournaments for real already. Believe me... this stuff is several steps up from an episode of Robot Wars.
The main elements of this story are made up of basically “everything you’ve ever seen before”... there’s no real originality in this movie whatsoever apart from the odd bit of cinematic window dressing to remind everyone that this movie is set in the future (because the presence of giant, boxing robots is just not enough of a clue for modern audiences, right?).
The film tells the story of a washed up boxer played by Hugh Jackman who does appallingly badly at his new career of Robot Boxing... "we’ll send the boys around to break your legs if you don’t pay what you owe" kinda bad. Then his young son who he abandoned at birth comes into his care for a period of a month or two and together they conquer the world of robot boxing and in the process bond, cultivating a proper father/son relationship which allows the boxer to mature emotionally and become more of a person to those he cares about.
So let me tell you in essence what this film is then... it’s formulaic, incredibly schmaltzy and the writers, producers, directors and performers do everything they can to sucker punch you in on an emotional level and exploit these values to give you an uplifting experience which, obviously, means more coffers at the box office.
And you know what? It doesn’t matter.
Yes, this one is formulaic and schmaltzy but it’s formula and schmaltz carried off with such competence and aplomb that it puts a lot of other Hollywood movies of recent years which have tried to press those same buttons to shame and all the while it’s pitching it to us with the basic science fiction values which allow writers to take that kind of emotional exploration up to a whole new level, which is impossible in less speculative genres of fiction... celluloid fiction or otherwise. The movie may well be dealing with the exploits of a broken down, underdog of a robot but the astonishing level with which this one pulls this off is definitely ripe for a metaphor comparing the production of this particular piece of sentimental fodder to a well built machine... a well built machine that will keep on punching and punching at those emotional buttons until it has you on the ropes.
The performances by all the actors are great and, even though you know they’re suckering you in for the emotional poundings and the film is “unbelievably predictable” from scene to scene, you still invest in them because you respect their work. Similarly, the special effects are effective and the film is a real piece of storytelling... even if it’s a story you’ve seen so many times before. And, although it’s quite a long film (which it really didn’t need to be... some judicious editing might have improved things) it still ends in just about the right place. It recognises the traps within its own set up and doesn’t try to put those things right at the end of the movie... there’s just enough closure in there that they don’t have to ruin it with a proper resolution.
In short then... if you like the odd American blockbuster and you don’t mind treading on very familiar storylines and plot points you’ve seen a million times before as long as it’s done right... then go see this movie. It’s done right!
Posted by NUTS4R2 at 18:54